Getting Around Alaska, a Transports Guide

Alaska, which shares a border with Canada, is isolated from the continental US. Its Aleutian Islands are closer to Siberia than to the hustle and bustle of New York or Chicago.

But you don’t need a passport to go to Alaska, thanks to a deal made between the Russians and Secretary of State Seward back in 1867. Getting to Alaska is easy as there’s only three possible routes: fly, go up the Alcan (Alaska-Canada Highway), or sail the Inside Passage.

Getting around once you’ve arrived in Alaska is more difficult. The 49th state is massive, sparsely populated, and has limited demand for public transportation. Go between late April and the end of September unless you have a date with a husky. 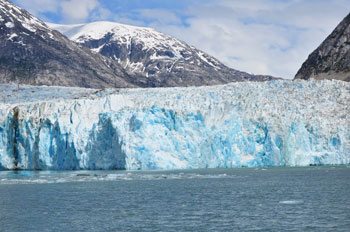 -The Alaska Marine Highway is the lifeline of southern coastal communities from Ketchikan to Dutch Harbor. Roads don’t even go to most of the towns served by the “blue canoes.” Cars and RVs are welcome on most ferries. Rent a cabin or sleep in the solarium.

-Cruise the Inside Passage on one of the great deals offered throughout the summer. Prices are so low, it’s hard to say no… unless you’re a solo traveler who’d have to pay a single supplement or just someone hoping to stop over in any of the ports along the way.

– Alaska Airlines flies to the cities you’ve heard of, as well as a few you haven’t heard of. But dozens of small airlines and air taxis cover the state, and it isn’t uncommon to see locals in a bush plane, carrying home some grocery shopping.- Rent a car or RV to drive around the Alaskan interior. This is the easiest way to go, but book ahead as cars become scarce and expensive in the summer. Exercise caution though; there’s a lot of wildlife on the road and many car rental companies have restrictions regarding gravel roads.

-The Alaska Railroad runs over 500 miles of track between Seward and Fairbanks, with an additional spur that goes to the quirky town of Whittier. Seward is the last stop on many cruises and Whittier is an Alaska Marine Highway port.

Hope off a ship and onto a train to go to Anchorage or all the way to Denali National Park and Mt. McKinley. The only other railroad in Alaska is the scenic White Pass & Yukon Railway out of Skagway, popular with cruise passengers and Chilkoot Trail hikers. It is possible to combine the train with a connecting bus to continue on to Whitehorse in Canada’s Yukon Territory.

-There are buses in Alaska, but 75 percent of the state is inaccessible by road. Alaska Trails Parks Highway Express covers much of the 25 percent that IS accessible by road. Plenty of other regional bus lines are based out of Anchorage, Seward, and Homer, and several companies run shuttles from Anchorage to Denali. Additionally, some of the cruise lines offer bus tours.

-Too broke to rent a car but want to get farther out into the bush than the bus or train will allow? Consider cycling or even hitching. GoNOMAD does not recommend hitching but Alaska state laws don’t seem to mind, as long as you are away from major highways and so long as no signs designate the area as a “no hitching” zone.

It’s a way of life for many Alaskans but there are inherent risks in hitching no matter how commonplace it is. Cycling is another option as you can take your bike on the ferry or on some buses. Note that bicycle shops are rare once you leave Anchorage and Fairbanks.

Not as Expensive as you Think

-Alaska isn’t cheap but its costs have been exaggerated. Still, if the bottom line scares you (and your wallet), consider booking a budget tour. Trek America, Green Tortoise, and CampAlaska all offer reasonably priced small-group Alaska tours out of Anchorage.