Alaska: Do it Yourself Saltwater Fishing

Fishing is what brings us to Alaska each year 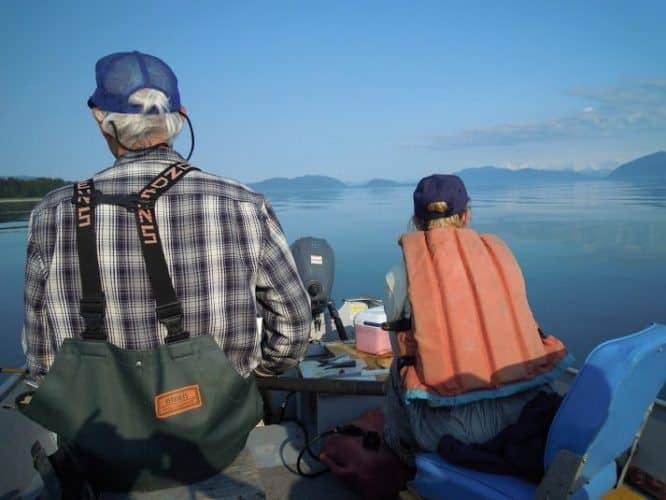 We dropped our lines about 30 minutes from Elfin Cove, where there weren’t any other fisherman.

Skimming over the tops of old-growth forest tall trees on islands in the famed Inside Passage of Alaska, expectations were high for our do-it-yourself guided fishing trip.

Our vintage aircraft is none other than the DeHavilland Beaver (on floats), the longtime workhorse of Alaska’s bush.

With our earplugs in we can only point and smile at each other as one scenic vista after another unfolds on the 35-minute flight from Juneau to South Passage Outfitters. This year we wanted to get away from the Alaska road system and vacation off-grid where you see more whales than people at the fishing spots and are serenaded by sea otters daily.

Fishing is what brings us to Alaska year after year. While we usually go to the Kenai Peninsula and fish for salmon, this year we needed something wilder. With the cost of a guided fishing vacation typically over $5,000 per person, not counting airfare from the lower forty-eight, we opted for a self-guided trip.

If you have some boating experience most self-guided lodges will welcome you. It helps to have saltwater fishing experience in Alaska if you are going unguided but a friend of mine went up without any Alaska experience and chose a self-guided package near Ketchikan and caught all the salmon he wanted.

The benefit of going self-guided is saving lots of money. You also get to go where you want, when you want. The first time we did such a package we caught so many fish that on the fifth day of a seven day trip we opted for sight-seeing instead of fishing. That was the memorable day we saw a bald eagle a quarter-mile from shore doing the breaststroke for all it was worth. It was desperate to reach shore with its catch of live salmon.

The salmon was too big to fly away with so it swam to shore. It was quite a sight as we followed the drenched bird until finally reaching land.

There the exhausted eagle drug its drenched self out of the water to eat the prized fish it had caught.

Going self-guided means you are the ones cutting bait, baiting hooks, landing the fish safely in the boat, and sometimes have to clean and pack your own fish. Landing a halibut over one hundred pounds is quite a feat in an eighteen-foot open boat.

Last year a 482-pound monster halibut was caught near Gustavus, which is just a few miles from where we were fishing.

The largest we caught was around 170 pounds! I was the lucky one to hook and land the big fish but released it as the big ones are almost always females and are needed to keep making little halibut

Near South Passage Outfitters is the town of Elfin Cove. At 30 minutes away we seldom saw any boats from town, and the few boats we saw could be heard from over two miles away in this quiet wilderness. Most of the fishermen opt for salmon at Three Hill Island and other known salmon hot spots on the edge of the open ocean.

We tried to get over there to fish salmon at Three Hill Island but were turned away by dense fog. The two ladies in our group of four didn’t like the 3-5 foot swells in those waters so we stayed in the sheltered area nearby that yielded plenty of halibut for our six-day fishing adventure.

Three other guests that had been coming up to the lodge for 19 years went out every day to the salmon spots motoring an hour or more to find the best fishing. The youngest one of them was 67 and the oldest was 78 which blew us away at their toughness and skill.

Every day they came back with salmon, and tales of throwing back several Coho, Pink and Chum salmon as they only wanted King Salmon for themselves. They gifted us three salmon on the last day we were there after asking if they wouldn’t mind keeping the less favored fish for us.

The cabins and the lodge were perfect for our trip. Our cabins had running water and great views of the bay. The cookhouse was where we hung out for breakfast and dinner. Happy hour was on the deck overlooking the water and a view of Lemesurier Island to the north of us. The first four days were unseasonably warm and we loved having wine and appetizers under warm blue skies.

Meals consisted of locally caught fresh seafood which was fine with us. We had Coonstripe Shrimp, halibut, King Salmon, and Silver Salmon for dinner that couldn’t be beaten. One of the best meals was when Peggy, the cook, took off for a night on the town with girlfriends in Elfin Cove and her husband Dennis made beer-battered halibut for us that was incredible.

I stepped in as the shrimp cook and boiled up a pound or more of Coonstripe Shrimp and we sat down to an Alaskan seafood meal to remember.

Dennis let us borrow his shrimp pots to catch our own, and told us where to go set the pots. We motored out to Idaho Inlet and dropped them baited with salmon scraps in 200 feet deep water.

Two days later we went back in the special boat that had a motorized pulley system to Idaho Inlet to find over four pounds of wiggling delicacies in our shrimp pots to freeze and take home. There aren’t many lodges allowing you to set your own shrimp pots in Alaska on a self-guided package!

The density of wildlife had us thrilled every day. Whether it was the sound of a nearby whale breathing and sending up a spout of mist, or the sea otters quizzically looking at us as they floated by, we loved it. Cute brown-eyed seals would poke their heads out of the water just fifteen to twenty feet from our boat as we fished anchored up in fifty feet of water close to shore.

Baby otters were almost constantly squealing for food and attention in a voice that sounded like a human baby saying, “mom” over and over again. We saw a sea lion haul-out spot where they rest in between fishing trips. There were the big male and his harem lazing away the hours until hunger forced them back to the water to hunt.

The Fairweather Range was visible most days and the big one, Mt Fairweather was magnificent in its snowcapped glory rising 15,325 feet above the Gulf of Alaska. If we had more time to spare we could have paid a little extra for gas and boated over to Gustavus, near Glacier Bay, to do some sight-seeing and fishing. We were dedicated to filling our fish boxes to take home enough halibut for dinner once per week and made do with the scenery within thirty minutes of the lodge.

I’m glad we succeeded in that venture and came back with forty-five pounds of halibut per person. Now every time we have halibut for lunch or dinner we can relive the memory of Alaska’s Inside Passage and our successful fishing vacation. This kind of do-it-yourself vacation isn’t for everyone but if you go I think you will see why so many keep coming back year-after-year to South Passage Outfitters for the best scenery and fishing just about anywhere.

Kurt Jacobson lives in Baltimore, Maryland, and spent many years as a professional chef. Now he travels the world and shares his stories here and on other travel websites.

www.Tasteoftravel2.com
If this story has inspired you to travel, why not check out the prices to get there and make it happen? Search airfares, hotels, and rental cars here. Thanks!