Mummy Dearest: A Visit to the Real Egypt 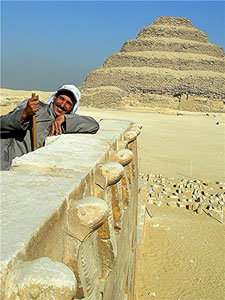 The cobras at Saqarra – photos by
David Rich Mummy Dearest: A Visit to the Real Egypt

A decade after first sampling Egypt’s pyramids, temples, obelisks, and other tourist traps (for ease of collective reference, mummies), I returned curious. Had Egypt changed, and did it offer any attractions outside its well-worn mummies: the Pyramids, Sphinx, Egyptian Museum, obligatory cruise on a Nile hotel boat, ornate temples, and looted tombs? Surprisingly, I found viable alternatives to trodden tourist tracks.

The Egyptian Museum prohibits photos that ten years ago could be freely snapped, memorializing the colorful Tut treasure and hordes more. The museum briefly allowed photos without flash but tourists sneaking flashes required imposition of a no camera policy.

In addition, except for the Tut stuff, the Museum has gone to rack and ruin with dusty, shabby, and forlorn exhibits. Any idea of maintenance seems an alien concept.

Yet tourists flock to the Egyptian Museum as to nowhere else, anxious to see a rainbow of Tut in a rambling building such a shambles it’s a wonder they haven’t somehow misplaced the building itself. Perhaps this is because a new Egyptian Museum is being built beside the Great Pyramid of Giza, due to open in 2009.

A day’s flurry through the usual Pyramids and temples ended with the Sphinx, which suffers a combination KFC/Pizza Hut 100 meters directly in front of its fortunately missing nose, the same as a decade previous.

For relief, I walked around Coptic Cairo, competing for space with European tourists from Catholic countries, and it wasn’t worth the effort. But after a few hours strolling Old Islamic Cairo alongside sidewalk feasts and through atmospheric souks of gold, silks, carpets, spice, and incense, I was happier, spotting few tourists, far friendlier locals, and candid photo opps. 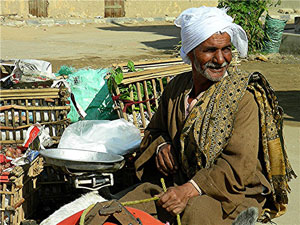 The Oases of the Western Desert

I resolved to break out, escape the Nile corridor, and see what the real Egypt held. So I jumped on a truck with an overland group headed to the Western Desert Oases, and found a country almost untouched by tourists.

Because of the intense security imposed after the 1997 tourist massacres at Luxor and the Egyptian Museum, getting around is a real pain in the keester, often requiring travel in police-escorted caravans.

We had no one to caravan with, but were instead stopped by roadblocks every thirty miles for an inquisition about our nationalities and inordinate delays for the copying of the truck’s license number onto a grubby scrap of paper that would see the light of no other day, finally grinning cheerily as we were at last waved through. 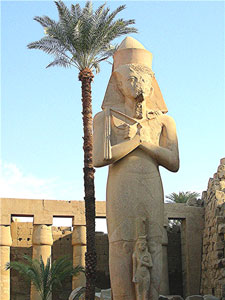 In five days I saw a single other tourist who happened to be staying at the same Bedouin camp. Otherwise, in blissful peace, we sampled the gorgeously muraled tombs of Qarat Qasr Salim at Baharayya Oasis, and sprung for extra blankets to combat chilly desert nights.

The proprietor of the eclectic Badr sculpture and art gallery at Fafafra Oasis confided that his controversial nudes were sparked by a reaction against an uptight culture and religion, a response that seemed mild in the circumstances.

We shared a sheesha water pipe on the sprawling dunes near El Dakhla, quaffed mint tea, and spun travelers lies with Samit, our four-wheel-drive guide. Samit doubled as a bongo drummer, flautist, and purveyor of dry goods as we sprawled smoking on cooling sands dimpled in scallops and pink as the sun chillily yielded to a nearly full moon over the Western Desert.

At Al Bagawat near El Kharza we explored a dozen of the hundred Coptic tombs, 2nd to 7th centuries, modeled in adobe Roman arches, decorated inside with colorful Biblical scenes. But the highlight was The White Desert with miles of eerily sculpted domes, spires, pointy rocks, and silhouettes of unlikely origin. A thrice-wrapped blanket came in handy, for surfing a rosy sunset over shapes forged in active imaginations. 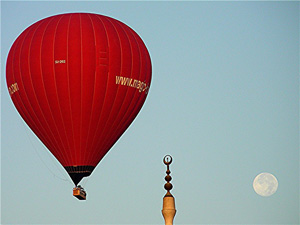 A balloon, a mosque and the moon

The lonesome Western Desert was too soon replaced by the tourist traps of Luxor. Among numerous World Heritage attractions Luxor boasts the largest Egyptian temple, popularized by Johnny Carson in his inimitable role as the Great Karnak.

Karnak Temple has it all, from a reflecting lake for National-Geographic-photo look-a-likes and statues taller than lofty palms to an acre of fatso columns spiked with hieroglyphics and sprinkled with dynamic dead gods and goddesses.

On the sunset side of the Nile, the land of the dead, sits the Valleys of the Kings and Queens. These consist principally of sacked tombs, photography forbidden of these magnificent five thousand year old stone wall carvings and murals in musty ocher, burnt sienna, and blowsy blue. To recall them clearly you’ll have to buy an expensive CD or cheap postcard. 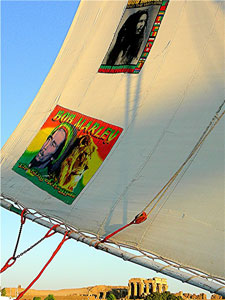 The only site for photography in the Valley of the Queens is the expansive three-level temple erected by Egypt’s only female pharaoh, the redoubtable Hatshepsup. She married her half brother, donned the traditional false beard, adopted the cow as a talisman, and for 22 years from 1472 to 1458 B.C.E. took women’s lib to its logical limits.

Avoid the stodgy Hotel boats crammed with first-world stuffed shirts plying the Nile between Aswan and Luxor. A far more satisfying experience is to sail the Nile on a felucca with its inherent peace and quiet, home-cooked Egyptian meals (salsa-like salads, spicy potatoes, fried chicken, and mint tea), and absence of waiters and tour leaders scrounging tips.

Of course it probably doesn’t hurt if the name of your felucca is Bob Marley, with four wacky hosts faithful to their moniker.

The highlight of tourist Egypt is Abu Simbel, the great seated statues of Ramses II saved by UNESCO from permanent immersion by 250-mile (400 Km) long Lake Nasser formed by the Aswan High Dam in the 1960s.

The downside of Abu Simbel is the caravan-departure time of 4 a.m., requiring an exit from bed at 3 a.m. in order to catch the morning sun on statues facing east, wrung out after a lickety-split drive of three hours.

The next day we put the overland truck on a Lake Nasser Barge and boarded a ferry for Sudan, the epicenter of an eight-hour helter-skelter chaos that finally cast off to deliver us from the unchanging tourism of Egypt and its mummies dearest.

Fly to Cairo from the furthest point in the world for about $1000 roundtrip, if you shop around.

A passable double room in Cairo will cost $30 and way up, while in the tourist cities of Alexandria, Luxor, and Aswan a decent double can be had for $30.

If you explore the western oases, stay at the Bedouin Camp five kilometers north of El Dakhla/Mut, which offers nice doubles for $10.

David Rich has been an international traveler, writer, and photographer for the last 13 years, living in 135 countries to date.

Visit our David Rich Page with links to all his stories

www.gonomad.com
This article was last updated Jan 13, 2019 @ 8:23 am
If we've inspired you to travel with this story, why not check out the prices to get there and make it happen. Search airfares, hotels, and rental cars here. Thanks!