Make the Most of Your Time on Earth

Rough Guides’ new inspirational coffee-table book draws upon the insider knowledge of in-the-know writers to share the 1000 ultimate travel experiences across the globe. Make the Most of Your Time on Earth

is a handpicked curation of personal recommendations, from retracing Odysseus’s footsteps on Mljet and hippo-spotting in the Bijagós Islands, to wild camping on the Arabian Peninsula and defying gravity at China’s Hanging Temple.

It might even be something as simple as walking among Hockney’s landscapes on the Yorkshire Wolds Way or eating among locals in the perfect setting: the definitive gelato in Rome or a mopane worm in Zimbabwe. Each one is special, authentic, and – above all – inspiring.

Excerpt from the book: Meeting the Monkeys of Kibale

Uganda:  It’s unnerving to hear a bass drum being thumped when a) you’re deep in a tropical forest and b) there is no one present to beat it. But exciting things happen in Kibale Forest National Park. And there’s nothing more thrilling than when you find who it is that’s responsible for the noise: wild chimpanzees.

Kibale contains the highest concentration of primates in the world; there are thirteen species in total but it is the chimps that enchant the most. After beating on flying-buttress roots with their feet, they decide on other scare tactics. Unsettling screams echo through the forest canopy – it’s an exhilarating din.

But the acoustics have got nothing on their terrific aerial acrobatics and displays of great ape machismo. And then they’re off, moving through the branches at high speed, and it’s impossible to keep up.

Coming face to face with the Big Five in the wild 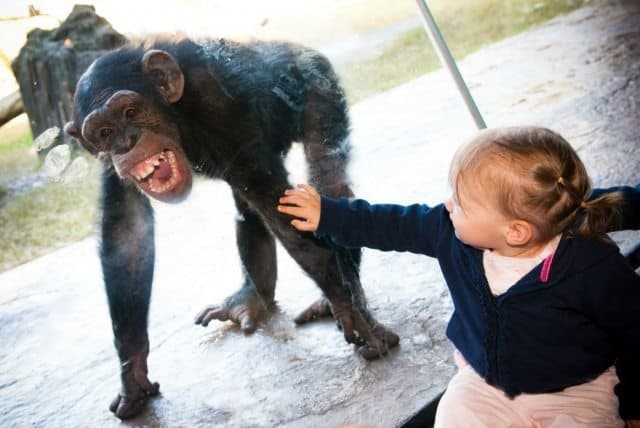 Kenya: Coming under the mighty Big Five umbrella, Africa’s elephants, rhinos, buffaloes, lions, and leopards are the wild animals that every debut safari-goer wants to see. Importantly, the presence of these charismatic species indicates a healthy ecosystem. Each one is extraordinary, and you’ll never forget your first glimpse.

Floundering over where to go on your first Big Five safari? The conservancies adjoining the Maasai Mara, Kenya’s most famous wildlife destination, are a superb choice. This may not be the easiest place to see all five – Mara’s rhino population is small and elusive – but for the winning combination of atmosphere, romance and a forward-thinking, community-friendly ethos, it’s impossible to beat.

Rwanda: A face-to-face encounter with a mountain gorilla in Rwanda’s Volcanoes National Park is one of the most exciting wildlife experiences Africa has to offer. And locating the apes in their tangled and misty forest home is part of the thrill, an intense, high-altitude slog that has you navigating steep, muddy slopes for between one and five hours.

A guided trek high into the Virunga Volcanoes, which support more than half the world’s remaining one thousand mountain gorillas, begins with a chilly dawn start at the park headquarters in Kinigi. A close-up encounter is practically guaranteed, but be warned – it can get tough, the air thinning and the anticipation building with every strenuous, slippery, step.

Any exhaustion dissipates immediately, however, when you look into the liquid brown eyes of one of the magnificent bamboo-munching beasts, whose formidable bulk (up to 200kg) is complemented by a remarkably peaceable temperament – these are the archetypal “gentle giants”.

Living it up on the Amalfi Coast

ITALY The Amalfi Coast, playground of the rich and famous, exudes Italian chic. The landscape is breathtakingly dramatic: sheer, craggy cliffs plunge down to meet the shimmering blue water and tiny secluded coves dot the coastline, accessible only by very expensive yacht. Setting off down the coastal road, you can’t help but fancy yourself a bit of a jet-setter.

The drive itself deserves celebrity status; you may think you’ve seen corniche roads, but this one’s in a class of its own, hewn into the sides of the mountain and barely wide enough for two large cars to pass comfortably, let alone the gargantuan buses that whizz between the main towns.

On one side rises an impenetrable wall of the mountain, on the other, there’s nothing but a sheer drop to the sea. Overcome the instinct to hide your head in your hands and embrace the exhilaration – this is not a ride to miss. The road snakes its way along Europe’s moneyed edge, plunging headlong into the dark, roughly hewn tunnels, curving sharply around headlands and traversing the odd crevice on the way. Every hair-raising bend presents you with yet another sweeping vista.

Don’t get so caught up in the drive that you forget to stop and enjoy the calm beauty of the effortlessly exclusive coastal towns.

Explore the posh cliffside town of Positano or stroll the peaceful promenades and piazzas of elegant hilltop Ravello.

And in more down-to-earth Amalfi, just below, readjust to the languorous pace of resort-town life at a café before heading off to enjoy the town’s sandy beach. Presided over by a towering cathedral adorned with glittering gold tiles and a lush and peaceful cloister, it’s the perfect antidote to the adrenaline rush of the coast road.

SLOVENIA It’s said that every Slovene has to climb Mount Triglav, the country’s highest (2864m) and most exalted peak, at least once in their lifetime. They’re joined by hikers and climbers from many nations, who arrive in droves as soon as summer comes.

The mountain’s nickname, Old Mr. Three Heads (Triglav means “Three Heads”), originated with the early Slavs, who believed that it accommodated a three-headed deity who watched over the Earth, sky, and underworld.

The most difficult approach is via the north face, a stark 1200m- high rock wall that’s certainly not for the faint-hearted. Most hikers opt for the route from Lake Bohinj further south; watched over by steeply pitched mountain faces, this brooding body of water is the perfect place to relax before embarking on the mountain trail ahead.

Starting at the lake’s western shore, you pass the spectacular Savica Waterfall, before a stiff climb over the formidable Komarča cliff, and then a more welcome ramble through meadows and pastureland.

Beyond here lies the highlight of the route: rich in alpine and karstic flora, the Valley of the Seven Lakes is a series of beautiful tarns surrounded by majestic limestone cliffs. The views are glorious, though by this stage most hikers are hankering after the simple comforts of a mountain hut.

Not only is Triglav a tough nut to crack in one day, but these convivial refuges are great places to catch up with fellow hikers as well as refuel with steaming goulash and a mug of sweet lemon-infused tea.

Most people push on at the crack of dawn, eager to tackle the toughest part of the ascent, entailing tricky scrambles before the triple-crested peak of Triglav looms into view.

Once completed, according to tradition, there’s just one final act for first-timers, namely to be “birched” – soundly thrashed across the buttocks with a branch.

CROATIA Even the most committed of culinary explorers often find the truffle an acquired taste. Part nut, part mushroom, part sweaty sock, the subtle but insistent flavor of this subterranean fungus inspires something approaching gastronomic hysteria among its army of admirers.

Nowhere is truffle worship more fervent than in the Croatian province of Istria, a beautiful region where medieval hill towns sit above bottle-green forests. Summer is the season for the delicately flavored white truffle, but it’s the more pungent autumnal black truffle that will really bring out the gourmet in you. A few shavings of the stuff delicately sprinkled over pasta has an overpowering, lingering effect on your tastebuds.

The fungus-hunting season is marked by a plethora of animated rural festivals. The biggest of the lot is held in the normally sleepy town of Buzet, where virtually everyone who is anyone in Istria gathers on a mid-September weekend to celebrate the Buzetska Subotina, or “Buzet Saturday”.

As evening approaches, thousands of locals queue for a slice of the world’s biggest truffle omelet, fried up in a mind-bogglingly large pan on the main square. With the evening rounded out with folk dancing, fireworks, alfresco pop concerts and large quantities of biska – the local mistletoe-flavored brandy – this is one small-town knees-up that no one forgets in a hurry.

Buzet’s reputation as Istria’s truffle capital has made this otherwise bland provincial town a magnet for in-the-know foodie travelers. The revered fungus plays a starring role in the dishes at Toklarija, a converted oil-pressing shed in the nearby hilltop settlement of Sovinjsko Polje, whose head chef changes the menu nightly in accordance with what’s fresh in the village.

One of the best meals you’re likely to eat is in the neighboring hamlet of Vrh, where the family-run Vrh Inn serves fat rolls of home-made pasta stuffed with truffles, mushrooms, asparagus, and other locally gathered goodies. With the ubiquitous mistletoe brandy also on the menu, a warm glow of satisfaction is guaranteed.

Buckle up for a vintage tour of eastern Sicily

ITALY Here’s an offer you can’t refuse. Hire a vintage Fiat 500, or Cinquecento as the Italians call it, for a storied east coast road trip from Catania, taking in baroque history, celebrity couture, and mafia movie history. How could you say no?

First buzz south to Ragusa, a magnificent cluster of honey-colored cathedrals, crumbling ramparts and sun-dappled courtyards, reached by driving along the belly of a deep, rocky ravine. It is one of a trilogy of baroque hilltop towns (the others include nearby Noto and Modica), and each has an arsenal of sights to surprise even the most ardent of travelers.

Your Fiat 500 is also that snazziest of Italian inventions – the cabriolet – so unbuckling the leather sunroof, you make do with nature’s air conditioning for the drive north. It is a slow but rewarding drive: the skies powder blue, the sunburnt fields of orange and lemon trees vast, and the smoking crest of Mount Etna, Europe’s highest active volcano, in the rear-view mirror.

Next stop: Taormina, the sort of impossible town you can only find in Italy. It clings to the side of a steep rock-face, with some of the houses looking as if they’re about to cascade into the aquamarine waters below. But that’s just part of its appeal: it has everything you could want from storybook Italy – a medieval layout, a Greek theatre, windswept beach villas, and views of the Ionian Sea.

Over the years, many famous faces have found solace in its narrow streets – Truman Capote, Oscar Wilde and Greta Garbo among them – but no one has become more associated with the town than fashion designer Domenico Dolce. He regularly returns each summer to film splashy campaigns for Dolce & Gabbana’s latest collections.

These days, while Taormina is a hub of designer-label boutiques, Savoca and Forza d’Agrò to the north remain blissfully sleepy. Nearly 50 years have passed since Francis Ford Coppola and the production crew of The Godfather arrived in 1971, but the hilltop refuges don’t look like they have changed one bit. And that’s just the way the Sicilians like it.