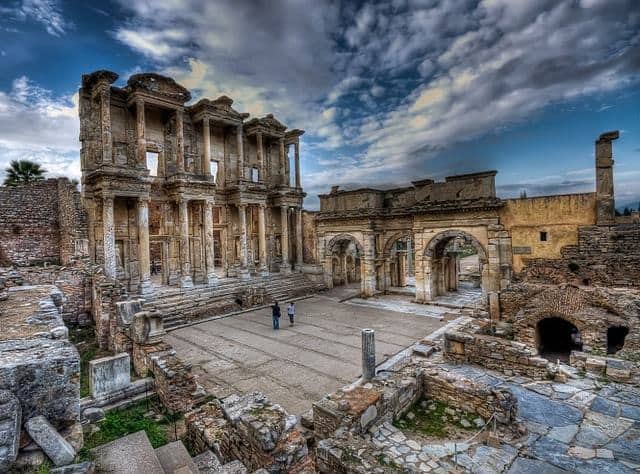 Ephesus & Gokova, Two of the Most Fantastic Places in Turkey

It was a hot day and we took a lot of breaks in the shade as we walked through the Roman ruins at Ephesus. My husband and I waded through the throng of tourists gawking at the century old ruins. Tour guides in French, Russian and Japanese herded their flocks from the old baths to what remains of Harbor Street.

One of the most impressive sites at Ephesus is the Great Theatre, which sits on the eastern end of Harbor Street.

In the bright afternoon sun, we sat at the top of the stairs, taking a break from the heat. Sipping from our bottles of water, we watched as tourists came and went and pondered the enormity of historical artifacts at their feet.

As a group of German tourists left the theatre, one of the women broke away and walked towards the center of the stage. With one hand on her heart and the other outstretched towards the sky, she began singing opera. With the gusto of a woman not afraid, her notes sailed through space and time.

Visitors stopped climbing the stairs. Tour guides stopped talking. Captivated by her voice, her audience watched the impromptu show on a stage where performers have been giving shows for over two centuries. When the German woman finished, she gave a little bow, embarrassed, and ran to catch up with her group. And the crowed applauded.

While my friends and family would quickly tell you that my singing voice is not one to be shared in public, even I was almost inspired enough by Ephesus to get up and sing.

Entrance to Ephesus costs $10 and is open year round. Tour guides are available at the entrance, or you can buy a self-guided book (many hotels in Selcuk, which is only several kilometers from the ruins and a great place to stay, will lend you an Ephesus guide book for the day.)

Almost all hotels in the area will provide a free shuttle to the ruins, or you can make the several kilometers walk along a nicely shaded tree lined street. Make sure you bring plenty of water or juice with you, as prices at the stands outside the ruins rival those of vendors at a New York Yankees game.

Budget at least a half day to explore the ruins. We began on Harbor Street, where the heart of the old city once lay. Before the decreases in the water level, this street, as its name would suggest, lined the harbor.

Wind your way through the Great Theatre, Sacred Way, and to the Library of Celsus, one of the most striking remains at Ephesus. From the library, make your way up Curetes Way, where you’ll find the terraced houses and the communal men’s toilets. When you reach Upper Ephesus, explore the Gate of Hercules and the small theatre, which was used for town council meetings.

Selcuk is about a day’s ride from Istanbul via bus and only several kilometers from the ruins at Ephesus. Most tour operators in Istanbul can sell you a ticket on the night buses, which usually leave around 8:00 pm.

Just hop into any of the offices located in Sultanhamet or near Taskim Square. If you’d prefer to spend your night in a bed, rather than on a bus, tickets are available on EFES Tour (ticket office 36 at Istanbul bus station) and buses leave at 10:30 in the morning. Although you do “lose” a day in transit, the country side is stunning and you’ll even get a free ferry ride across the Sea of Marmara.

The bus system in Turkey is nothing short of fantastic, and generally you can show up at the bus station (otogar) and within a few minutes have a ticket for a bus that is leaving within an hour. Some of the major bus companies:

Also, check with tour agencies for specials on flights to Izmir. Cheap flights can often be found (it is less expensive to book domestic flights from Turkey rather than from your home country, so wait until you arrive) and mini bus services will take you the rest of the way to Selcuk (about an hour).

In addition to being home of St. John’s Basilica, a Byzantine Aqueduct, the Temple of Artemis (one of the Seven Wonders of the Ancient World) and the Ephesus Museum, Selcuk is only several kilometers from Ephesus.

There are several nice hotels in Selcuk. Hotel Akay has modest rooms that run for 40 Euro a night. One of the best draws of this establishment is its fantastic rooftop terrace, where you can see St. John’s Basilica and enjoy a drink and dinner at the end of the day. Also, take a dip in their lovely swimming pool after getting dirty trekking through the ruins.

There are several other towns that serve as a good base for visiting Ephesus, including Sirince, a small village 9km east of Selcuk and Kusadasi, a resort town on the Aegean Sea. Find unique Ephesus hotels and interesting tours in Ephesus. For more information on hotels in Selcuk, Sirince and Kusadasi, visit the Turkey Travel Planner’s discussion boards on hotels in the Ephesus region at turkeytravelplanner.com.

The Bay of Gokova

After 10 days of art, history and ruins (a week in Istanbul and 3 days in Selcuk/Ephesus) I was ready to take my vacation to the next level: complete and total relaxation. For this, we hopped on a bus and took off for the beach.

When my father visited Turkey in the early 1990’s he spent a week on a gullet, exploring the fishing villages that line the south of Turkey along the Mediterranean. When I told him my plans for visiting Turkey this year, his one piece of advice was, “Don’t miss the Med.”

There is no dearth of resort towns along the Mediterranean and Aegean: Bodrum, Marmaris, Fethiye, and Antalya all cater to the needs of tourists looking for a little sun and sand. But if you are more inclined to spend some time in a small village where fishing still remains a staple of the local economy and the water is so pristine you can see fish swimming along the bottom of the sea, head to Akyaka which sits at the tip of the Bay of Gokova.

Jagged mountains shoot out from behind the small village of Akyaka. The juxtaposition of mountains and sea is breathtaking and as we drove down the switch back road into the village, the turquoise water of the bay slowly came into view. With white pebble beaches, quaint wooden roof houses and thick forests, the lack of development in Akyaka is both amazing and refreshing.

This is the kind of town where you don’t feel bad for not doing anything. We spent our first several days taking leisurely walks on the beach, reading by the pool, and feasting on the daily catch. It seemed that a cool breeze always came in from the ocean, so even on the hottest of days, the temperature remained pleasant.

If you are feeling a little more adventurous, put on your hiking boots and head out along the dirt path that follows the northern shore of the bay. You can find your own private cove for a dip along the way. Water sports are also very popular on the bay. At the Yucelen Hotel you can rent kayaks and explore the bay and the Azmak River that winds through the marshy lands to the east of the village. Wind surfing is also very popular.

After taking in the sites at Ephesus, grab a bus at the Selcuk station toward Marmaris. They leave every half hour and tickets cost about $13 each. Except, instead of going all the way, get off about a half hour before Marmaris at Akyaka. (The buses and locals seem to interchange Akyaka and Gokova when referring to this village, so you can use either or both when asking for a ticket). Travel time is about three and a half hours.

You can either take a minibus from the bus station into the town, or hire a taxi. There isn’t a ton of traffic into the village, so you may have to wait awhile, but trust me, the wait is worthwhile.

Gokova is also accessible by air or sea. If you are not coming from Ephesus, you can fly into Dalaman airport, which is about an hour from Gokova, and then travel by minibus or hire a taxi. Alternatively, you can hire a yacht or gullet and arrive by sea from any of the other resort towns along the coast.

There are several hotels that line the beach. The Yucelen Hotel is by far the most upscale and doubles run about $80/night. Half board is available for an extra $20/night, although you might be better off trying out some of the restaurants around town.

Erdem Hotel is a nice lower budget option and sits right next to the Yucelen. Rooms run between 16 and 28 Euros, depending on the season. Erdem also offers apartment style accommodations for 50 to 70 Euros. Email info@turkuaz-guide.net for more information.

In addition to the several hotels and pansiyons in Akyaka, you can also rent a villa in the mountains overlooking the bay. To learn more about rentals in the area, contact Roof Real Estate at:
myvillarenters.com.

The Kosem Restaurant is located in the center of town and offers cheap, good fare. Their doner kebabs are excellent and you’ll find incredibly friendly service.

From the beach, take a walk along the river to get a view of some of the exotic species of birds that call Akyaka home. There are two upscale fish restaurants situated on the riverside where you can spend the afternoon indulging your taste buds.

You can also self cater in Akyaka’s orman piknik yeri (forest picnic area) just beyond the north side of the village. Take some bread, cheese and Turkish wine and settle in for a beautiful Mediterranean sunset. Several kiosks in the park sell snacks and drinks as well.

There aren’t many stores in Gokova, but the Akyaka Carpet Center (243-54-65) is located in the center of town and has a decent selection of Turkish rugs.

Taking the bus to Marmaris is quite simple and can make for a nice day trip from Gokova. Travel time is about 40 minutes. While in Marmaris you can take in the covered bazaar and dine in one of its many restaurants. The tourist-centered atmosphere is quite a contrast to laid-back Gokova, but if you’re in the mood for a wild night out, this is the place.

You can also rent a boat and visit Cleopatra Island, where legend has it that Cleopatra had the white sand shipped in from the Red Sea. While reality may not be as fantastic, the beaches certainly live up to the tales of beauty.

For general Turkey travel tips, visit Tom Brosnahan’s Turkey Travel Planner online at turkeytravelplanner.com. The website is a great resource for learning more about hotels, tours, restaurants, and there are several suggested travel itineraries.
If you can’t find answers to your questions, post your own question on the site’s discussion boards and either Tom or other Turkey enthusiasts will post their replies.

Jessica P. Haydenis a freelance writer who covers a range of issues including travel, politics, foreign affairs and law. Her work has appeared in Slate, Transitions Abroad, TravelMag, and numerous other publications. She also contributed to a book on investing for teens published by the Motley Fool. Visit her website at www.jesshayden.com.