Mauritius: A Jewel of Africa’s Coast 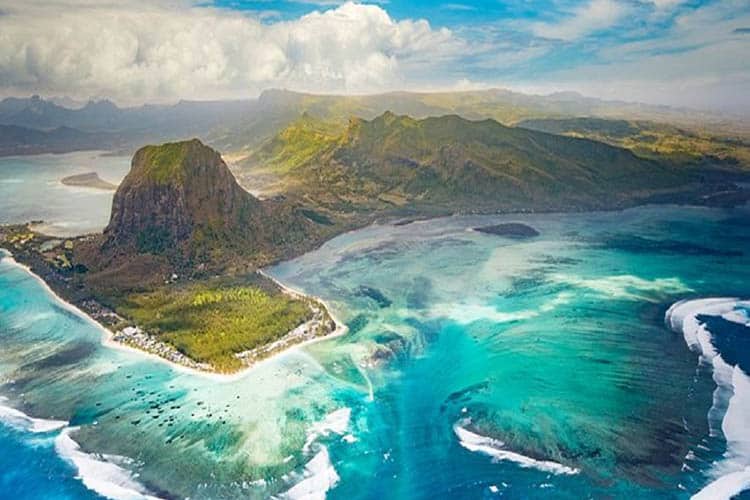 Mauritius is a beautiful sun kissed island that is just 1,865 km in size. It is located 2000 km off the Southern coast of Africa and has its origins in as the result of a volcano. The people are of a mix between Europeans, Indian and African and are known as indo Mauritians. English is the language of the the country though a type of broken French known as patios is used in rural areas. The capital city is Port Louis and is an actual shipping Port. The religion is predominantly Hindu.

July/August when the temperature is 24-26 C. December to March is the hottest time of the year with temperatures at 30 C (89F).

Getting There and Around

The main airport is Sir Sewoosagar Ramgoolam International Airport. It is serviced by the national airline Air Mauritius. There is an efficient bus service that operates from early in the morning to 8pm. The buses are not in good condition but will get you where you want to go.

Taxis are recognizable by their white registration plate and can be hired from the front desk of the hotel. None of the taxis have meterins for the fare, so be sure you agree upon a fare before entering the taxi so there are no surprises on your exit. Taxis are recommended as your mode of transport as they are air-conditioned and are mostly in good shape.

Pamplemousse Gardens, which loosely translated means grapefruit garden. Pamplemousse is about 20 minutes from Grand Baie by regular bus and is well worth visiting for fans of natural beauty. There are many species of exotic plants such as the Talipot Palm, which flowers once every sixty years and then dies. You can also see the giant lilies on the pond in the gardens, which change color from red to white every time they re-open.

This is really a fascinating sight to see–imagine a giant lily that is red on one day and completely changes to white the following day that it opens. There are even real life chewing gum trees and if you are like me and have only ever seen packaged gum in a stick this proved to be a real treat.

In January/February Mauritius celebrates an annual festival known as”Cavadee.’ It is a public holiday and comes from a Tamil tradition where fire walking and sword-climbing are the events of the day. Participants pierce their bodies with needles and their tongues and cheeks with skewers. They then hold the “Cavadee”, which is a wooden arch covered with flowers with a pot of milk at each end of its base, and place it before the deity in the temple.

The best tour of Mauritius is definitely the underwater, air-conditioned submarine, which takes you deep under the Indian Ocean. The tour last 40 minutes and takes you through a breath taking crystal clear, adventure. Not only do you see the coral reef at close range and swim alongside the schools of multicolored tropical fish, you get to see a real shipwreck.

The submarine is very comfortable and although the trip is somewhat expensive at the price of $USD140, it’s one of those once in a lifetime opportunities.
Blue Safari Submarine, Royal Road, Grand Bay Tel: (230) 263 3333

Food on the island is of a blended culinary experience mixing French, Creole, Indian and Chinese. You can get a taste of their culinary expertise at a great little restaurant with reasonable prices in the heart of Port Louis called Carripoule. Their speciality is seafood and they prepare a local dish known Prawn Kadai, which is prawns and bell peppers cooked in spices. The Mauritian Vindaye of fish is deep-fried fish coated with turmeric, mustard seeds, ginger and chillies both I highly recommend as a local dish.
Carripoule, Place Bisoondoyal, Port Louis
Tel: 230 212 1295

Other Important Things about Mauritius

*Drive on the left hand side
*Visas are not required from visitors from EEC or USA
*High health standards, hospitals offer free services, private clinics may not.
*Mauritious is a malaria free area.
*Departure tax is 300 Mauritian rupees ($12.50) per person payable in cash at the airport

*Visitors are advised to drink boiled or bottled water.
*The power supply is 230 volts and uses the British three pin plug
*Currency: They use the Mauritian rupee. At this time USD 1 = 24.0 rupees (FRF1 = 3.8 Rupees).
*Be sure you take mosquito repellent and sun block.
*Be aware that pickpockets do operate in the city of Port Louis
*The international dialing code from Mauritius is 00, the country code and then the actual number.
*Mauritius has its own brand of coffee that is grown on the island itself known as Coffee Chamaral.