Sierra Leone, one of the poorest countries in the world is climbing up the destination bucket list.

Sierra Leone is listed as the eighth poorest country in the world, and it’s probably one of the last places on your travel bucket list.

But our editor at GoNomad, Max Hartshorne, met with members from Kamageo, a national tourist board for African tourism, about why Sierra Leone is one of the up and coming new travel destinations.

With a population of around seven and a half million people and a GDP of $11.53 billion, Sierra Leone is one of the poorest countries in the world.

Yet, it’s topping the list as one of the fastest-growing travel destinations, even above countries like Iceland, Japan, and Chile. Admittedly, it’s a long way nothing but up, but the nascent efforts could transform this hard-luck nation.

Sierra Leone was once devastated by war and the famous Ebola outbreak (which was completely cleared in 2015). This country is now a hopeful nation, filled with filled cities, beautiful beaches, and an amazing sense of culture.

The population of Sierra Leone is hoping that this spike in tourism could really help to boost their country’s prosperity. There are so many reasons to add Sierra Leone to your travel bucket list.

The country’s beautiful, lighthearted capital, Freetown is bursting with colorful architecture and picturesque landscape. With a congruous blend of mountains, sea, and city, it’ll leave you wondering why you haven’t visited sooner.

Surrounding Freetown is plenty of outdoor adventure that shouldn’t be missed including beaches and hiking trails.

One of the best-kept secrets of West Africa is the breathtaking beaches of Sierra Leone. The shimmering sunlight makes the sand sparkle below your feet as the waves from the ocean crash against the shore.

Surrounding these beaches are the intricate rainforests to explore. Many say that on a clear day, the contrast of the beach and rainforest is a reflection of the country’s flag.

Many of the best beaches require some off-roading to access, but even the most populated beaches on the Freetown peninsula are barely-touched. Some of these amazing beaches include Tokeh, Aberdeen, Banana Islands, and Bureh Town.

One popular beach, in particular, is River Number 2 (yes, that really is its name). Right along the Freetown Peninsula, River Number 2 is the perfect place to kick back and relax.

While you’re there, a local guide can take you on a boat ride up the river where you might find yourself lucky enough to see crocodiles and monkeys.

Take a visit through the Outamba-Kilimi National park where savannah and jungle merge together.

Try taking the Sierra Leone Animal Tour which takes you through a Rainforest Chimpanzee Sanctuary for only six euros.

Or you can spend your day at Tacugama Chimpanzee Sanctuary, another incredible area to see these mammals. Tacagama is home to 80 rescued chimps, while the country as a whole has a population of 5,500.

Gola Rainforest, one of Sierra Leone’s most extravagant nature expeditions, is home to over 300 different birds, along with elephants, chimps and numerous duiker species.

A great day excursion for those visiting Sierra Leone is the Golden Ride Rentals, a five-hour safari through the country. Visitors can choose between quad bikes, buggies, or Enduro bikes to ride through the area.

Starting the route near the Coral Bay beach, this tour brings you past the shipwrecks, sea caves, and banana plantations all before heading into Akama Nature Reserve.

Also enjoy Lara Beach, where the tour takes a quick stop to swim through the blue waters. For around $115 dollars, Golden Ride Rentals will make sure you never want to leave Sierra Leone!

Outamba Kilimi NP gives visitors the chance to cruise the river in search of “full-size” hippos and other aquatic life.

Sierra Leone’s highest peak is situated in a beautiful reserve inside the Loma Mountains Forest Reserve.

This amazing place is perfect for hiking and enjoying the company wild animals. The hike to the top of Mount Bintunami is tough, make sure you have enough energy and time. For more advice, make sure to find a guide that can help you navigate your adventure.

Composed of eight islands, the Turtle Islands are absolutely stunning with miles of white sand, shallow waters, and coconut trees.

These islands are only accessible by boat, but don’t fear: there’s plenty of places to stay and/or camp on the islands.

Turtle Islands Expeditions offers a day trip that focuses on the safety and comfort of an excursion to such a remote area. This excursion also includes recreational activities such as fishing, swimming, snorkeling, and more.

Bunce Island is the site of the largest British slave castle on the Rice Coast of West Africa. The island is now a national historic site, and it truly is a great place to explore. You can visit the old slave prison, dormitories, factory houses, and watchtowers. 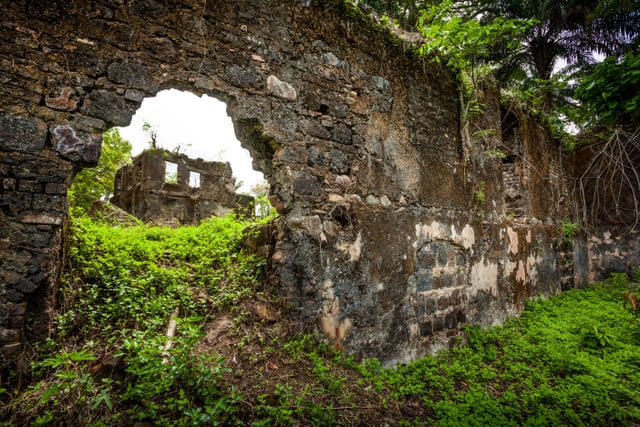 The remains on Bunce Island are chilling to see, but they provide an important introduction to the history of the slave trade.

In the center of Freetown, the Cotton Tree stands as one of Sierra Leon’s most symbolic sites. The famous tree is estimated to be over 200 years old.

It was once said that the tree offered shade to the newly freed slaves. While yes, it’s just a tree, visitors should definitely stop by and take a look at it. Its cultural significance is important as it stands strong in the middle of the city.

Another symbolic site in Freetown is the King’s Gate, a large stone structure inscribed with the statement “Any slave who passes through this gate is declared a free man.”

It is said that as soon as former slaves passed through the gate, they became free people.

Sierra Leone’s food is a perfect reflection of its history; flavors of Africa, the West Indies, and the Americas all come together to create the perfect palette.

Smoked fish, stews, peanuts, and banana leaves are just some of the tastiest plates. No meal comes without a big helping of rice in Sierra Leone, we were told.

Sierra Leone is also known for using red palm oil in many of their dishes, which creates a red hue to the food that’s prepared in it.

Sierra Leone is very hot and humid throughout the year, but the coastal areas stay relatively cool. The rainy season gets to be very wet, however, so we recommend planning your visit between November and April when it will be hot and dry.

Can you name some exciting excursions visitors can participate in?

Tiwai Island, ‘Big Island’ in the Mende language, the inland Island certainly packs a punch when it comes to primate population.

Set on the Moa River, the entire island is run as a conservation project. There are over 700 different plant species, and 11 kinds of primates, including Diana monkeys and chimpanzees.

Tiwai also homes 135 bird species plus otters, sea turtles and, of course, the endangered, elusive pygmy hippos. Visitors can stay at a small campsite while exploring this place.

Or for a more cultural experience, a visit to Bunce Island would be in order. Located close to Freetown, this tiny strip of land in the Sierra Leone River served as a major port for the slave trade in the 18th century.

Unlike other slaving trading posts, nothing was ever built on the island after its abandonment in the mid-1800s. Its crumbling ruins, partly overgrown by weeds and roots, remain relatively untouched to this day, serving as a reminder of the island’s dark past.

Can you discuss the contrast between Sierra Leone five or ten years ago and now?

Unfortunately, Sierra Leone is better known for civil war and blood diamonds due to that being a very real reality in the recent past.

Sierra Leone was plagued by war, slavery, and disease, and only now is the country starting to recover. However, the people of Sierra Leone are very resilient and meeting these amazing people is a delight all of its own.

Due to the low visitor numbers passing through, locals are far more curious rather than weary of tourists, with an eagerness to share their world with potential new friends.

What will this new increase in tourists do for Sierra Leone?

Many African countries have a huge focus on conservation, and Sierra Leone is no different.

Taking part in excursions to places like Tiwai Island or Tacugama Chimpanzee Sanctuary have a significant positive impact on the surrounding communities, as entrance fees, permits, and excursion fees all go directly back into the area to help fund conservation projects and community improvement.

Should travelers be nervous to explore Sierra Leone? How can they be guaranteed a safe and exciting experience?

While Sierra Leone has a troublesome past, Sierra Leone is currently very safe. As with all countries, there are areas that are safer than others, but as long as you stay within the main areas, and listen to your guide, there is nothing to worry about!