Guernsey: The Little Bailiwick with So Much to See

I was in London on business. Where could I go for a four-night extension, a place that’s easy to reach, worth visiting, and would not take long to get to?

My decision was easy–a quick 45-minute flight from London Gatwick, and I was in Guernsey, which is a self-governing British Crown dependency.

That’s like Bermuda, Canada, and Gibraltar: they run their own country, but are part of the nation of the crown.

Taken together with the separate jurisdictions of Herm, Alderney, and Sark, two even smaller nearby islands, it forms the Bailiwick of Guernsey. 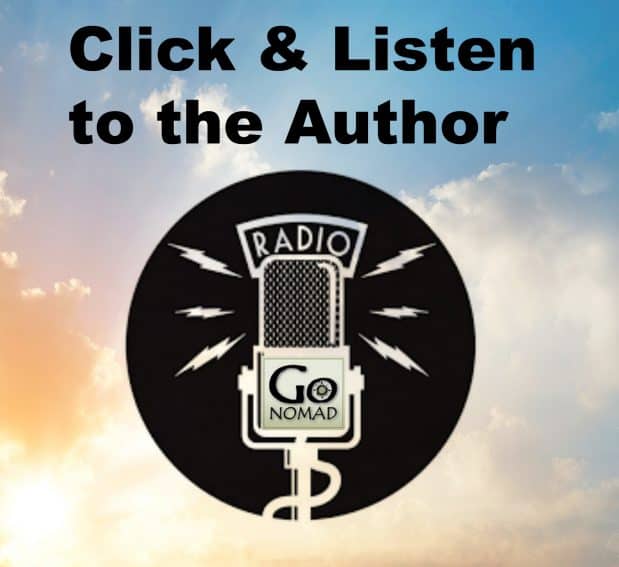 What does that mean for visitors?

Well, everyone here talks like they’re from good old England.  They like tea, Marmite, and dogs. There are walking paths that circumnavigate the small island, that’s only about five miles long.

A Big Role in WWII

And because of its location, about 15 miles off the coast of France, Guernsey had an outsized role to play during World War II, when the Nazis occupied the island and left dozens of gun emplacements, bunkers and secret war rooms that today are a big part of the tourist route.

These days, the thing most people know about Guernsey is the wildly popular book and movie, The Guernsey Literary and Potato Peel Pie Society

written about the dark days of the occupation.

It’s hard not to be reminded of this book and movie no matter who you talk to in Guernsey. It’s Kind Of a Big Deal Here, I was told, with ten million copies sold and the movie still available to enjoy on Netflix.  The story about life under the strict German occupation is compelling, and you can visit many of the places mentioned in the book by following the guide provided by the local tourism board.

On my first night on the island, we settled into La Fregate Hotel, perched on a hill overlooking St Peter Port, Guernsey’s big main harbor.

With the twinkling lights of the Castle Cornet to the right and the ferries docked in their berths for the night, the port was a pretty sight from my second-floor room.

Another thing that’s becoming a big deal on Guernsey are specialty drinks, like gin, cider and vodka distilled right on the island. The owner of Bella Luce Hotel, Luke Wheadon, is the maker of Wheadon’s Gin which we sampled with one of the hotel’s managers, Bruce Marques.

Marques is quite enthusiastic about gin, and his taste test compared the distinct flavors of various gins, including Pink Pepper, Tanqueray Ten, and the house favorite, Wheadons.

Even though I’m not a gin drinker and hadn’t relished the thought of downing so much strong liquor, the gins subtle flavors and the fascinating botanicals used such as rock samphire (an ocean weed) and lemongrass added much pizazz to the mixture.

One man whose family can be tracked by viewing the portraits in his grand living room is Peter de Sausmarez, who lives in a grand manor house and has a keen memory about the German occupation and his family’s illustrious history.  One great-granddad sailed a ship all around the world, and others were famous noblemen and privateers.

The Manor has a brassworks where you can watch the famous Guernsey pots being made and a pond where visitors sail toy boats, and feed ducks.  The guided Manor Tours are packed with interesting stories about the family and the house, going back a millennium.

Like the craft beer movement, boutique gins are becoming more and more popular in Guernsey. In fact a few days after I tasted Luke Wheadon’s gin, I met a man at Rocquette Cider about three miles away who showed off another German-made still that he said he would use for gin and vodka production starting soon.

One of the interesting aspects of Guernsey is how small it is, yet there are many open areas and farmland that belies the fact that it’s only 25 square miles.

With just about 64,000 residents, most people here seem to know each other, and many of the people we met have lived in Guernsey all of their lives. Parking is tough, and the cars bear the scratch marks from driving the narrow streets.

More than a few people told us happy stories of their children leaving the island for college and then returning to raise their families, much to the delight of their parents.  It’s a magical island that people leave, and then, well, want to return to.

The driving economic force in the States of Guernsey are financial institutions like banking trusts.  The history of Guernsey is one of continually being caught by economic factors that have caused devastating losses.

For instance, after World War II, local farmers began planting tomatoes for export. The business got better and better and hundreds of greenhouses were built to keep up the supply.

This all went downhill when the Netherlands and other EU countries began to grow their own tomatoes using subsidies, which put the Guernsey tomatoes out of reach to consumers. The business died in the 1970s and all that is left are hundreds of empty greenhouses.

Today very few tomatoes are grown here, and the island has given up agricultural imports and figured out how to attract trust companies with tax incentives, given that they’re not a part of the United Kingdom, with their own arcane and hard to understand set of laws, that go back to Norman times.

Today many of the most successful people on Guernsey are working for the financial institutions that line the streets of St Peter Port, companies like Northern Trust and others, and tourism makes up the other important part of the local economy.

The first place many visitors go to get a sense of where things are on the island is the Fort George’s area,  which was once a fortified military area and now is the most desirable neighborhood, high on a hill overlooking the busy port.

There is a cemetery there with 114 graves of German soldiers that dates back to World War II. It’s hard to avoid talking about the occupation of Guernsey because the Nazi occupiers put so much work into their fortifications, which in hindsight were way, way more than what was needed.

Dozens of bunkers with six-feet-thick cement walls were built along the beaches, and the Germans even built a railroad to move their guns and put in an 80 mm gun that was taken from a battleship and placed in a field to defend it against the Allies.

Slave labor in the form of prisoners of war made it all even more despicable, but today German tourists enjoy coming to tour the Naval signals Headquarters at St Jacques-Guernsey. How times have changed!  (To learn more about the German occupation of Guernsey, read the famous book or watch the movie on Netflix).

The neighboring islands of Herm, Sark, and Alderney are also worth visiting. But during the cold months, (we visited in November) the ferries are often canceled and my visit to Sark didn’t happen.

Many Guernseyites we met raved about how nice a visit to Sark can be, very relaxing beaches and not that much going on. It’s a 45-minute ferry each way, in case the weather cooperates.

I have always known Guernsey for the light brown cows that bear that name.  There are still some of these gentle giants grazing the island grass, and most restaurants feature their locally produced Guernsey butter, milk, and cheeses, as well as steaks.

I found that seafood was of the highest quality when I joined hotel Manager Simon Dufty for dinner at La Fregate.  Over a dinner of local scallops, Dufty said he lives on the rival island of Jersey, which he explained to me is quite different than its smaller neighbor.   Simon’s weekend commute is by ferry, or often, by air.  It’s a ten-minute flight!

Nearby Jersey has everything that Guernsey is glad NOT to have, like high rise hotels, MacDonald’s, and way more people.  A lifelong Guernsey resident I met said it’s like two sisters, one of them is prettier than the other and they just don’t get along. That’s what Guernsey and Jersey are like, she explained.

Peter Perrio is a fisherman who has lived on the island for decades.  He was wearing a particularly good-looking navy blue sweater on the windy day that we met. He explained that these well-made sweaters come from Le Tricoteur, a factory that knits and sews these sweaters right there by the beach on the island.

We met the weavers and I walked out with a sweater that I might never want to take off. It’s just about the best ‘jumper’ I’ve ever worn!

Right next to Le Tricoteur is one of the Guernsey Pearl stores, where they create necklaces and bracelets from the freshwater pearls that are raised in mussell’s shells. This affordable and beautiful jewelry was a big hit with my girlfriend Rachael upon my return!  There are three pearl shops on the island.

While Guernsey is a compact island, there is still an active agriculture movement, and I learned a bit about raising pork when we took a farm tour with Nicky Terry, who helps run Wallow Farm.

The animals they raise here are Oxford Sandy and Black pigs, and they don’t get any table scraps, just grain and all of the roots they can dig out of their paddocks with their snouts.

Terry offers a fun half-day tour that starts at their farm, touring the pastures and learning about the pigs, then a pleasant walk through forest trails all the way to the ocean.

Walking along the beach, Terry pulled out photographs of what the German bunkers looked like and provided interesting commentary about those dark days in the early 1940s when people were prisoners on their own island. The tour ends at the picturesque Imperial Hotel, right on the water, with local charcuterie, a pork pie and a gin and tonic with local gin. READ MORE.

One of the island’s top spots for visitors is the Rocquette Cider Company.  Here you can sample and purchase delicious ciders packed in kegs and bottles.  On the day we visited, spry 90-something Craig Alexander was manning the taps.

He showed us a shiny brass still that had been imported from Germany, the same as the one used by Luke Wheadon.  “We’ll be making vodka, gin, rum and other liquors soon,” he said.

The States, as the government is called, owns the local airline, Aurigny, and offer direct flights from London Gatwick, Manchester and Bristol. There is also a ferry from the UK and from St Malo, France.

Another option is the discount carrier, FlyBE.

Guernsey’s location and a tradition of farming and fishing bode well for diners. The Guernsey butter is all it’s cracked up to be, that and the butterfat rich Guernsey cream.

A popular place right along the harborfront is the Crow’s Nest Bar and Brasserie, a cozy and informal two-story eatery on Victoria Pier, the main drag,  with a good menu. I enjoyed my salt and pepper prawns and calamari and my companions had steaks, all good.

This trip was hosted by Visit Guernsey, but the opinions are the author’s own.  Find out more about the island at Visit Guernsey.com 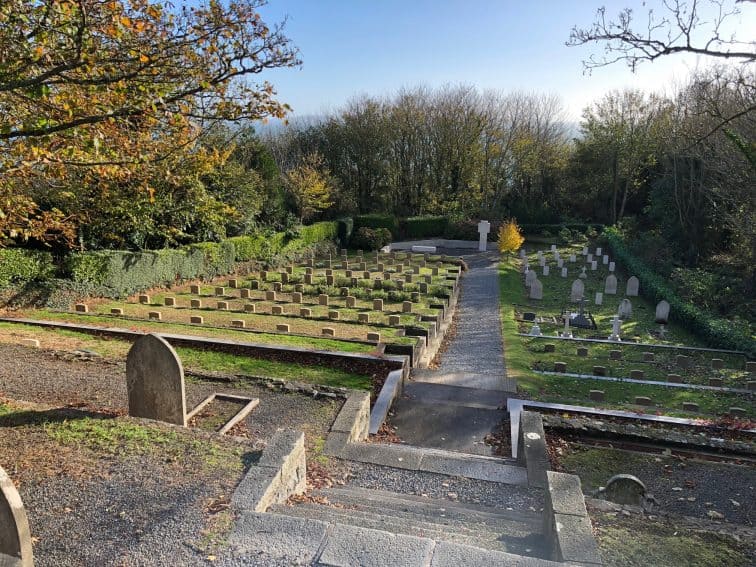 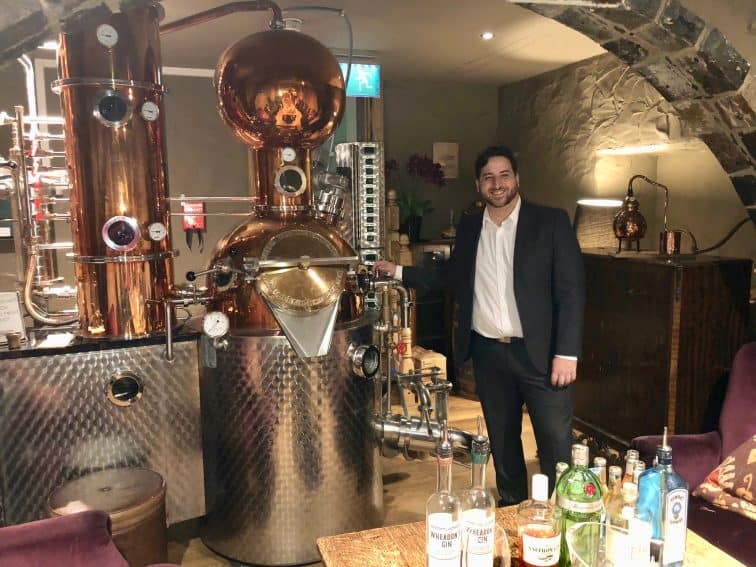 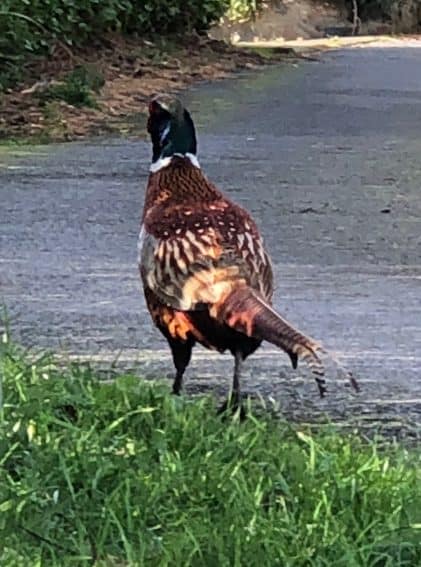 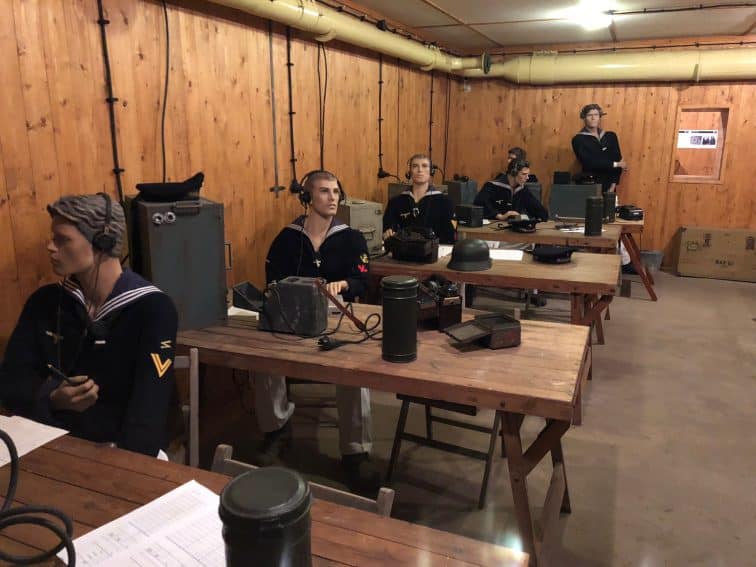 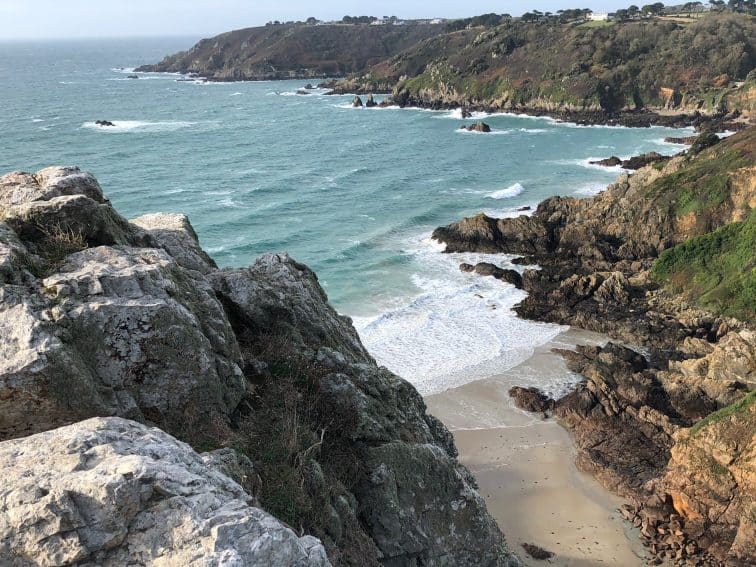 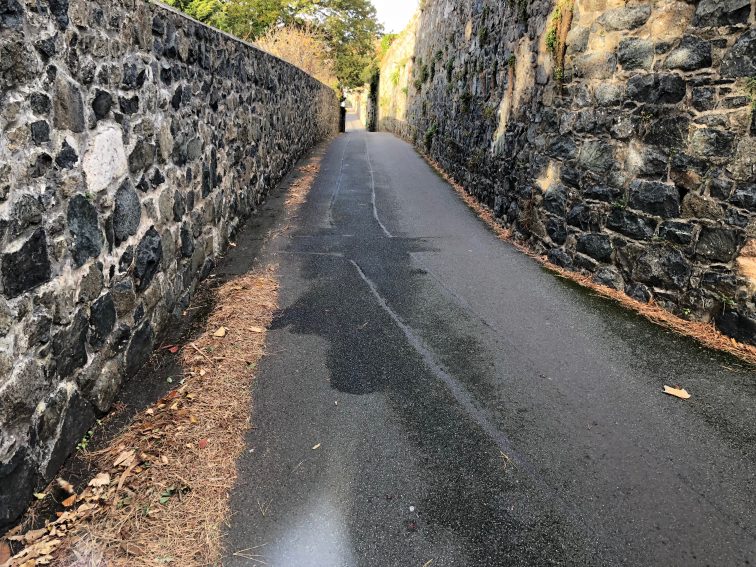 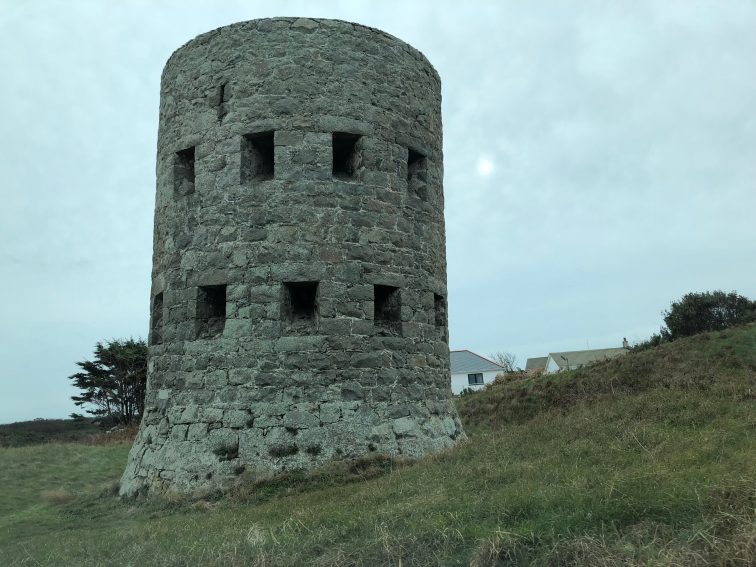 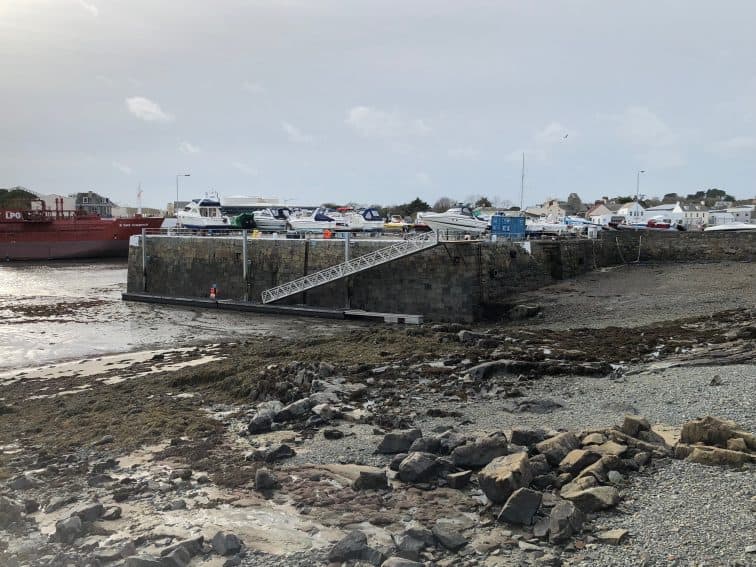 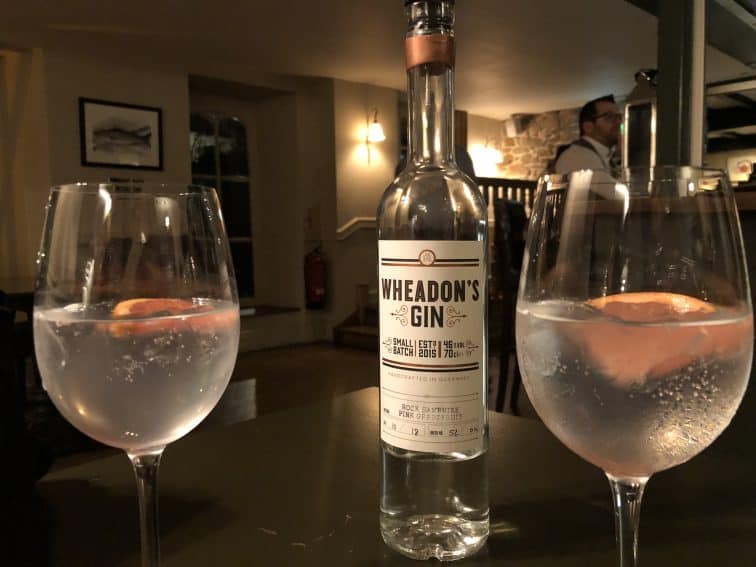 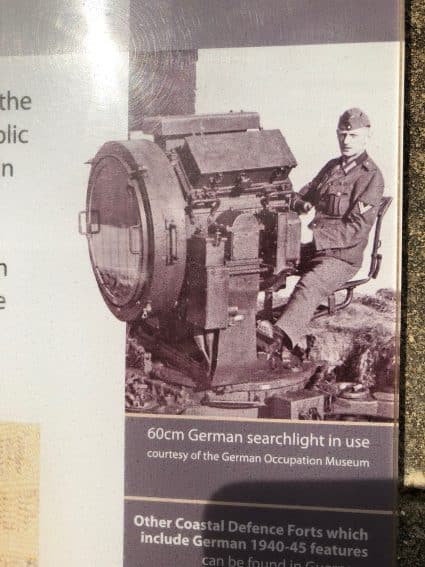 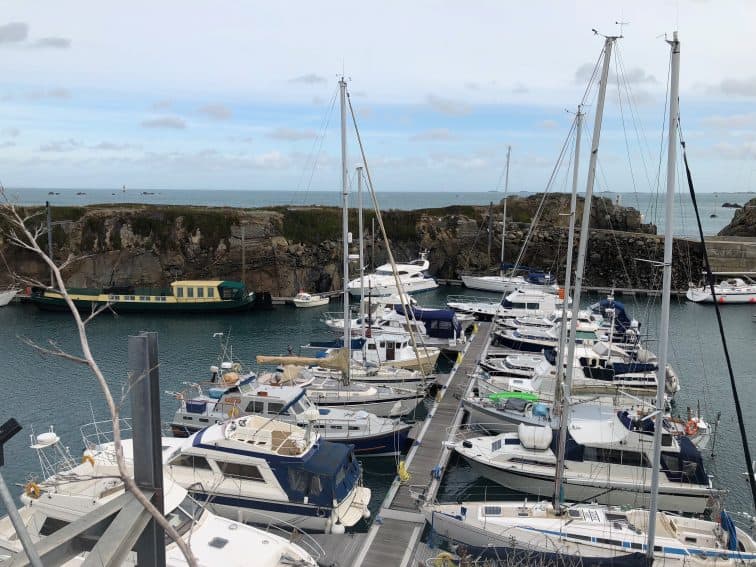 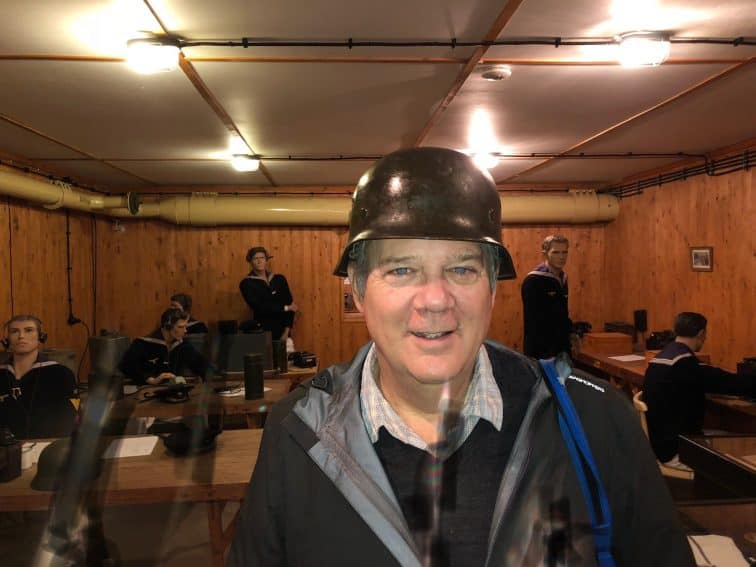 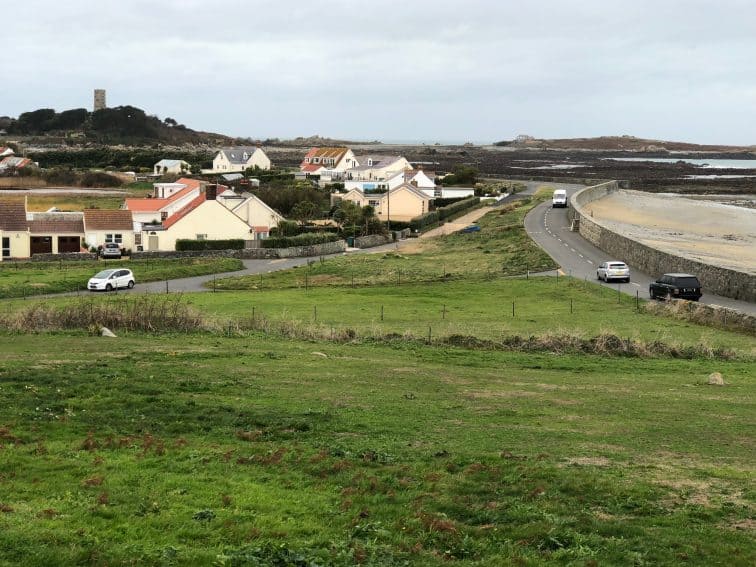 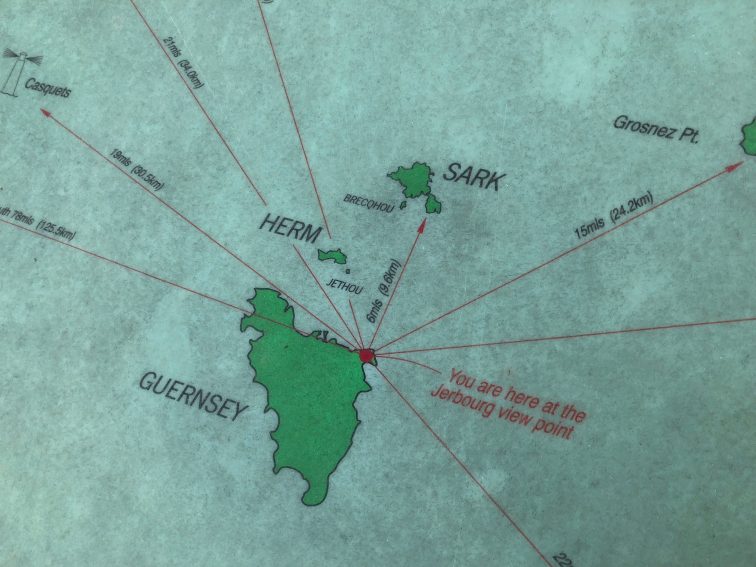 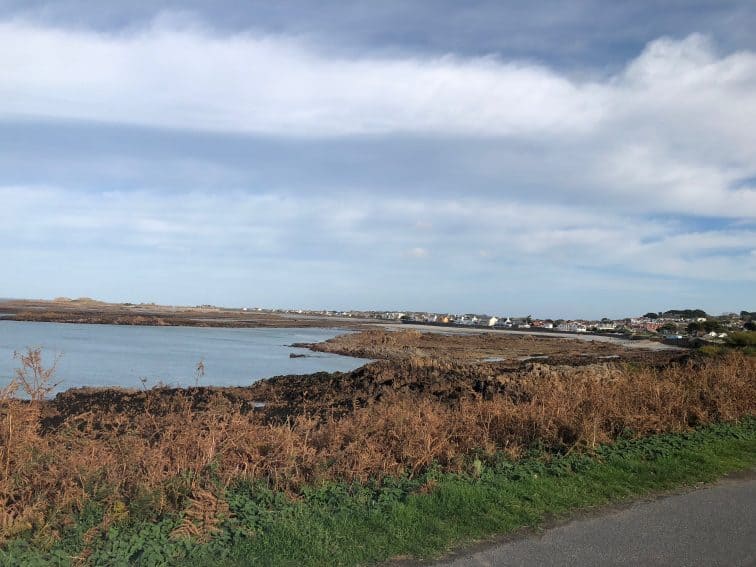 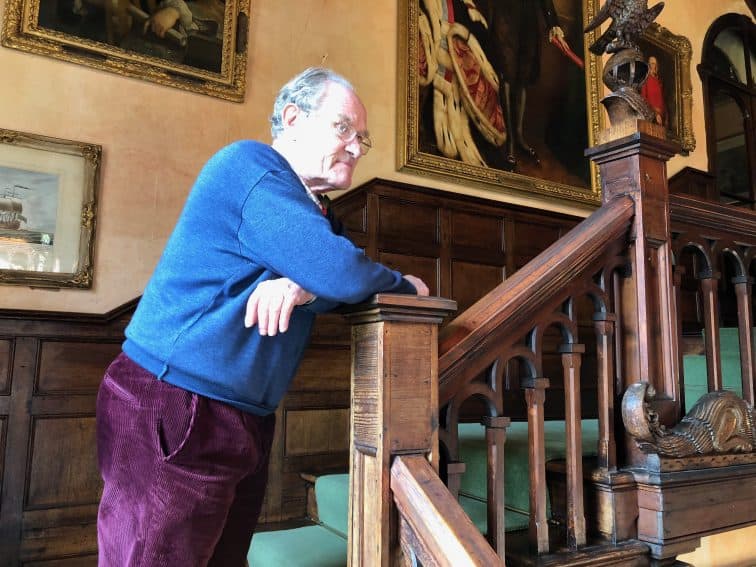 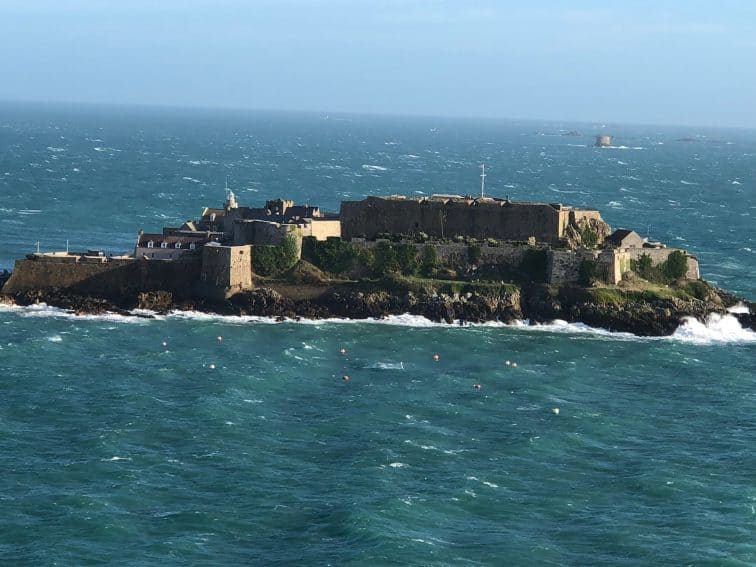 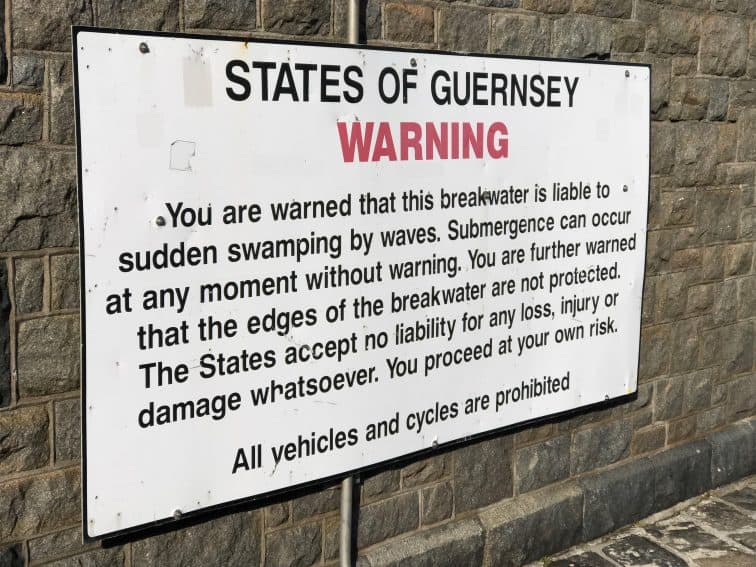 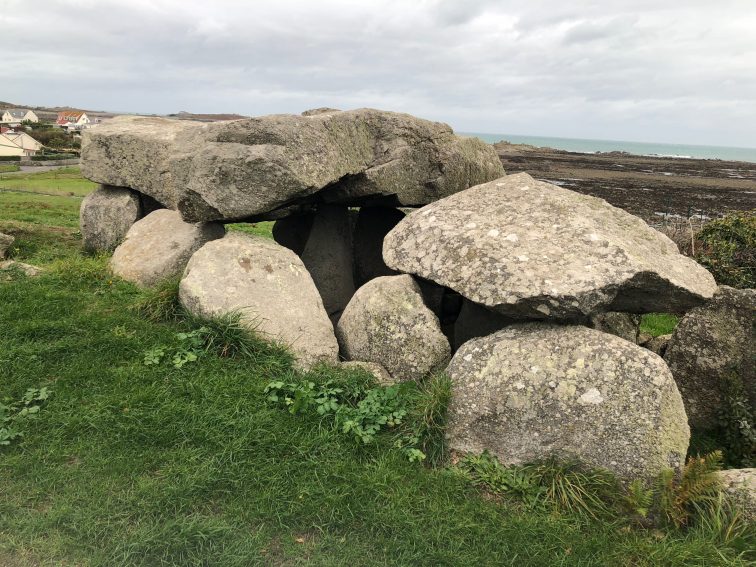 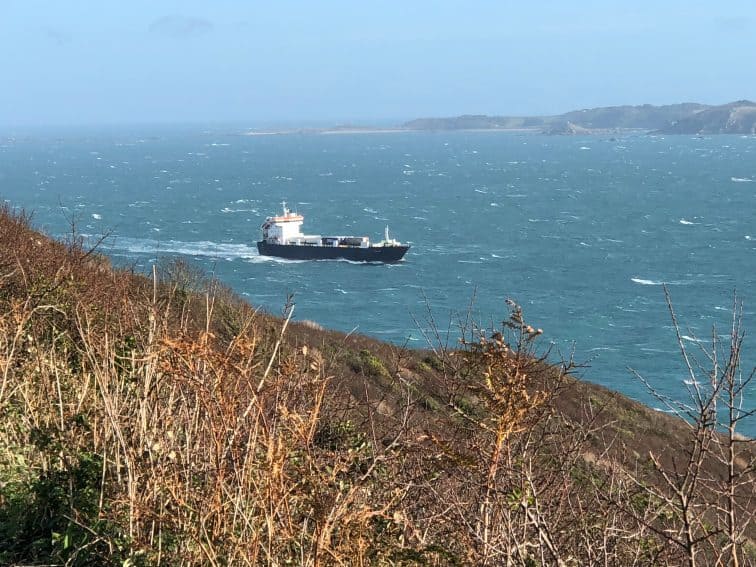 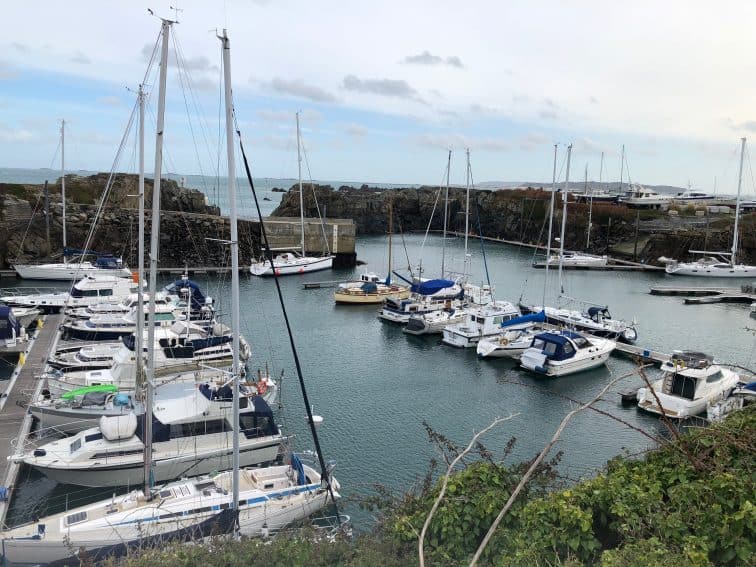 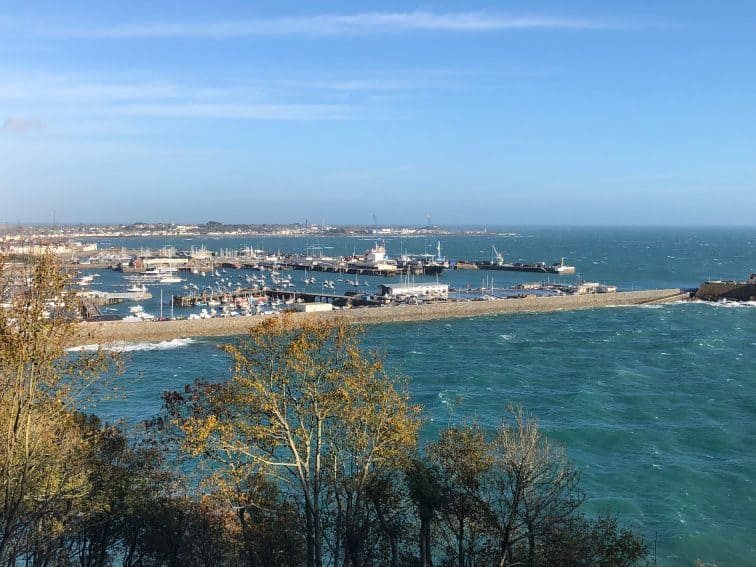 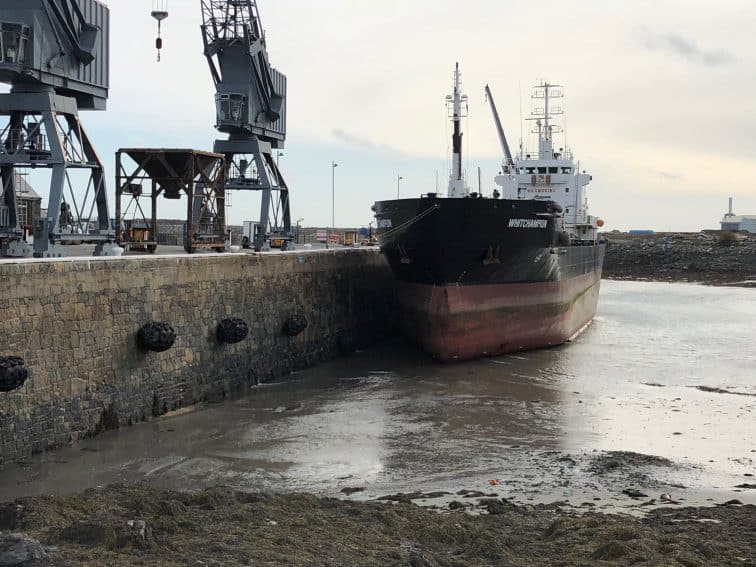 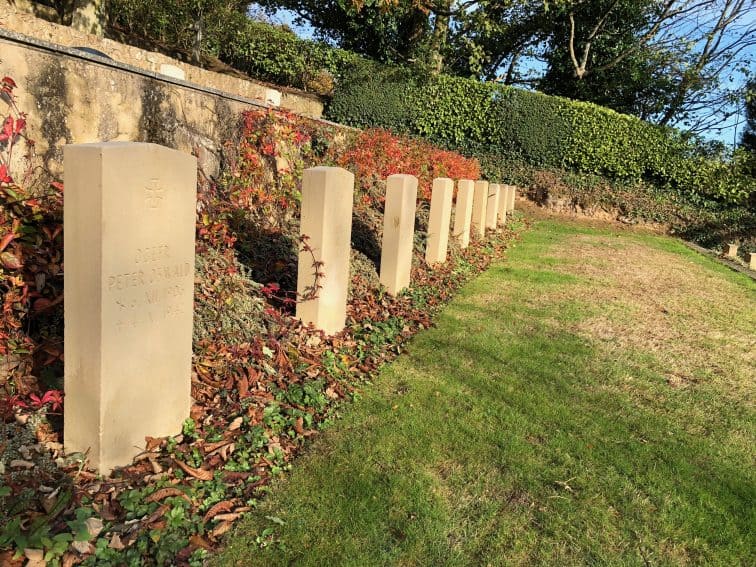 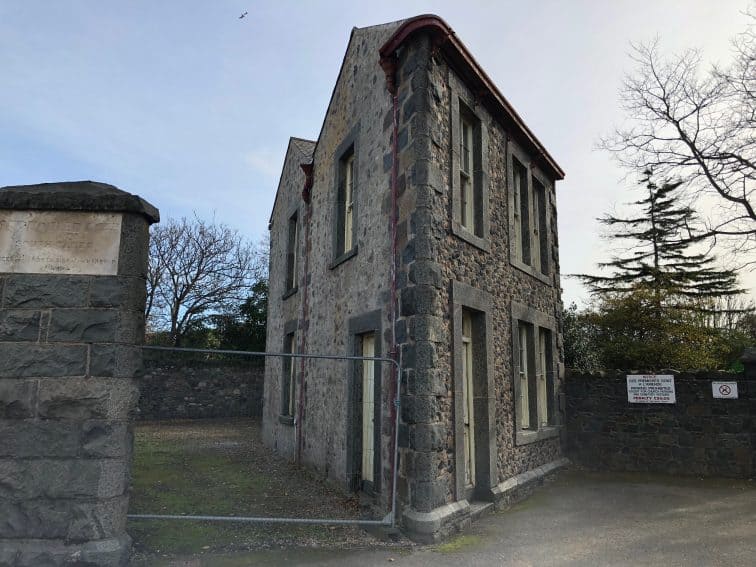 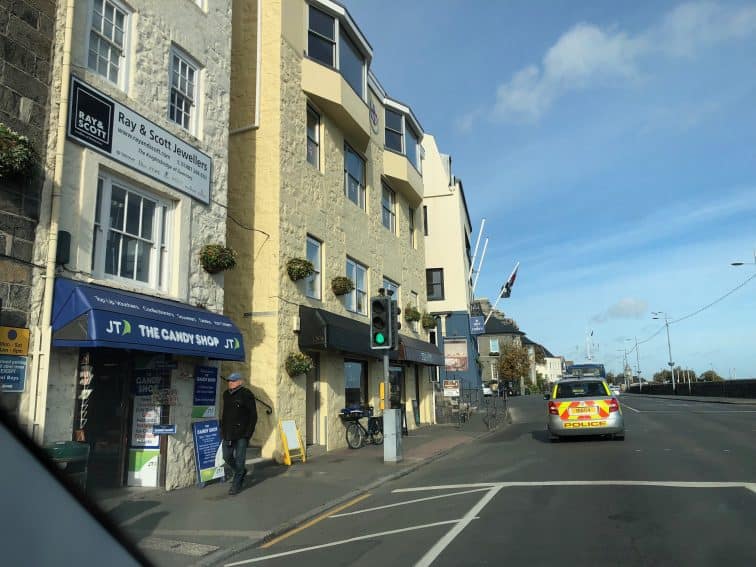 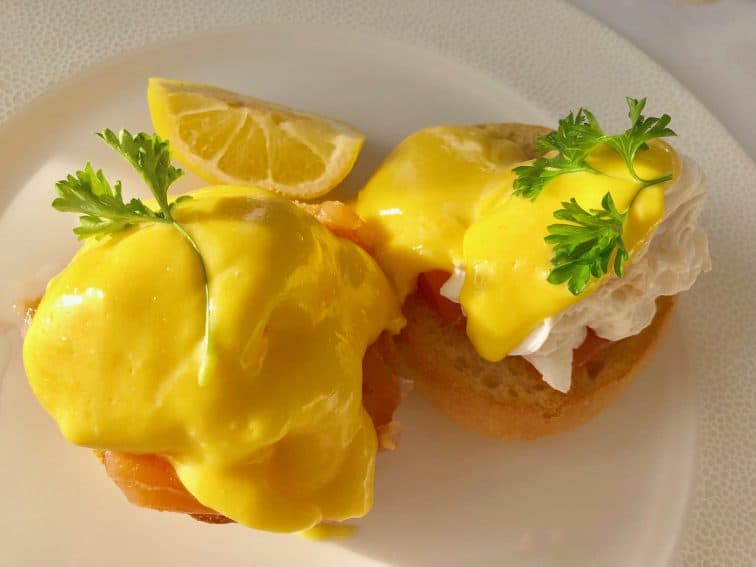