Dogtown is an Abandoned settlement Full of Mystery and Legend on Cape Ann, Mass

Hidden in northeastern Massachusetts, Dogtown is a place, part park and part abandoned settlement, that is equal parts legend and history. Its eerie tale encompasses war, witches, and an eccentric millionaire, all set before the bleak backdrop of the howling of feral dogs. Located on Cape Ann, Dogtown was settled in 1693 and abandoned in 1830.

The best way to enter Dogtown is via the trailhead off of Cherry Street. This area is also easily accessible from Route 128, locally designated Yankee Division Highway. The trailhead here is equipped with a large but simple map and a mailbox purportedly meant to contain maps.

Do not count on this; map reservoirs in Dogtown are often empty. However, entering without a map is inadvisable. The area is expansive and complex, measuring 3,600 acres, all full of surprises.

Prepare to devote an entire day, and consider bringing a GPS-enabled device. Trail apps do cover much of the area, which otherwise represents easy hiking and features relatively little elevation change.

However, only the main loops are reliably marked with blazes, and even these sometimes disappear and give way to barely visible goat paths. The danger of getting lost is very real. In addition to app or GPS trail maps, it is worthwhile to print a map prior to adventuring there.

Though the entire area enjoys cell phone coverage, going prepared is the key to an enjoyable day in the woods. Better yet, the Dogtown Common Trail Map will direct you to landmarks that GPS and app trail guides don’t include.

The maps also feature numbers that sometimes correspond to markers nailed to trees; these can provide clues as to your location and nearby points of interest. The park is full of hidden gems and rewards prior research heartily, especially since not all of its interesting features show up on the official map.

When embarking from the Cherry Street trailhead, expect some noise. There is an active police firing range nearby. In the fall, gunshots may reverberate far into the park, which is open to hunters as well as hikers, equestrians, trail runners, and mountain bikers. As a result, Dogtown is often less than optimal for wildlife spotting. However, squirrels and chipmunks abound.

There are several other entrances to Dogtown, including one on its eastern side, which is flanked by Route 127 and located near a gravel quarry. The Babson Museum resides on this road as well. In place of the sound of gunfire, a hiker approaching Dogtown from this direction may have to contend with the presence of trains.

The affectionately nicknamed “Purple Line,” a high-speed Boston area commuter rail, blazes through this section of forest, giving very little audible warning and appearing swiftly from around a bend. If you intend to use this entrance to Dogtown, do so cautiously.

Further entrances can be accessed on Squam Road and Summit Avenue, both of which are located on the northern edge of the park. Summit, in particular, wears its name well. A water tower distinguishes this high-elevation area of the Common.

One of the greatest pleasures of Dogtown is the discovery of its many secrets. The first of these is that Dogtown is not a park. Its designation as a “Common” means that the area belongs to all residents of the city of Gloucester and is available for public use.

Despite this, there’s a surprising dearth of trash in Dogtown’s interior, possibly because full exploration of Dogtown’s trail loops often comes out to over five miles on foot. There are no campsites here, and fires are strongly discouraged due to a bad history with out-of-control blazes.

Add this to the inconsistent trails, and the area becomes a poo pick for partiers. Dogtown is also, for lack of a better word, spooky. Even today, it resonates with the echoes of civilization. Dogtown was once a community that, if not strictly thriving, was certainly lively.

Originally called the Commons or the Commons Settlement, Dogtown earned its name during the Revolutionary War when so many men left to fight that the remaining women started to keep dogs for companionship and protection. As residents died during the town’s decline, these pets became feral and ran wild. The wild dogs are gone, but the name remains.

Dogtown was originally settled by farmers in the mid- to late 1700s and abandoned within 100 years. Visitors to the modern trails will wonder heartily at the fact that agriculture lasted here at all. The land is extremely rocky and quite hilly, too. The terrain has an interesting variability and supports an active quarry, but doesn’t suggest bountiful harvests.

However, it may have supported cattle grazing quite nicely when it was cleared of trees. The area that is now wooded was still used for cattle pasture until as late as the 1950s.

The 18th-century settlement left behind foundations and low stone walls that still populate the forest today. These remnants of human habitation lend the entire area an eerie quality, which is amplified by the fact that foundation holes left by the settlers are notoriously hard to spot.

Legend has it that one of the final residents of the area tripped and fell into one of these hazards while it was full of water and half-frozen, requiring a rescue. This is the incident that is supposed to have eventually inspired the creation of the foundation numbers by the 20th-century philanthropist and millionaire Roger Babson.

These are largeish rocks set on the trail side of the old house sites. They are carved with numbers and painted black, a strong contrast to the light gray granite. Some are accompanied by more modern tour stops mounted on small wooden pedestals.

These belong to the Digital Dogtown program, an Eagle Scout project by Alan Davis. Each pedestal bears a small, simplified map and a QR code that allows hikers to connect to informational websites about Dogtown’s history. Unfortunately, in 2013, Digital Dogtown sites were vandalized en masse.

The perpetrators were never identified. Since then, the stands have been repaired, and scanning the codes adds an interactive layer to a hike on the main trails. Be sure to install an app capable of reading QR codes before you visit. There are currently twelve active Digital Dogtown stations. 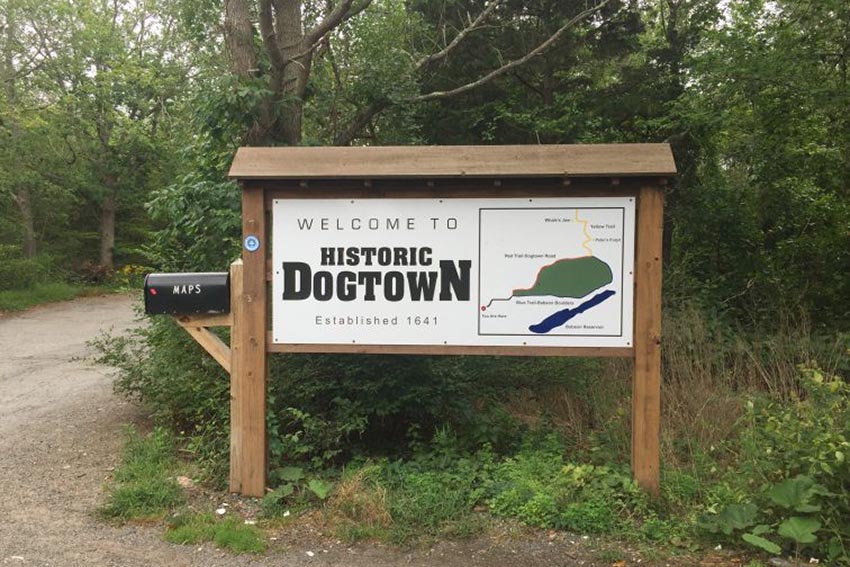 The foundation stones and Digital Dogtown stations are not the only permanent interactive features of this area. The area that used to be Dogtown Square – essentially, downtown Dogtown – is currently marked with its own stone, another artifact of Roger Babson’s legacy.

The word “Moraine” is carved on a rock nearby. This may be a tribute to the glacial forces that shaped the Dogtown area since the fingerprints of these titanic forces still show strongly on the many deposited boulders and dirt mounds present throughout the Common.

However, the most famous stone carvings by far are those that communicate Roger Babson’s eccentric philosophy in pithy sayings that continue to delight hikers to this day.

Roger Babson was the scion of a successful family that could trace its roots to the early days of European settlement in North America. In his youth, he was a successful financier, so much so that he weathered the Great Depression comfortably.

During this time, he was distressed by the suffering of his neighbors in his hometown of Gloucester. Using his great wealth, he devised a way to support the community by mapping the cellar holes of Dogtown and marking them with the carved stones.

This plan employed stonemasons and helped unemployed workmen of Gloucester to survive during a time when other work had disappeared. However, Babson’s activity didn’t stop with the foundation numbers.

In the spirit of either civic goodwill or desire to communicate his personal philosophy to the world, he directed his stonecutters to carve words of sometimes questionable wisdom on two dozen of the glacial boulders scattered near what had been Dogtown’s central square.

Nearly two dozen of these are located on the aptly named Babson Boulder Trail, which runs from Dogtown Square back to the main road that leads to the entrance of the Common.

Some are obvious and easy to find, but others are scattered nearby or turned away from the path. Since the square is relatively accessible to the Cherry Street entrance, and since the trail itself is fairly clear in this section, finding all of these represents a good challenge and possibly an engaging day activity. 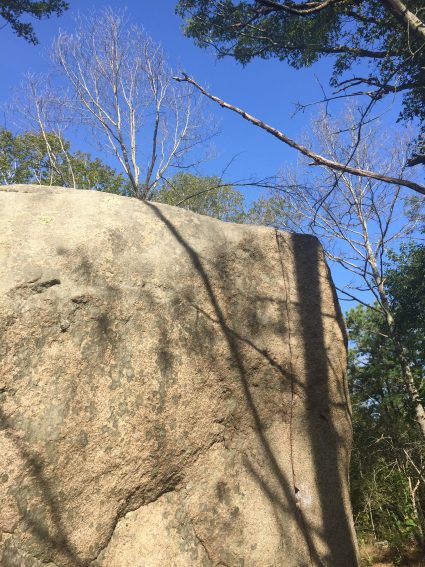 Inscriptions include “GET A JOB,” “SPIRITUAL POWER,” “USE YOUR HEAD,” and “KEEP OUT OF DEBT.” Babson also founded a college. His museum, on the eastern side of the common, is worth visiting for tourists interested in more information about his life and activities.

The boulders of Dogtown fascinated visitors for decades before Babson improved them. Central to the common, the giant boulder called Whale’s Jaw is still a good place to stop and eat lunch.

Today, the meaning behind this descriptive moniker may not be clear, since Whale Jaw is now a roughly triangular, shapeless lump of granite not unlike the rest of the rocks for which Dogtown is famous.

However, prior to 1989, the formation’s resemblance to the mouth of a surfacing whale was clear. The angle of its neighboring rock, which split in half that year, made it a famous landmark.

Currently, the area is covered with trees, but it is likely that in the days when Dogtown’s trees had been cut, this would have been a good place to survey the area. Befitting an offbeat place, Dogtown has been the home of many eccentrics and social misfits.

The reservoirs, of which there are two, reflect the sky and surrounding glacial hills like mirrors, and Gloucester’s windmills can be seen from some places. In others, the sound of the train and of quarry machinery is discernible over the background of birdsong. Near the swampy area to the north, insect activity may become a nuisance, though cooler temperatures will suppress this issue.

Dogtown’s mystique has been the subject of several books, a handful of which are available in bookshops in nearby Gloucester. Locals are often happy to talk about their quirky quasi-park. Over the years, alternative proposals for use of Dogtown, including a nuclear power facility, have failed in the face of overwhelming affection for the Common as it is. This unique forest is highly recommended for day hikers.

After returning to civilization, tourists should also consider exploring nearby Gloucester, a charming seaside fishing town featuring a number of quality restaurants, shopping, art, and local flavor. Visitors in May also have the opportunity to enjoy Dogtown Days, a historical celebration of Dogtown by the Cape Ann Museum. 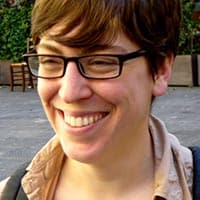 Anna Gooding-Call is a writer and librarian from Salem, Massachusetts.