Sky Waltzing Over Jaipur, India, in a Hot-Air Balloon

When I was writing about my last vacation at Naldehra, I was thinking that most of my vacations sound the same: I go to the mountains, I walk a lot and I take a lot of pictures.

But here was a break that was so different from any that I ever took! I have been to Jaipur in Rajasthan before but this hot-air balloon safari was really different.

I stayed at the Wall Street Hotel (don’t ask me why they picked up that name) and it is a decent hotel, located quite centrally in Jaipur and pretty good for the price they charge (Rupees 1800, Dollar 41).

My main agenda was the balloon safari; other than that I spent all my time in old Jaipur, in Bapu Bazaar and Jauhari Bazaar, shopping for my family and myself and visiting the Hawa Mahal.

I am told that the balloon safaris happen either early in the morning or towards the evening because the weather conditions are favorable at that time. I had a 5:50 am pick up from my hotel to the safari site.There was a time when I thought nothing of getting up at 4:45 am but no longer. When I set the alarm for 5:15 am for the next day I was not a happy camper.

I also kept on waking through the night due to the fear of sleeping through the alarm so finally when I got up at 5:15 am I could have slept more. But then I do not like to be late for any appointment and I was down in the lobby by 5:45 am.The Sky Waltz car duly arrived by 5:50 and it had other guests who were going to go up in the air along with me that morning. We were six in all, along with the pilot Thomas Dattler from Australia.

A Sight to Behold

I knew our balloon would take off near the Amber Fort. When our car approached the fort, there it was, a big colorful balloon in the process of being inflated, near the fort grounds. As soon as the car came to a stop all of us broke into a mild run to get closer to the site.Of course it attracted many onlookers as well. And at least three people in my group were retired folks from the USA! Imagine all of us running at the sight of a balloon!

Soon the balloon was inflated and we were about to board. We were supposed to be six people and suddenly we found that we were seven! Someone asked pilot Thomas if he would take seven of us up. He said he would check the weight, but by the look of it he seemed to be extremely unhappy about it.

Then someone from the ground staff of Sky Waltz pointed to a gentleman and said he was not with us.

When asked further, he said he got into the balloon to get a picture! And sure enough, his friend was clicking his picture! They said they were from Persia. That is the kind of the lure a hot air balloon can hold for adults! The mystery of the extra passenger now solved, the rest of us were ready to board.

Getting inside the basket takes some effort. You have to climb up a step chair place your legs in the cuts in the basket, sit at the T-point and hop in, takes about five seconds in practice. Our security briefing mainly involved landing. We were told which side to face and how to take the brace position for landing.

Up, Up and Higher Up in the Air

Before the flight, Thomas had expressed the hope that knowing the wind direction, we might fly directly over the Amber Fort. But when the balloon started lifting up, the wind had other ideas.

First of all, we didn’t realize that we had started flying when we were just a few feet above the ground; it was Thomas who pointed out, “Look we are already flying!” The ascent was gradual and you feel the wind on your face and not the air conditioning of a commercial aircraft.

We did not fly towards the Amber Fort, and when one of us asked why, Thomas said, “It is where the wind takes you, I cannot control the direction!” We still got the view of the fort for quite some time even though we were steadily moving away from it.

To me it felt perfectly safe to stand in a basket suspended from a balloon where the pilot had no control over the direction. There were no sudden motions and it was only after some time that I realized we were at a considerable height. I asked later what was the maximum height we gained and I was told it was 1500 feet.

The wind took us over a body of water, and Thomas suggested we should lose some height and go closer to it! Two of us told him it didn’t sound like a good idea as the water looked cold and uninviting for a dip. He laughed it off and we lost height. It felt colder over the small lake.

We also saw the reflection of the balloon over the water after Thomas pointed it out for us. At one point the Jal Mahal was also visible far away on the horizon.

About the views from the balloon, well, it has to be quite similar to the landing and takeoff from a plane, but you get to feel the wind on your face.

Also the balloon ride was completely silent, apart from some noise when the burner is pressed to get the flames up and heat the air inside the balloon.I thought I heard commercial jet conversations on the handset that Thomas was using, and I later reconfirmed with the Sky Waltz people and they said that was correct. One of the views that have stayed with me is white egrets flying close to the trees, much below the balloon.

Soon enough it was time for landing or so it felt to me. If someone asked me how long I was up in the air, I would say 10 minutes but we were up there close to an hour; the time just went by in a flash. We started losing height and down below in the villages people would wave to us.

Thomas told us that the fields ahead looked like a promising site for landing, but after a while he said he had to look for something else as there were power lines close by. So we glided over treetops and villages, waving to people below for some more time.

After a while he told us to take the brace position as we were about to land and there would be a few bumps along the way. There were three mild bumps in all and we were on terra firma once again. We clapped for the pilot in unison!

We Got the Entire Village

We now had to wait for the ground crew to find us, who had been in touch constantly through the wireless device. But in a few moments we were surrounded by the friendly folks from the village.Pilot Thomas asked them to talk to the ground crew on the wireless and tell them our exact location.

So the village people gave the ground crew directions and assured them that they could bring in their vehicles to the landing spot.

My co-passengers from the US used me as an interpreter to talk to some people who had gathered. We spent quite a few minutes surrounded by people in the balloon who would scatter as soon as Thomas pulled his burner.

I asked Thomas how many flights he had done in India and was it always like this? He replied, “I have been here for 20 days and I have gone up every day. Yes it has been the same, sometimes a little less people if we land really far away from a village.”

Once we disembarked, I ran some distance ahead to capture a video of the scene of our landing.

While I was in the balloon Thomas handed me my first ride certificate that said “… it will always remind you of the exhilarating sky ride far above the realms of the earth… somewhere you will always long to be again.”

And how true it is; for the past few days I have been looking at my pictures and pictures of balloon flights on the web and wondering if there is going to be a next time! 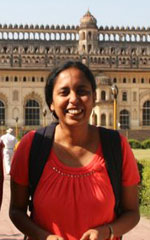 Mridula Dwivedi, shown here in Lucknow, is an Associate Professor of Human Resource Management at a college in Gurgaon, India. She loves to trek and travel in India and, when the opportunity comes along, abroad too. Read her award-winning blog, traveltalesfromindia.