86 miles on the Erie Canal in New York State

By Sharon A Roth

As I write this on Independence Day here in New England, the Erie Canal is marking its 200th birthday. It’s clear the workers were not at home sitting in lounge chairs eating barbecue and bending their elbows back then! (In fact, who built the canal is a whole other story.)

Some basics about the Erie

Before our trip, I read about the canal in these two books:

by Jack Kelly and Wedding of the Waters: The Erie Canal and the Making of a Great Nation

by Peter L. Bernstein. There are quite a few books out there, but these two came with the highest recommendations.

And then I learned quite a bit more up close and personal on the water while maneuvering a twelve ton, thirty-four-foot barge!

But this little experience of mine really is the proverbial drop in the bucket, ah, canal, as they say.

The Canal is 363 miles long, 40 feet deep at best, and connects the Great Lakes with the Atlantic Ocean via the Hudson River.

With the exception of Binghamton and Elmira, every major city in New York falls along the trade route established by the Erie Canal, from New York City to Albany, through Schenectady, Utica, and Syracuse, to Rochester and Buffalo. Nearly 80% of upstate New York’s population lives within 25 miles of the Erie Canal.

Historians say the Erie changed the face of America, clearly the stories in and on the canal, and heck, next to, are many and varied. 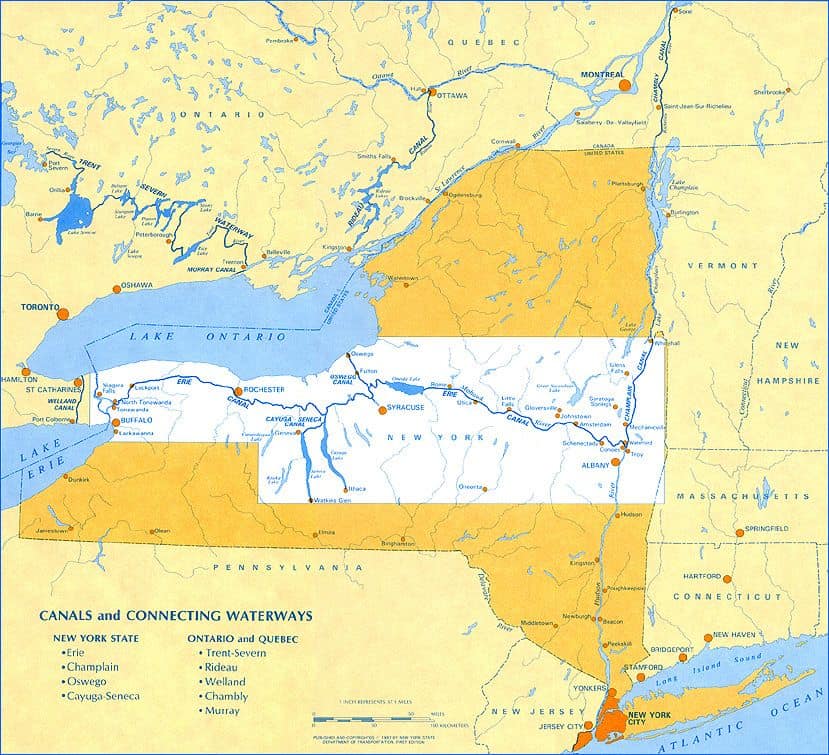 We rented the 34 foot Oneida boat from MidLakes Navigation at their Marina in Macedon NY for seven nights. You board on Friday at 2 and return it to them by 9 am the next Friday.

The company, in business for almost 50 years themselves, provides an excellent orientation that includes going through Lock 30 twice before you become the captain.

My husband sailed as a youngster on Long Island Sound, I’ve rowed a boat. These experiences helped us out, but Mid-Lakes Navigation has designed a barge almost anyone can operate.

We started in Macedon, made it to Holley, stopping at Spencerport, Brockport, and Fairport and then returned to Macedon. There were variations on the practical things at each town’s dock: shower, restrooms, laundry, markets, restaurants, benches, green grass and people to meet.

A Dock Master eventually finds you after you dock to check in with you. You sometimes pay a fee, although most of the towns were free docking which included water and electric hookups. You were given a code so that you could use the facilities.

The rental boats come with everything you need, but we found an occasional shower in a larger space was nice. And, as this week was one part of a three week trip, we really appreciated the towns with access to a washing machine.

You can stock food if you wish as there is a fully stocked galley with pots and dishes and more, or you can dock and eat your meals in restaurants. We did a little of both.

In seven days, we met through bikers (Albany/Buffalo), local and family walkers and bikers, hikers, fishermen and women and children, Dockmasters, Lock Masters, people doing the Great Loop, people who spend five months of the year on their boat moving between three to five towns, and locals who love and hated the Canal.

(Especially if you had to deal with a lift bridge in your daily commute in a car.)

It was, for me, a real taste of the sweet side of today’s America. I’ll wax a bit romantic and yet I think it’s truer than not.

Those on vacation being served by those working to help them enjoy their vacations, and provide them with a job in a restaurant, snack bar or other support services to recreational boating is a rewarding thought.

Over and over complete strangers exchanged in conversations; perhaps not about politics, but that’s okay, life is more than what’s on the news stations and in the papers. (And few on the canal listened to the news anyway!)

Through bikers can check in with the Dock Master, and use the facilities, and pitch their pup tents right alongside the canal.

One evening we spent great after-dinner hours with three bikers going from Buffalo to Albany; three men taking a trip without their families and their work in the Navy shipbuilding yards and companies.

In one town, at a locally famous diary, we watched eight young high school/college-aged serve upwards of 50 – 75 people ice cream.

We were in that line and we had our ice cream in under 15 minutes. Smiles and “how are you”s and “how can we help you” from local shopkeepers, police, and others abound.

It could be that when you live your day slowly you smile more, you stop and talk more and as one fisherman said who got out a fishing tool to help us repair a bike pedal, “I’m just watching the day go by.”

Life at seven miles an hour

On our week on the Erie, we did indeed watch the day go by, and it never went more than seven miles an hour.

We were initially wishing we didn’t have to retrace our tracks in order to return the boat, but very quickly the first day out, we changed our minds. When you get a chance to feel and see something wonderful a second time, it is indeed twice as wonderful.

We quickly learned that the social expectations and etiquette were if you were on the dock, you were fair game for conversation.

Even if we were on the boat, folks bent down, said hello and engaged us. Sometimes the weather, the boat, where we were from or just hello was what we talked about.

In between these ports of call was the scenery, the birds, waving to everyone along the path, and I mean everyone. Strangers who might be nearby when you needed to dock were happy to catch your lines and help out.

Cruising most of the time at 4 – 7 miles an hour (go ahead and try that in your car!) gave us time and space to think about those who built the Erie, those who worked in or next to it, and even those who likely died or gave birth on a journey on it. Its history is a huge and largely forgotten, part of American history.

I began to call our trip the “Vacation at the Speed of History”. It doesn’t quite work, yet this speed (or lack thereof) gave me a real feeling for how far you can travel in a day once upon a time. There’s a reason for the lyrics to this song about the Erie.

We haul’d some barges in our dayFilled with lumber, coal and hayWe know every inch of the wayFrom Albany to Buffalo

All about the journey

It was, to use another cliché, all about the journey and not at all about the destination. In fact, we had studied navigation maps, decided our itinerary, and promptly changed it after two hours on the water. After only one afternoon cruising, we chose to go slower and cover less mileage. We decided walking about a town sitting on the dock or in the boat reading, or just staring at the scenery was a fine way to watch the day pass by.

We could make it to the western end of the Erie at Lockport and back in six days, but we wanted to enjoy the passage, the Erie Canal and its natural beauty, wonder about the folks then and now. More importantly, we began to truly appreciate the opportunity to almost travel back in time and experience a little piece of American history, and the Erie as it once was in its heyday.

Along with the Erie, we were celebrating an anniversary as well – 45 years of marriage. What better place to go slower, to think about the past, wonder about the future, and just enjoy life?

By the way, in six days we covered approximately 86 miles.

Sharon A Roth is a retired education professor who loves journeying to other places, good food, folk music and cooking. She lives in Greenfield, Massachusetts.