Kyrgyzstan Sports include this unusual variety of polo

Dead Goat Polo may not be the most charming name for a sport, but it certainly does what it says on the tin.

Raiding and kidnapping the neighboring village may no longer be as acceptable as it once was (though bride-napping remains in vogue), but in its place, the Kyrgyz have a surrogate pastime that offers the same outlet for aggression and a similar showcase for horsemanship.

Each weekend in summer, and on a number of special occasions, too, mounted armies up to 200 men strong go head to head in hundreds of valleys across Kyrgyzstan.

Their battlegrounds of choice are long, flat pitches alongside the rivers, armor ranges from rugby skull caps to leather coats, weapons include whips and fists, and the stakes are high: clan pride and the carcass of a dismembered goat both hang in the balance. The weekend’s entertainment has begun.

I watch one Saturday morning in the village of Ashu in the Chong Kemin Valley. The village is only an hour or so from Bishkek, but it feels a world away.

An Avalanche of Horsemen

When I arrive the pitch is empty, bar a small dog chasing its tail to one side. I wonder if I have the timing wrong but no, it is 10 o’clock as planned. I stamp my feet and wait.

All of a sudden, in the far right of my vision, a solitary horseman appears on the ridge, a black dot careering down the hillside. It is as if he has started an avalanche, as in his wake a dozen more men on horses come flying, apparently from nowhere.

As they draw closer the thud, thud, thud of hooves bounces off the slope that serves as a stand for spectators, and you can hear the continual panting and hissing of men and beasts.

Kyrgyzstan’s horsemen claim originally to have come from Siberia, and the blood of Genghis Khan’s marauding hoards runs thick in their veins.

Seventy years of Soviet rule and forced urbanization were not enough to stamp out an almost reverential relationship between man and horse, and the standing of a man is still largely dependent on his ability to ride.

A match of Dead Goat Polo, or Kok Boru as it is called in the native Kyrgyz language, is two hours of testosterone-fuelled warfare.

How you and your team perform determines your place in the hierarchy, it proves that, whatever profession you may follow off the field, you are still a real man and true to your cultural roots.

No Knives, No Guns, No Swearing

The game begins when the referee, a fairly recent addition to Dead Goat Polo, rides to the center of the field. Thrown across the pommel of his saddle is the goat carcass, specially prepared for the match with its head and legs already removed and the resultant holes sewn up to prevent the spewing of entrails.

He runs through the rules at break-neck speed, a term particularly suitable in this context.

I’ll summarize the rules as no knives, no guns, no swearing, the last of which came as a particular surprise.

One of the players, whose day job was as a ranger in the national parks, assured me that the match would be “Just like football,” and that anyone caught swearing could be sent off the pitch. You could have knocked me down with a feather.

A final, acrid-smelling cigarette was tossed to the ground and the referee cast out the carcass, backing his horse away from it in the split second before the players dived forwards.

The four or five leading horses circled the goat, trampling it whilst their riders bent down, arms outstretched, in a vague bid to grab a handful of fleece before being barged out of the way by another horse’s flank.

One man, a particularly wiry individual who appeared to be able to ride with only one knee hooked into the saddle, finally caught the prize and, in a single movement, wrenched his body upright and pulled the goat into his lap. Even with the head removed, the carcass weighed in excess of 60 lbs. This was no mean feat.

The rider’s break away from the pack was short-lived. The horses raced neck and neck across the field, veins pulsing and sweat pouring from their bodies. The men on their backs seemed possessed by an angry spirit, roaring and screeching, their arms and whips flailing manically.

Before the rider could reach halfway to the goal, a horseback fight broke out, both men wrestling with their arms and torsos, seemingly oblivious that they were each perched atop 1200 pounds of fast-moving muscle.

My eyes were transfixed to the scene, certain that one man must fall and be horrifically trampled. Still, they clung on.

As it happened, neither man kept hold of the goat; a third man, using the element of surprise, galloped alongside and snatched it out from under their noses.

Still physically entangled with one another, the initial pair could not respond quickly enough, and the goat stealer was now making good pace in the opposite direction, flanked by his teammates for protection.

A goal is scored when the goat is thrown into the center of a ring of tires, one of which is at either end of the field. The tires are placed around the top of a mound.

It’s too wide for a horse to jump over in a single bound, but getting one horse hoof up on the earth gives the rider additional height from which to drop the goat.

If he remains at the foot of the goal, the chances are that another rider will block his throw, thwarting his attempt to score.

Unlike in regular polo, there is no change of horses during the game: once a horse starts it must remain on the field until the final whistle.

Life at high altitude has made the men and horses as hard as each other but still, as the game draws to a close, adrenalin is no compensation for extreme fatigue.

The goat, now trailing guts and stinking, even from a distance, is barely in a state to be thrown; you put more effort into keeping the fast separating parts together than angling your toss.

The teams leave the field blood and mud-stained and distinctly bedraggled. Clothes are torn, everything is streaked with sweat, and several of the horses are limping after one collision too many.

Still, everyone is in high spirits and, as a show of appreciation, we pass round vodka and kvas (a popular fermented bread drink) to numb the cuts and bruises.

The goat, now well-tenderized, quickly disappears from view. We’ll no doubt see it again at dinner. 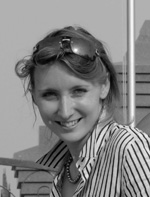 A graduate in Oriental Languages, Sophie Ibbotson lives and works in Central Asia and writes about history, culture, and politics in the region.