The Phlegraean Fields: A Family Excursion to the Gates of Hell

The Phlegraean Fields: A Family Excursion to the Gates of Hell

The Sibyl uttered her trance-induced predictions, Charon ferried souls across the swampy Styx, and Romans bathed in hydrothermal spas, all within an eight square mile area west of Naples, Italy, known as the Phlegraean Fields.

For my three girls (ages 3, 7, and 10) the wonders here include exploring active volcanoes, the Sibyl’s cave, the entrance to Hades, and ancient Roman villas.

The Fields of Fire

The Phlegraean Fields encompass a caldera or cauldron-like region of twenty-four volcanoes and craters, many still bubbling with seismic activity. Escaping the bustle of downtown Naples and the crowds of Pompeii, this region has fewer tourists and more eye-popping sites.

Here the kids can wander a mars-like terrain of the still active Solfatara volcano that the Romans once called the ‘Forum Vulcani’ or ‘The House of the God of Fire.’

Against one slope, two vents named ‘La Bocca Grande’ or ‘The Large Mouth’ endlessly belch sulfuric steam. In the middle, mud lakes sizzle at temperatures of up to 250 degrees Celsius.

Kids can also search for the god Vulcan under brick arches constructed by the ancient Romans and believed to have been a bathhouse. If they like science, four reflectors dot this terrain and work with the European Space Agency to map Solfatara’s ground deformations.

About a fifteen-minute drive from Solfatara, the hilltop settlement of Cuma dates back to the eighth century B.C when the Greeks colonized the area.

Kids can race through a trapezoidal hallway with shafts that pour light inside where, at the very end, two stone crevices squeak with pigeons.

Many, including the Roman writer Virgil, claimed that the Sibyl uttered her dual-meaning predictions inside this space. But archeologists believe this was simply a Roman military fortification.

Whatever the truth, after pretending to predict the future (we WILL have pizza today), my kids climb steep steps to an overlook of the sea, then wander a little further on to the Apollo and Jove temples, ruins whose flattened stones provide the imagination with chance sightings of these gods.

Archeologists have excavated a vast circuit of military tunnels built by the Romans. One in particular, the Grotto of Cocceio, runs from Cuma to Lake Averno, where the famed entrance to Hades exists.

But the grotto has been closed to the public since World War II due to structural dangers, so we drive to Lake Averno through pot-holed roads that seem to have been last paved more than two thousand years ago.

Once we reach the lake, whose name, Virgil explains, comes from the Greek word for ‘aornos’ or ‘the place without birds’, the water ripples inside a crater now replete with ducks and geese.

We park our car and go by foot along a dirt pathway until we reach a pitch-black cave. A personal tour guide, Carlo Santillo, hands us candles and we walk down this 300-meter long tunnel.

Halfway through, a narrow staircase – one of many corridors that veers off from the main tunnel – goes down into what our guide says is the entrance to Hades.

The staircase ends at a pool of water, presumably the swamp of Styx where Charon allowed only souls to cross. Aeneas and the Sibyl passed through here too in Virgil’s epic poem, The Aeneid.

Continuing further along the main tunnel, at the very end a grand staircase descends into a high-ceiling hall that might have been a restaurant, a bathhouse, or the waiting room for those wanting to hear the Sibyl speak her oracles.

Our guide says that the Sibyl sat both in Cuma and also inside this cavern. One way or another, the darkness, the candles, and the musty smell convince the kids that the god Hades still strolls somewhere through these corridors that probably were interconnected during Roman times, but now stop in water or dirt.

From Lake Averno a narrow road turns toward Lake Lucrino where the ancients once farmed fish and mussels. We wind up the narrow road and then follow the road signs to the Terme Romana, a vast complex of three terraces overlooking the port town of Baia.

Archeologists guess that these ruins were either baths, villas for wealthy Romans or the summer residence of the Imperial Court.

On the bottom terrace, an otherworldly dome hulks from the dirt, which travelers in the eighteenth century called the ‘Temple of Mercury’ or the ‘Temple of Echoes.’

We make our way inside the dome, crossing a plank over green-algae water and once inside, we yell high-pitched, our voices bouncing off the smoothed stone in rumbling god-like acoustics.

The Summer Residence of Julius Caesar

Not far from these ruins, the Baia Castle towers over a cliff. Although occupied throughout the centuries by many different owners, it is believed to have once been the summer residence of Julius Caesar.

Inside the castle, the kids dash through thick stone passages, up wide stairs, and reach an opulent dining hall. They say they’ve turned into princesses as they stroll regally on the blue tinted floor and bow to the Greek marble statues in alcoves. In the front niche a scene carved in marble shows Ulysses giving black wine to a Cyclops.

Returning back in the direction of the Solfatara volcano, fishermen work their nets in boats and sell live fish and octopus at the port town of Pozzuoli. Restaurants along the water provide a perfect stop for lunch or dinner.

It’s Italy, so any choice of restaurant is excellent, the menus brimming with fresh fish, mussels, octopus, and squid.

Spaghetti Vongole (pasta with clams) is a classic regional dish on most menus. And don’t forget that the Neapolitans invented pizza, almost every restaurant making theirs fresh in a wood-fire oven.

Best of all, Neapolitans love children – even ill-behaved ones – so waiters often take them to the kitchen to play.

After a Margherita pizza has made the predictions of the kids come true, we make our last stop at the Flavian Amphitheater, which stands on the hill of Pozzuoli not far from the port.

The seats used to hold 40,000 spectators in the first century A.D. Today, kids can pretend to be gladiators on the field and then race underneath the stadium where a maze of columns and inlets used to cage wild animals.

If it’s true that we come to know by experience, then the Phlegraean Fields are where adults and kids can touch and climb mythology and history. Here we make our own decisions about what these structures once were or decide not to puzzle over what’s history and what’s fiction.

Certainly, pretending to be goddesses, princesses, and gladiators among the stones of the ancient world provides a kind of learning unmatched by textbooks, homework, and classrooms.

The trick is to rent a car (preferably small to get through the narrow streets), drive cautiously, take a GPS with you, and then ask directions as often as possible. Even the locals are constant ‘direction askers.’ It’s part of the culture to feel confused by the streets, which tend to have no logic except that they were built to veer away from the ancient ruins.

Keep to the suburbs where traffic is mild. The best time to travel is Sundays when Neapolitans stay at home with their families and the streets are less congested.

Another option is the Campi Flegreo “Archeobus” which you can catch at Piazza della Repubblica in Pozzuoli. The bus runs every hour from 9 am to 7 pm Fridays through Sundays.

For More about Solfatara

The Artecard is a great way to save on entrance fees. American kids usually must pay half price, but if adults buy the Artecard, kids get in free. You can purchase the Artecard at most park entrances. Discount deals include three days, seven days, and up to one year.

For kid-friendly accommodations that are reasonably priced, the agriturismos often provide playgrounds and cultivate their own wine and food on-site. See www.agriturismo.it for all of Italy.

Ten minutes away from Cuma, La Vigna Agriturismo is a nice option.

You can also check: www.campiflegreipark.it for bed and breakfasts. 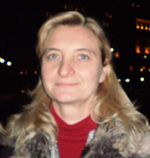 Barbara Zaragoza writes fiction and travel stories when she’s not trekking the ancient ruins of Naples with her three children. You can find more about the food and nooks of Naples at her blog, The Espresso Break.