It was a hot humid afternoon on a lazy Jamaican day. My Mom and I had arrived by cruise ship at Montego Bay earlier that morning.

When faced with an abundance of choices for shore excursions, we decided to go with one of the most popular tourist attractions in Jamaica, the famous Rose Hall.

Dating from the late 1700s, this statuesque plantation home ominously stands atop the hillside overlooking the turquoise Caribbean Sea.

Rose Hall was nicknamed the ‘calendar house’ because it originally had 365 windows, 52 doors, and 12 bedrooms.

The Legend of the White Witch Begins

My Mom and I eagerly awaited our visit to the mysterious plantation (originally 6,600 acres in size) hoping the catch a glimpse of the famous Annie Palmer, the White Witch of Jamaica, who lived, or should I say ‘ruled’ the plantation and its inhabitants.

Annie was said to be a short woman, not even five feet tall, but was said to have been exceedingly beautiful. In 1820, at the tender age of 17, Annie became the wife of John Palmer and this is where the legend began.

We made our way up the limestone front steps and into the grand entryway – right into the dark and even more humid cellar.

After choking down a cup of Witches’ Brew (a strong drink of rum with a little bit of pineapple juice), we were taken upstairs by a guide to begin our tour.

Although there are many versions of the story, it generally goes like this: Annie moved to Haiti with her parents when she was ten years old. Her parents died of yellow fever and she was adopted by her Haitian nanny, who was rumored to be a voodoo queen.

Annie was keen to learn and loved the results that her newfound magical abilities produced. Her voodoo practices grew as well did her desire for control. 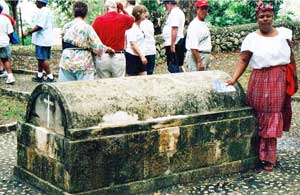 She consented to marry John Palmer, becoming the mistress of the great house in Jamaica.

But Annie Palmer was a hard woman to satisfy. Even though Rose Hall was a lucrative sugar plantation with an abundance of more than 2,000 slaves (which was considered a sign of great wealth), Annie still felt the need to turn to black magic voodoo practices as a means of manipulating those around her.

Apparently, as it has never been proven, Annie repeatedly had love affairs with her slaves, sometimes using secret passageways to her bedroom. If she wasn’t satisfied or simply became bored, she would kill them.

She ruled her domain using fear and cruelty; her power over the plantation was unmistakable.

The Witch is Dead

The story continues to say that Annie’s black magic powers continued to increase. Unfortunately for her, she murdered the intended son-in-law of her overseer, who was himself a practitioner of voodoo.

Through a combination of physical force and black magic, the overseer was able to get rid of Annie in her bedroom, but he did not survive the battle.

Even in death, her slaves were terrified the White Witch would use her powers from beyond the grave.

She was buried directly behind Rose Hall in a tomb designed to keep her there for eternity. A special voodoo ritual was designed and performed to ensure this would happen, but the legend says that the ritual was not fully completed, which allows the spirit of Annie to still walk the house and roam the plantation today.

Visitors to the Great House have seen Annie riding her horse at night on the plantation grounds looking for runaway slaves.

She has been seen standing on her balcony, still watching over the plantation even in death.

Many visitors discover unusual photographs after visiting – all reminders that the presence of Annie Palmer is still evident today.

Annie was once again immortalized in the 1970s by Johnny Cash in his song, the ‘Ballad of Annie Palmer.’

His words explored the possibility of a burial site on the Rose Hall estate when he asks: “Where’s your husband, Annie, where’s number two and three? Are they sleeping neath the palms by the Caribbean Sea?”

These tall tropical palms lazily sway in the ocean breezes near the beach below – a gentle reminder once again of the atrocious acts that are said to have been committed here.

Rose Hall had a few new owners after Annie’s death but the majestic Great House fell into ruins and was left abandoned for more than 125 years.

The grand 19th-century Georgian plantation home was saved and restored to its former beauty back in the 1960s by a former lieutenant governor of Delaware, John Rollins.

Care was taken to match the original style and furnishings of the home. One of the few original pieces of the home is said to be the ornately decorated mahogany mirror in Annie’s bedroom in which many guests have seen a reflection showing more than just themselves.

You can own your own piece of Rose Hall – if you dare. 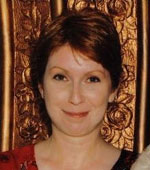 Connie Molz is a Certified Travel Consultant, freelance writer, and columnist. She is an avid traveler and mother of two who lives in southern British Columbia, Canada. She is also a Certified Pharmacy Technician and a volunteer for the Canadian Cancer Society.