Joe Wilkins has now accumulated more than half a century of experience in the wilds of northern Alaska since receiving training in arctic wilderness survival in 1966. During the 1970s he began hiking, backpacking and camping in the region which, in 1980, was officially designated Gates of the Arctic National Park.

A complex land of breathtaking contrasts, this frontier is exceptional –in no other region in North America does it get colder, darker, or wilder. Its remote beauty and extensive human history imbue the land with an elemental and visceral sense of inspiration for those who visit.

Gates of the Arctic National Park: Twelve Years of Wilderness Exploration provides thorough, accurate and detailed information about Gates of the Arctic National Park along with a collection of Wilkins’ own personal photographs. Wilkins has created a definitive, perennial book about one of the country’s most enchanting national parks that will stand the test of time.

Excerpt from the Bo

ok: Mother Bear with a Cub 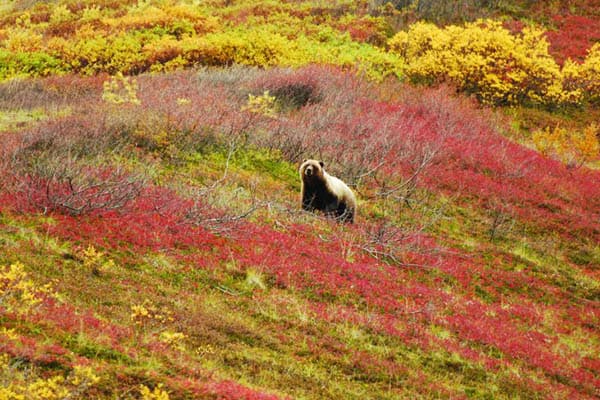 In addition to direct charges, mother bears are especially dangerous whenever their cubs are close at hand.

However, when care is taken, it is possible to witness some uniquely sensitive activities by bears.

Late one autumn afternoon, while backpacking through an especially remote portion of the boreal forest, I spotted a fairly large female bear just opposite me on an adjacent hillside.

She was across a small stream from my location, and a slight but steady and favorable wind was blowing toward me.

The bear was walking purposefully and seemed to be looking quite hard for something. The cub climbed onto its mother and began to nurse. It did not take much imagination to detect an expression of serenity on the face of the mother.

She would occasionally make a soft rumbling sound from deep in her throat that I could hear very clearly. It seemed to me to be a sound that revealed her satisfaction and contentment. It was an amazingly sensitive and gentle event that I was privileged to witness.

After observing the two bears for nearly a half-hour, I decided to quietly slip away in the opposite direction while the wind was still in my favor. If she had detected me, the mother could have reached me in a matter of seconds. Being many miles from the next human, I felt this surreptitious departure was well advised.

I remained quiet and out of sight while I began watching to see what might occur. The bear moved carefully through the relatively open area and carried out a meticulous search of the entire hillside. Finally, after circling around one location several times, she proceeded to sit down and look around.

When she would look in my general direction, even though the steady but slight wind was blowing toward me, I was concerned that she might detect my presence. She then began to make a sort of low “chuffing” sound that I had never previously heard a bear make. To my surprise, a cub burst out

of a growth of willows and alders and headed uphill. My surprise was partly caused by the fact that the cub had been much closer to me. Because of the heavy undergrowth, I had not detected it. By its size, I judged it to be a second-year cub.

To a degree that is almost unbelievable, the scenery of the remote arctic wilderness is breathtakingly beautiful. That scenery, however, contains hazards that may be deadly. Dangers include the rugged mountainous scenery itself, the changeable weather, and the white-water rivers.

Visitors must always prepare for and remain realistically cognizant of the risks encountered in the wilderness. Some of those dangers are from the animals who live there.

The charge of a grizzly bear is a loud, violent, and intimidating event. It can produce, in the subject of the charge, a release of adrenaline similar to that of hearing someone call “Incoming!” when under fire in combat.

Bear Awareness and avoidance are the best ways to minimize the dangers posed by grizzly bears. Visitors are urged to become well informed in this important subject area.

However, even when all appropriate care has been exercised, confrontations between bears and humans can occur. One day, as I was wading across a small stream, a male grizzly stepped out of the bushes a relatively short distance from me.

He and I saw each other simultaneously. He immediately charged me. Interpreting the overall body language of the bear, I decided he was making a defensive charge.

That quick decision gave me an opportunity to take the picture to the right. There are basically two reasons a grizzly bear charges a person.

In the case of the defensive charge, the bear probably also wants to see how an individual reacts or responds to its charge. If the person behaves in a manner the bear considers improper (such as retreating, appearing threatening, or showing fear), a defensive charge can quickly become a predatory charge.

With considerable experience, it may be possible for a person to read the overall body language of a bear and perhaps predict its intentions.

This includes carefully watching the hair on the back of the bear’s neck (whether or not it stands up), the movement of the ears and eyes, the snapping (or not) of the teeth, salivation (or lack of), the way the bear moves (stiff-legged or not), and the way the bear’s head is held, as well as the overall demeanor and behavior of the bear.

In an emergency situation, the analysis of this “bear body language” must be completed in the space of a couple of heartbeats.

When I took the picture on the following page, the charge resulted from an encounter that was a surprise to both the bear and to me.

In such a case, the bear may immediately start a charge with its head held low and its ears laid back, as this one did. This body configuration may change as the charge develops. In this charge, the bear quickly raised its head and its ears.

This change may have been partially because of the splashing water. Although the bear may not initially intend to physically come into contact with a person, there is always a considerable danger when faced by a charging bear.

I stood my ground and made myself look as big as possible while reciting the usual verbiage one exchanges with a bear in this situation (“Hey bear! Hey bear!”).

It worked, and the bear stopped a short distance from me and then rapidly departed. The bear seemed satisfied that it had made its point. In addition to my camera, I was carrying the standard-issue twelve-gauge shotgun loaded with three-inch magnum shells containing rifled slugs. I also carried bear spray, which is several times more potent than the spray used by law enforcement officers.

The National Park Service mandates that their personnel be trained and qualified in the use of these defensive weapons and to carry them whenever appropriate. In this instance, I determined it was not necessary to use either of them. On another occasion, I observed a grizzly make a conscious decision to firmly establish the boundaries of its territory by charging me. That time, I was day hiking alongside a small stream and saw a bear emerge from bushes on the opposite shore.

It quickly detected my presence—probably from my scent, as the wind was variable. It immediately dropped its head and commenced low growling while it began to noticeably walk “stiff-legged.”

Then, making a sharp pivot to its right, it began to charge directly toward me. I didn’t believe the bear was making a predatory charge because its complete body language was not overly aggressive, and I took several pictures as it crossed the river.

However, when the bear emerged from the river and started moving up the small hill toward me, I quickly put aside my camera and readied my “defensive weapons.”

As is the usual practice, I stood my ground, made myself look as big as possible, and began speaking in a firm, loud voice. Fortunately for both of us, the bear, at that point, decided it had sufficiently established the boundaries of its territory and made the point this was “his” river. I concurred, and we both continued happily on our mutual journeys.

Joe Wilkins: 50 years in the Arctic

Beginning with his training in arctic wilderness survival at Elmendorf AFB in 1966, Joe Wilkins has a 50-year span of experience in remote regions of arctic Alaska.

During the early 1970s, he was climbing and backpacking in the area which, in 1980, was designated Gates of the Arctic National Park.

Between 2005 and 2017, Wilkins made more than fifty trips into remote regions of the Brooks Range in and around this majestic park. Some of these were solo backpacking trips during which he also utilized canoes and packrafts to explore lakes and rivers.

During other trips, he served as a Volunteer Backcountry Patroller assisting the backcountry operations of the National Park Service in Gates of the Arctic National Park.

Wilkins made the decision to write Gates of the Arctic National Park: Twelve Years of Wilderness Exploration

while backpacking 675 miles on a pilgrimage through the Pyrenees Mountains along El Camino de Santiago from the Grotto at Lourdes, France to the Cathedral in Santiago, Spain.

In addition to his widespread backpacking experiences in Alaska, his climbing, hiking and backpacking explorations in North America extend throughout the entire range of the Rocky Mountains from the border of Mexico, through Alberta, British Columbia, the Yukon Territory and the Northwest Territories of Canada.