India: Exploring the World of the Mughal Empire in Delhi

It was a hot and humid summer day in August and I was standing in front of a mausoleum that could be considered more an opulent palace with its intricate marble borders and panels that were glowing in the bright sun.

My family and I were at Humayun’s Tomb, considered to be the inspiration for the Taj Mahal in Agra in India. We were on our annual trip to New Delhi visiting family and friends and at long last had managed to steal a few moments to do some sightseeing.

Even though I had lived in Delhi for some time, I had never seen this magnificent building before and so I was glad that at last, I was here.

New Delhi, the capital city of India, has seen many rulers and conquerors throughout its long history. Starting from when the city was first mentioned as Indraprastha (the first city of the seven cities of ancient Delhi) in the ancient Indian epic Mahabharata, Delhi as it was called in the earlier years, was the jewel city of many different dynasties.

Of particular importance is the Mughal Empire of India which began its reign in 1526 and which continued till the British ultimately seized power in 1760.

And so here I was at Humayan’s Tomb, built in 1569 by Humayun’s widow, Hamida Bano Begum, under the patronage of his illustrious son, Emperor Akbar. The construction finished in 1572. A UNESCO World Heritage site since 1993, the tomb is the earliest example of grand Mughal architecture in India.

This is where I saw for the first time that hallmark of Mughal design, the Persian charbagh style, or the practice of placing a building in the center of a quadrilateral form of four gardens with water channels representing the four rivers of Qoranic paradise. The iconic Taj Mahal would embody the zenith of this style about eighty years later. Entering through a massive gate, I found myself mesmerized by the sheer breadth and scale of the mausoleum.

The marble and red sandstone two-storied edifice stand on a platform, the lower part of which is a sequence of graceful arches that wraps around the perimeter of the structure. Humayun’s tomb does not just contain the grave of Humayun but is a resting place of a number of members of the royal family along with numerous other later Mughal emperors.

I found out that the tomb is also known as the “Dormitory of the Mughals” as the graves inside total over a hundred. Notwithstanding this morbid history, the place is serene, beautiful and magical.

The mausoleum is a perfect amalgamation of Persian architecture and Indian traditional design. This is best exemplified by the high white marble double dome in the Persian Islamic style being flanked by the distinctive domed canopies in the Indian tradition.

Although the complex is sprawling and filled with a variety of other monuments, due to the blisteringly hot weather, we had to be content with just visiting the main attraction.

The next day, continuing with the theme of visiting Mughal monuments, we ventured out to Old Delhi to see the Red Fort, another UNESCO World Heritage site. Lal Qila as it is known by the locals, this royal residence was built by Emperor Shah Jahan, the great-grandson of Emperor Humayun.

When Shah Jahan moved his capital from Agra to Delhi in 1638, he began the construction of Shahjahanabad, the seventh city of Delhi now known as Old Delhi.

He also laid the foundation for his citadel in 1639 and the Red Fort was completed about ten years later. The Delhi Red Fort remained the seat of the Mughal Empire and was also briefly held by the Marathas of Maharashtra till it went into British hands in 1803.

Bahadur Shah Zafar was the last Mughal emperor to be in the fort and was the face of the 1857 Indian Mutiny. Consequently, after the failed uprising he was arrested by the British and exiled to Rangoon, now Yangon, in Myanmar.

Although the Yamuna River has receded far, far away, the Red Fort was originally situated on the banks of this river and is surrounded by a deep moat. There are two main gates into the fort, the Delhi Gate, and the gate through which we entered, the Lahori Gate named so because it leads to the city of Lahore, now in Pakistan.

For Indians, this gate also holds a special place in their hearts as from the first Independence Day of India on 15th August 1947, when India declared independence from British rule, all Prime Ministers have raised the flag from here and given an address to the nation.

The tradition originated with Jawaharlal Nehru, the first Prime Minister of the sovereign nation who gave his famous speech known as “Tryst with Destiny”.

On The Palace Grounds

As per Mughal norms, the fort is constructed of red sandstone but all the palaces inside are made of marble. On this sweltering day, the grounds were teeming with tourists, both local and foreign as this place is a huge attraction for Indians from across the country. We too started off towards the Diwan-i-Am or the Hall of Public Audience, a rectangular hall with a façade of nine arches.

Inside at the back of the hall, I saw an alcove that held the gigantic marble throne of the emperor where he would sit to listen to the grievances of his people. Today the throne is covered in netting to prevent it from being touched by the thousands of visitors who pass through this space in a day.

Across the pathways and lawns stood the Diwan-i-Khas or the Hall of Private Audience, a marvelously ornamented pillared hall in marble with arches and a flat ceiling. The lower portion of the pillars was beautifully carved in floral pietra dura and the upper portions were all gilded and decorated.

Sadly, we were unable to take a tour inside as the whole pavilion was cordoned off. It is said that Shah Jahan’s famed Peacock Throne was placed here before it was looted and carried away in 1739 by the Persian ruler Nadir Shah.

Next to the Diwan-i-Khas are the Moti Masjid and the Hammams, neither of which we could enter as they were closed to the public at the time of our visit. We had to satisfy ourselves by reading the information leaflet. The small but exquisite white marble Moti Masjid (pearl mosque) was built in 1660 by Shah Jahan’s son Aurangzeb for his personal use.

Next to it are the buildings of the hammams or bathhouses, again built in white marble. I found the hammams to be quite an imposing structure; three buildings that seemed to be connected to each other through corridors.

We spent some time walking through the well-kept gardens and came upon a smallish red sandstone arched pavilion that stood in the center of what seemed to be a large tank. This was Zafar Mahal, built by Bahadur Shah Zafar in 1842.

Undoubtedly, it would be filled with water as it was connected to the causeways that crisscrossed the garden and I could imagine the bygone periods when all these channels would have water running through them thereby cooling the temperature considerably in the hot months.

Now the channels were dry and the heat was tremendous and we decided to turn back and head home with a promise of returning back in agreeable weather so we could do more justice to our visit.

We did not have sufficient time but certainly, there are other important Mughal era buildings in New Delhi that are definitely worth a visit.

Jama Masjid located near the Red Fort again built in red sandstone and white marble in 1644 by Emperor Shah Jahan is the largest mosque in India.

This final architectural structure by Shah Jahan is a commanding edifice that stands on a sprawling stone platform that can hold about 25000 people at prayer times.

Chandni Chowk, one of the oldest markets in India is a warren of streets filled with shops selling clothes, food, books and all varieties of consumer goods. The market starts at Lahori Gate of the Red Fort and is famous for shops that trace its lineage to the Mughal era. Originally designed by Shah Jahan’s daughter, Jahanara Begum, the market has a storied history.

Jantar Mantar, located near Connaught Place in New Delhi is an astronomical observatory built in 1724 by Sawai Jai Singh II, the Maharaja of Jaipur who was also a noble in the Mughal Court of Muhammad Shah. It was one of five observatories that he built in Northern India.

Purana Qila, or Old Fort also in New Delhi was built by Humayun in 1538 and was the base for the sixth city of Delhi. Parts of this fort was built by Sher Shah Suri who had overthrown Humayun for fifteen years. In this fort is the library where Humayun died after falling down its stairs.

A Bite to Eat

All this sightseeing can and will most surely whip up your appetite. Fortunately, there are no dearth of restaurants and eating joints in New and Old Delhi to suit diverse budgets. If you decide to eat in Chandni Chowk, these are great places to have an authentic experience:

Karim’s: Located near Jama Masjid, this is a legendary Mughlai restaurant of Old Delhi, established in 1913. Go here for the varieties of kebabs and biryani, all uniformly mouthwatering and delicious.

Paranthe Wali Gali: This is not a restaurant but a street with some very old eateries, the alleyway of parantha or the Indian fried and stuffed flatbread.

If you find heavy crowds intimidating, or its just mind-numbingly hot like it was when we went, a better option would be to try out the restaurants in Connaught Place which is near Jantar Mantar. You would still be able to experience authentic Mughlai cuisine but in greatly comfortable surroundings.

For more information, visit these websites: 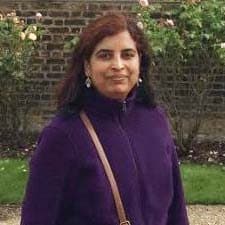 Susmita Sengupta is a freelance writer who loves to travel. She and her family have traveled to various parts of the USA, Canada, Europe, the Caribbean, Middle East, Southeast Asia and India. She lives in New York City with her family.