A Photographers Guide to Pulikali Festival in Kerala, India

One of my friends from Chennai who had shot Pulikali Festival always told me about the fun and culture related to it.

As I have shot many festivals across India Pulikali was always back of my mind. I finally made it to Pulikali, and here is a guide for photographers of this incredible spectacle.

Pulikali or Kaduvaakali’ Play of the Tigers’ is annually celebrated in Kerala, India, on the 4th day of Onam which is a 200-year-old folk dance form. Onam. It is the most important festival of Kerala which is the Harvest Festival.

Pulikali involves the performing of colorful dances and is mainly staged in the Thrissur and Palghat Districts. The dancers are dressed up and painted depicted as Tigers, and the performance revolves around the theme of tiger hunting.

The performers dance to the beats of drum percussions like Udukku, Thakil which are traditional instruments and many other instruments.

Mainly in Thrissur and Palghat District

How to Get There?

Thrissur does not have its own airport but the nearest airport to this place is the Cochin Airport which is approximately 55 km away and another airport which is at Kozhikode, around 80 kilometers.

Thrissur railway station is well connected with all the major cities of India.

Thrissur is also well connected by road and can experience a combination of bumpy rides and expressways. In the last few years, the scenario has changed and all the National highways have become smooth and there are now new expressways as well.

I had lined up my tour starting from Kumarakom, Kottayam. I reached Thrissur around 10 pm at night and got an auto to reach my Hotel at Swaraj, which is also the place where Pulikali is performed.

As Thrissur is a city near Cochin and is a well-traveled destination so you would have a lot of options to stay from economical for solo travelers to luxurious 5 stars.

How are the Bodies Painted?

The attraction of this folk art is the colorful appearance of the performers and masks. A combination of tempura powder and varnish is used to make the paint.

The first step is to remove all the hair from the body, after that the base coat of paints is applied which takes at least two hours to dry.

After that, the second coat of paint is applied with an enhanced design. This entire procedure takes at least five to seven hours.

A large number of artists gather to apply paint to the participants. Anybody can participate on prior notice, people are from various walks of life including drivers, hoteliers or government officers are all welcome and they do it for fun.

These artists are specialized and have been doing it for years and passed on from generations so have mastery in their Art. Painting is done at seven different locations, as accommodating a huge group of participants and finishing the job on time won’t be possible. Most of the locations are schools around Swaraj round and the process starts the night before.

I also came across floats on my way which were decorated for the procession and places where masks and other decorative items for floats were prepared. While the time I was going to different locations to shoot, know, and understand more about the festival I took out some time to eat at Pathan’s Restaurant which is a well-known place in Thrissur.

Places to eat in Kerala

These are the best places to eat but there are a lot of other options as well.

By late afternoon all the participants were ready and started moving from all the different locations towards Swaraj Round. Dancing to the beats near the school, the procession started by breaking the coconut outside the local temple.

As the participants started dancing to the beats of Udukku, Thakil people already waiting for the procession on their terraces, out their windows, wherever they got a place started to cheer and whistle as the procession made its way through the narrow lane.

Once near the Swaraj round all the other groups with Floats, Udukku, Thakil, and other instruments from different location Merge together to head toward the Vadakkunnanthan Temple.

Once the body painting is finished, the Pulikali groups or ‘sangams’, from all corners of the districts assemble to display their skills, Around 800 participants are surrounded by thousands of spectators. Join the festivals by cheering.

The groups assemble in front of the Vadakkunnanthan temple and offer a coconut to Naduvilal Ganapathi Kovil, after that procession continues around the Circle, dancing, jumping sound especially of jiggles tied around the waist is fun to hear as they move the belly on the beats of the drums through the streets.

The groups assemble in front of the Vadakkunnanthan temple and offer a coconut to Naduvilal Ganapathi Kovil, after that procession continues around the Circle, dancing, jumping sound especially of jiggles tied around the waist is fun to hear as they move the belly on the beats of the drums through the streets.

Accompanied by huge floats of various themes scenes such as the tiger preying on an animal, and a tiger being hunted by a hunter is enacted supported by the huge crowd standing on walls, trees, buildings, houses. The crowd can be seen cheering, shouting, clapping and dancing to the beat of the loud music.

Things to Keep in Mind?

* Know the dates prior from Kerala Tourism Website as dates shift every year but are on the 4th day of Onam.

* If Travelling by Rail book tickets well in advance. O Onam is an important festival of Kerala so a  lot of people head home for holidays. Getting a ticket in Tatkal can be a task and airfare can be expensive.

* As body painting starts in the night when the first layer is applied, photographing won’t be much fun for the second layer you can start by 8 am in the morning.

* Body painting happens at seven different locations around Swaraj round circle some in schools or community places you need to find the locations on arrival any local can help you with that.

* Access to some places can be difficult to reach early in the morning before local media and committee members would deny entry if it’s too crowded.

* Even if you get entry it can be for a short period of time at some places as rooms can become chaotic and artists can get disturbed so organizers can get upset.

* The procession leaves from their respective places around 4 pm and meets at Swaraj Round around 5.30 pm at Vadakkunnanthan temple.

* Follow any one group from the place they start as you could get to understand the process as well and anyways all the group joins at Swaraj round.

* Take care of your baggage and self as any festival in India it’s going to be chaotic and crowded. Keep your passport and valuables in your hotel room safe.

* Talk to an Artist performing after painting, they come from all walks of life and have an interesting story to share.

* True participation can be when you show some moves as local does by joining performers so have fun, dance, scream, tap to beats. 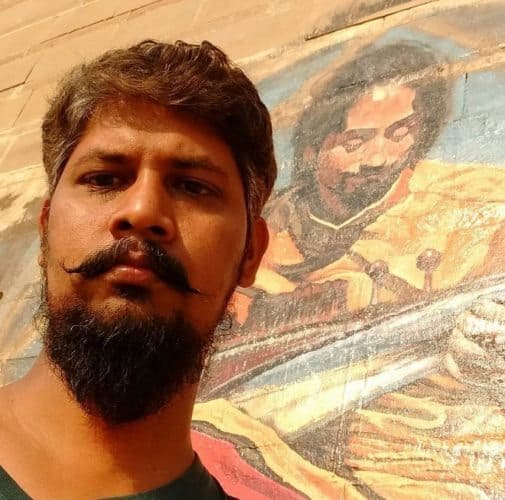 Sandeep Rasal is an independent Artist, Photographer, and Filmmaker from Mumbai, India.