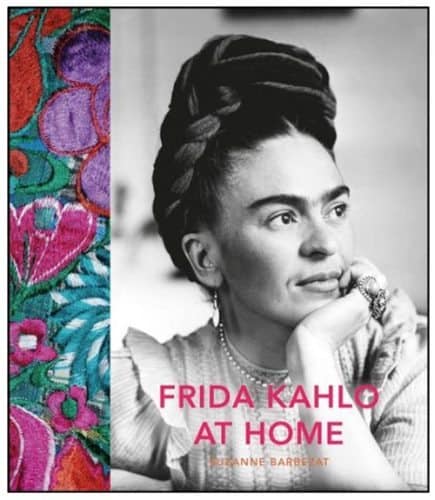 La Casa Azul, now one of the most visited museums in Mexico City, was the birthplace of the artist Frida Kahlo.

It was the home where she grew up, where she lived with her husband Diego Rivera, and where she died.

She also spent significant periods of time in the house convalescing, first when she contracted polio as a small child and again at the age of 18, after the trolley accident which left her critically injured.

Confined to her bed in casts and orthopedic devices and in constant pain, the bedroom at La Casa Azul is where Frida began to paint the vibrant and unflinching portraits and self-portraits that would make her name.

features the artist’s paintings along with archive images and family photographs, objects, and artifacts from her personal collections, and photographs of the surrounding landscape to provide an insight into how these places shaped this much-loved artist and the legacy of her most compelling, disturbing, and beautiful work.

Excerpt from the Book: Frida and Diego in San Francisco

Frida traveled outside of Mexico for the first time in 1930. She had wanted to travel since her schoolgirl days and was excited to be venturing so far from home.

Escaping the political repression of the Maximato in Mexico, which was increasingly intolerant of the left, she and Diego arrived in a United States that was in the grips of the Great Depression and Prohibition.

Diego had wanted to go to the United States for quite some time. He was fascinated with technology and machinery and he felt the future was there. The United States did not hold the fascination for Frida that it held for her husband. Ultimately, living outside of Mexico gave her a deeper appreciation of her home country.

They arrived in San Francisco in November. Sculptor Ralph Stackpole, a friend of Diego’s, made the arrangements for Diego to paint two murals, one in the Luncheon Club of the San Francisco Stock Exchange in the financial district on Pine and Sansome Streets, and another in the California School of Fine Arts on Chestnut Street.

Architect Timothy Pflueger had designed the new stock market building; he believed that art should be an integral part of a building, so he hired various artists to decorate it. Stackpole was creating sculptures for the front entrance and had recommended Diego for the job of painting a mural on the staircase.

There was some public outcry that Rivera had been hired: many felt the commission should have gone to a local artist. Most agreed that it was a strange choice to hire a communist artist to create a mural in a capitalist institution. However, Diego and Frida were well received in general and were invited to luncheons, receptions, and parties.

Frida and Diego stayed in Stackpole’s studio at 716 Montgomery Street in an area that harbored a flourishing artists’ colony. The building, sometimes referred to as the “Ship Building” because it was built from the hull of a schooner, housed several artists’ studios. It was located just a block away from the Montgomery Block building, another haven for artists and bohemians that was affectionately referred to as “Monkey Block.” They made many friends among the local artist community.

Frida had been reading in English since preparatory school, and often peppered her letters to friends with words in English and German, as well as words of her own invention. Upon her arrival in the United States, she applied herself to mastering the language.

In a letter she wrote to her father shortly after they were installed in San Francisco, she reported: “I’m learning a little English every day and at least I can understand the basics, buying in shops, et cetera.”

It was not long before she was writing letters in English. Diego — who spoke French fluently, having lived in France for many years — never put any effort into perfecting his English. Frida often acted as his translator and secretary.

When Frida started wearing traditional Mexican clothing following her marriage, she began with an item or two: a rebozo, a jade bead necklace, a peasant blouse. She now donned full indigenous attire, causing a sensation in the United States.

When photographer Edward Weston met her for the first time, he wrote in his diary: “. . . she is in sharp contrast to Lupe, petite, a little doll alongside Diego, but a doll in size only, for she is strong and quite beautiful, shows very little of her father’s German blood.

Dressed in native costume even to huaraches, she causes much excitement on the streets of San Francisco. People stop in their tracks to look in wonder.” Frida was aware of the impression that she made and relished it.

Diego wanted to get a feel for the place before beginning his mural, so they began their stay by exploring the city together. They visited various sites in and around San Francisco, and made a trip 50 miles north to Santa Rosa, to visit the home of Luther Burbank, the noted horticulturist who created hundreds of fruit and vegetable hybrids. Burbank had died five years earlier, and at his request, was buried on his property under the shade of a cedar of Lebanon tree that he had planted from a seed. He said: “I would like to know that the strength of my body is going into the strength of a tree.”

The visit made an impression on both artists. Diego included Burbank in his mural Allegory of California, showing him pollinating a plant. Frida chose to depict the horticulturist in a much more original manner, showing how Burbank’s essence was deeply embedded in the plants to which he devoted his life.

Her painting perfectly illustrates Burbank’s wish that his strength feed into a tree. In her depiction, the man who made plant hybrids is a hybrid himself, and he lives on in the spirit of the tree. This painting marked a shift in Frida’s art: instead of a true-to-life portrait, the symbolism reflects the deeper truth as she saw it. With this work she was also beginning to explore themes of the life cycle and hybridity.

While Diego worked, Frida continued to explore the city. She shopped, visited museums, and got to know Chinatown. She wrote to her childhood friend Isabel Campos: “The city and bay are overwhelming. . . it did make sense to come here because it opened my eyes and I have seen an enormous number of new and beautiful things.”

Near the end of their stay, Frida painted a portrait of herself, and Diego loosely modeled on their wedding portrait. The painting is executed in a folkloric style. She wears a green dress and a red rebozo. Her head is tilted, her usually severe gaze uncharacteristically soft. Just the tips of her shoes peek out from the bottom of her full skirt, and she seems to float, grounded only by her husband’s hand that is joined with hers in a light clasp. She is diminutive and dainty by her husband’s side.

The master of monumental works is monumental himself here, with legs like tree trunks, his enormous workman’s boots set in a wide stance. He holds his painter’s palette in his right hand, defining him by his work. In the upper section, a banner reads: “Here you see us, me, Frieda Kahlo, with my beloved husband Diego Rivera. I painted these portraits in the beautiful city of San Francisco California for our friend Mr. Albert Bender, and it was in the month of April of the year 1931” The painting contains a double message: although in the image she depicts herself simply as the wife of the great painter, the text makes it clear that she was the artist of this work.

Diego would have liked to stay in the United States, but the Mexican president was pressuring him to return and finish his mural in the National Palace. Diego put off their return as long as possible, but when he had finished the mural in the art school at the beginning of June, it was time to head back to Mexico City. 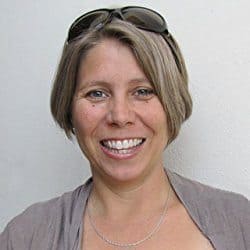 Suzanne Barbezat is a travel writer based in Oaxaca, Mexico. She has worked as a teacher, tour guide, and writer and holds a bachelor’s degree in Anthropology from McGill University, Montreal.