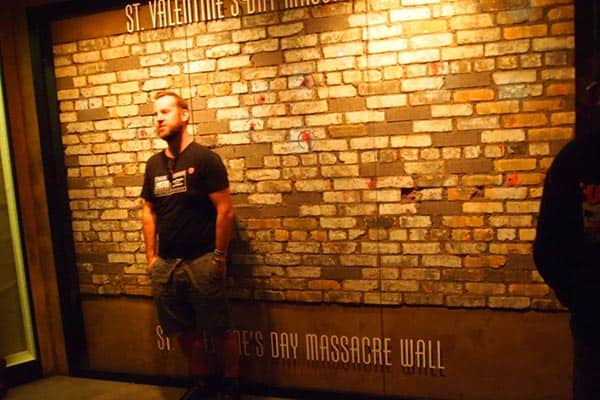 Yesterday we had a true mob doubleheader here in fabulous Las Vegas.  First, we spent two hours discovering more than anyone could ever possibly need to know about organized crime, those who did the deeds and those who spent their careers capturing the bad guys.

A true smorgasbord of grisly facts about life as a mobster and as a G-man. At the Mob Museum, or National Museum of Organized Crime & Law Enforcement, located in a former courthouse and post office building, the tour takes you through room after room with both videos, floor to ceiling photos, and a look at both sides of the crime.

The building was once the setting for the Senate’s Las Vegas Kefauver hearings in 1950, where mafia boss Frank Costello famously told the senators he was done and walked out on the hearings after too many questions.

So where did many of Vegas’ Rat Pack and movie stars like to enjoy a steak?  For 58 years, that’s been the Golden Steer, and there we met Mark Steele who runs the place with his family.

With comfy round leather booths designated for celebrities who claim them when they’re in town, like Mario Andretti, Nicholas Cage, and Bette Midler, we dined the way the famous do….big shared caesar salad, petit filet mignons (as perfectly cooked as I’ve ever had!) and their signature cocktails.

The staff, in black tuxes and ties, were gracious and eager to share the stories that 58 years on the strip provide. At about $120 per person, it’s not cheap–but neither are the clients who come back to this famous steakhouse whenever they’re in town.