Montserrat: 20 Years After the Volcano

After the 1997 Eruption of the Soufriere Hills Volcano, it’s still an island divided

All these years later, Plymouth, a charming colonial town on the southeastern coast of Montserrat, is still the official capital.  It had a deep port that could accommodate cruise ships, colorful shops, schools, homes and streets linedwith thriving businesses. The local airport had a long landing strip that could handle modern jets. Today it’s a desolate landscape.

Plymouth is a ghost town the color of ash grey. That’s the exact color of the sticky lava, sludge and gigantic boulders that hurled down the mountainside nearly 20 years ago when the Soufriere Hills Volcano awakened from three centuries of dormancy.

Chimneys and rooftops are scattered on the ground like toys left on a playground. The war memorial, one of Montserrat’s most treasured structures, is gone, nothing but its cupola and clock protruding above ground.  The volcano sits in the background, surveying everything in the southern part of the island…everything it destroyed.

The damage was caused by a series of eruptions beginning in 1996. The situation was deemed so severe that the city was evacuated.

The following year on June 25, 1997 the definitive and most damaging eruption caused mudslides, boulders and pyrocrastic flows barreling down the mountain, burning and interring everything in its path.

Some call it a modern day Pompeii but to the locals it’s still fresh in their minds and hearts.  “I’m sorry….I’m sorry” says my guide, Rose Willock, as her eyes fill with tears in response to my questions about life in Plymouth before the volcano.

It’s a fresh wound for her and all the Montserratians who lost everything. Embedded in the 40 feet of destructive mud and ash are the homes, animals and possessions of countless people whose lives were interrupted and destroyed.  Miraculously only 19 lives were lost thanks to the evacuation.

The exclusion zone was off  limits until recently. It was forbidden to enter, let alone live there. Today, however, when volcanic activity is low, researchers and tourists are allowed in during daylight hours. Garibaldi Hill is a good vantage point to see Plymouth from above. And Jack Boy Hill gives an eerie view of the original airport which is now a lonely expanse of grey desolation.

Volcanic activity is continuously monitored by The Montserrat Volcanic Observatory http://mvoms.org/, a must-see for your visit to the Montserrat. The small facility looks out on the still-active volcano and provides regular updates to the government about anything that may indicate an eruption. We’re told to not even think about hiking there for it’s far too dangerous, even for the scientists.

The dome is usually cloud covered and inaccessible as 350 tons of sulphur dioxide are spewed forth each day. The observatory’s viewing deck is the safest place from which to view this volcano, the most active in the Caribbean.   The observatory’s Facebook page is updated regularly with interesting details about their research. I find myself checking it regularly as I’m haunted by the aftermath I saw.

Before and after photos of Plymouth are on display at the Monserrat National Trust www.montserratnationaltrust.ms  headquarters in Olveston. There’s also a scale model of the city to give visitors a sense of just how much has been lost. A small botanical garden surrounds the building and inside are display spaces where, on a recent December day, I learned about the island’s history of slavery, abolished in 1834.

Many of those slaves had come from Ireland which begins to explain why Montserrat celebrates St Patrick’s Day, March 17th, as a national holiday each year. It also is the reason my passport has a shamrock stamp from Montserrat. The Trust’s mission is vast:  to document and preserve the island’s history, including plant life, crafts history and the national bird, the oriole.

Montserrat has lived through a series of disasters including an 1834 earthquake that destroyed parts of Plymouth, mud flows and collapse of the volcano’s dome  in 1997 and an ash eruption in 2007. Hurricane Hugo damaged virtually every building on the island. Today the rebuilding is concentrated  on the northern half of the island which is largely out of the volcano’s reach.

The population had declined from 12,000 to 2,000 following the eruptions and today is just shy of 5,000 as many who chose to leave the island are returning. Brades has become the de facto center of government while Little Bay, home to sugar and cotton plantations in the 18th century, has been completely constructed in the last 20 years.

Passengers are ferried from cruise ships that sit out in the harbor. Trucks carry the island’s main exports: pumice, sand and gravel, to and fro. Modern office buildings sit atop a hill with a million dollar view of the sea. Restaurants, banks, churches are all active. What you won’t see are chain resorts, casinos or duty free shopping. There’s not even a traffic light on the island! Montserrat is a Caribbean for outdoors, for naturalists, for walking and hiking and dining with the locals.

If you’re a hiker you’ll want to meet Scriber, www.scriberadventures.com, Montserrat’s resident naturalist with a passion for hiking, bird watching, and  local flora. We set out from the community of Little Bay, into the gently sloping hills, stopping when he points out plants with medicinal uses or birds nesting above our heads.

He knows where the wild donkeys graze and which beaches are favorite turtle nesting spots. The landscape is raw and captivating, beautiful for the ochre yellows of the grasses and the crisp blue sky.

Because of time limitations our hike is only a couple of hours and ends with a special treat. We wind down a rocky path to beautiful and secluded Rendezvous Beach where I meet Veta Wade, certified reef inspector, whose passion for the island immediately envelops me.

“Montserrat is quite an exciting place to live as we are in the process of a total redevelopment,” says Veta, vivacious go-getter with a million dollar smile. “I have the opportunity to be a part of that.”

She returned after 13 years in England and is playing an important role in development and education with AQUA Montserrat, www.aquamontserrat.com, her dream come true. She will customize off the grid tours, whether it be beginner or advanced snorkeling, lion fish hunting, reef research, or preparing lion fish for a beach barbecue. She also provides education and appreciation training for the island’s youngsters.

We don our gear and she leads me to the pristine reefs she knows so well. We see parrot fish, blue tangs, lion fish, and more. The water is warm enough on this early December day so no wetsuit is needed.

“I love my island’s resilience, perseverance, and faith.  All within one of the most naturally beautiful places on earth.” continues Veta. “It’s real Caribbean living.”  She’s right about that….and I hope the dedicated people I met will succeed in keeping it as raw and naturally beautiful as I found it in December, 2015.

Watermelon Cottage  elegant, romantic dining in a charming setting with an Asian ambience. Each meal is individually prepared and the options are creative and absolutely memorable! Reservations required.

Olveston House www.olvestonhouse.com  is the home of George Martin. Yes, THE George Martin, producer of the Beatles music. The fab four surely passed many hours in this home, evidenced by the photos on the walls. When he isn’t there, the home is used as a guest house.  First class dining on premises.

Watermelon Cottage,  (see my notes on the restaurant),  also has one room available in  a very unique setting. The owner, Trevor Stephenson, has lived on the island 39 years and is an informative and entertaining host.

Guest houses and villa rentals are popular options for lodging.

The tourism board is an excellent resource for a complete listof villa rental agents and car rental companies. They can also put you in touch with many of the parties mentioned in this article: www.visitmontserrat.com 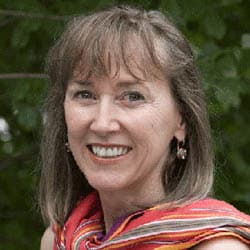 Cindy Bigras is GoNOMAD’s expert on all things Italian, but she shows the same enthusiasm for Sweden or Austria or Virginia, or wherever else she decides to go. Cindy grew up in Vermont and studied and worked in Florence, Italy, for three years. It was there that her love for all things Italian was born.