The Sound of Good Fat: Macadamia Nuts in Guatemala

Growing Macadamia Nuts: An Excerpt from Breakfast for Alligators: The Sound of Good Fat

Excerpted from Breakfast for Alligators: Quests, Showdowns, and Revelations in the Americas 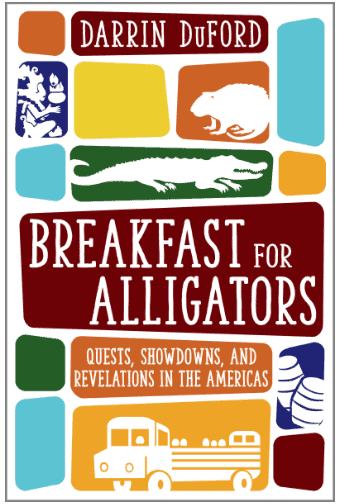 A sharp-shooting SWAT team, a Venezuelan producer of alcoholic love potions, and an audacious subway rat are among the cast of characters award-winning author Darrin DuFord encounters in Breakfast for Alligators: Quests, Showdowns, and Revelations in the Americas

Through such mediums as public transit, cuisine, urban wildlife, and music, DuFord (author of Is There a Hole in the Boat? Tales of Travel in Panama Without a Car, 2007 Lowell Thomas Travel Journalism Awards silver medalist) searched for peculiar but telling stories around the Western Hemisphere to gain an understanding of the societies he encountered.

The result is a collection of insightful pieces that expose the desires and realities shaping landscapes from Chile to Canada. From surviving a journey in a homemade submarine off the coast of Honduras to receiving a lesson in aging from the street art of Valparaiso, Chile, DuFord’s lively narratives show how travel has the ability to illuminate cultures while unleashing their bottomless complexities.

The tropical sun could no longer reach me. I had fallen into nut therapy.

I was not following a nouveau spa trend, although I would not be surprised if owners of such establishments take note. I was sitting in the shade of a macadamia orchard in the Guatemalan highlands, listening to ripe nuts falling onto the ground.

Each time a breeze rolled down the cones of the encircling volcanoes and teased the treetops, I absorbed the vibrations of a warm thump from somewhere—another nut’s fall broken by soft, dark soil. Nature’s tom-toms, soloing over a woodlands jam session. Improvisation for wind and branch.

No beach for Him

Some people flock to the beaches to listen to the swish of the surf to relax. Others may seek the sweet jibber-jabber of birds. I stumbled upon a like-minded yet less-celebrated source just a short bus ride from the buzz of Antigua, Guatemala’s most visited city.

I had been ready to interview Lawrence Gottschamer, the founder of the organic macadamia orchard known as the Valhalla Experimental Station—a farm that gives macadamia seedlings to the indigenous people of Guatemala as an alternative to unsustainable farming practices—when the magnetic patter of ripeness struck.

“You have to make a mess of this,” remarked Lawrence, his silver beard quivering, his fingers twirling in a playful swat. The words snapped me back to the table and drew my focus toward a plate of pancakes in front of me. A neat zigzagging of macadamia nut butter topped the pancakes and begged for the uncouth kind of christening that Lawrence recommended.

Lawrence was never one for pandering to conventionalism anyway. The existence of a thriving crop of macadamia trees in the middle of Guatemala—halfway around the planet from the tree’s origins in Australia—demonstrates the success of his creative methods. Over thirty years ago, he was recruited to assist in finding a way to grow macadamia trees in Costa Rica. He had served in Vietnam and had been retired in the line of duty as a fireman when he was tapped. “The word ‘no’ is not big in the fireman’s vocabulary,” he explained. “The requirements were that I had no experience with macadamias and no Spanish.”

He made his first discovery shortly after he was told that growing macadamia trees at sea level in the tropics was impossible.

He walked into the jungle to relieve himself and came close to watering a soaring macadamia tree growing in the wild. No one knows how the tree got there. The nuts float, so it’s possible one had washed up from across the Pacific.

Narrating between mouthfuls of his own blissfully sloppy pancakes, he recounted moving to Guatemala in 1976, where he took note of the devastation caused by slash-and-burn farming—desiccated landscapes that can no longer support crops.

He then inherited forty years’ worth of macadamia research from California botanists and started breeding trees that have been naturally adapting to Guatemala’s mountainous, volcanic soil. He has been cultivating his own varied stock of seeds since.

Conventional wisdom also claimed that farmers needed to graft their macadamia trees. Grafting requires cutting shoots from a master tree and grafting them onto a rootstock of a different variety, resulting in all trees being genetically identical since the rootstock’s genes don’t reach up to the fruit.

Yet we sat among 300 macadamia trees, all of which were grown from the farm’s own seeds without grafting. “Every tree is different,” Lawrence remarked.

He explained why we should care whether the trees are clones or not. Clones produce uniformly sized nuts, easier for a machine to harvest, and they are bred to have high yields. The problem comes when the blight comes. A crop containing a single variety of a plant—a practice called monoculture—can be wiped out by a single blight. Just ask the Irish, whose use of monoculture contributed to their nineteenth-century potato famine.

The United Nations Food and Agriculture Organization estimates that seventy-five percent of our food crop’s genetic diversity has been eliminated in the past century. “It’s genetic suicide,” Lawrence spat. I tend to believe that innately; we understand the importance of genetic diversity because if we didn’t, we’d all be marrying our siblings. Anyone up for more royal hemophiliacs?

To make up for a monoculture crop’s inability to defend itself, farmers hose it down with pesticides and fungicides, effectively killing the soil and requiring the addition of chemical-based fertilizer.

Some insects nonetheless “resist the spraying and survive, and then become congresspeople,” Lawrence commented.

No need for Chemicals

Diverse crops not only survive in soil rich in microbes and fungi, they can thrive in it—without the need for chemical fertilizer that can end up polluting rivers with their runoff. Such moist, clumpy, living, bustling soil also becomes its own defense against wind erosion. And it provides an uncannily tuned drumhead in the company of falling nuts.

Since Valhalla has been giving away free seedlings to Guatemalan farmers, I wondered how many of those farmers were also enjoying pancakes with macadamia butter from their own harvests. “In one village, for example,” explained Lawrence, “I gave away seedlings to twenty-five families.

Twenty-four were failures. One family has a thriving orchard and sells nuts to the others.” I had already noticed that baskets of the nuts have been turning up in markets around the country alongside the usual Guatemalan fare of chicken feet and tamales, although macadamia pancakes still have a long way to go to dethrone gallo en chicha (rooster in a thick sauce made from fruit wine) as the special of the day.

“Have you gotten the tour yet?” Lawrence asked, waving me to join him for a walk toward an open-sided structure that buzzed with the nasally whirl of a motor.

“You’re gonna like this.” A cloud of debris circled the building. One of the farmers was pouring ripe macadamias, still with their green husks, into a rebar track around a wheel taken from a truck.

The tire, bald and spinning in a furious blur—long since retired from navigating landslides along Guatemalan highways—gripped the nuts, violently ripped off their husks against the track, and shot the recognizable hard shells, brown and round, onto a collecting table. What was that sweet gas smell? Aha—a lawnmower engine powered the wheel.

Tracing the path of the nuts through the dehusker, I felt the same consuming fascination as when I used to follow the metal ball through the mismatched pieces of the Mouse Trap board game as a child.

And that’s when I began to appreciate the simplicity of the device. The ranch built the dehusker out of scraps commonly found around any farm in Guatemala. That was the intent—to show farmers that they can build one too.

“Look at all the sizes,” he shouted over the clanking, his eyes wide and hovering. He brushed his fingers through the table’s nuts, ranging in diameter from cherries to ping-pong balls.

With hundreds of shells rolling around before me, I considered the many impacts of the farm. Besides my newly found percussive source of solace, the nuts carry the advantage of providing a farmer with a year-round food source, giving welcome stability in a country that had emerged from a devastating civil war in 1996.

When a farmer only grows coffee (a common practice in Central America), the beans can’t be eaten if their price drops. Macadamias, more than just an indulgent snack with a velvety crunch, provide protein and omegas. Most of the fats are monounsaturated in a higher proportion than even olive oil.

I stepped over a layer of scattered husks while sweet echoes of the macadamia butter’s richness still rippled on my tongue, still pampered my consciousness. I reflected on how such a treat could be so beneficial. With tragic frequency, foods that agree with one’s health or the health of the environment may not be so agreeable to the palate.

The gullets of the health-conscious often have to reckon with flavor-free rice cakes, or dumpster-scented noni juice, or multigrain muffins suspiciously reminiscent of old wood chips.

While the nut harvests provide food and income for farmers across Guatemala (augmented by Valhalla’s aim to buy as many nuts from the farmers as it can), it’s the nut’s oil that has attracted international attention. Lancôme, a Paris-based cosmetics company, uses an extract from Valhalla’s nuts as the active ingredient in their anti-aging treatment. “The process of extraction is so secret, it’s not even patented,” Lawrence gloated.

That’s because he possesses a more effective safeguarding of his intellectual property than what a piece of paper can provide: he made sure to mention to me that Valhalla’s machete-brandishing farmer who performs the extraction process is equally skilled in relieving trespassers of their scrotums.

Picking up the anti-aging oil at the gift counter, I wondered how many castrated spies went into the making of each bottle. Less mysterious but just as important in showcasing the crop’s versatility were chocolate-covered macadamias, bars of macadamia oil soap, and bottles of the aforementioned macadamia nut butter, all packaged with the mantra “Hagamos del Planeta Tierra nuestra iglesia y protegerlo nuestra religion” (Let’s make planet earth our church, and protecting it will be our religion).

While his son Ricardo explained the benefits of sustainable agriculture to a group of tourists, Lawrence pulled me aside and said, “I shouldn’t be in business. This project is a response to problems. The idea is to transfer the technology to the local people.”

They were humble words coming from the world’s leading experts in sustainable macadamia farming.

They were words that sounded as enchanting as the song of an edible orchestra. Lawrence seemed to know this already because he pointed out several molded basins dug into a hillside that looks out onto Guatemala’s wavy spine; the construction work is part of an outdoor hot tub he is building in the middle of his orchard, where the ambient beats are always dialed in.

Buy this book on Amazon Breakfast for Alligators: Quests, Showdowns, and Revelations in the Americas