Walking Across The Rooftop of Africa: Sanetti Plateau, Ethiopia

My friend Gurbinder (Binder) was role-playing scenes between the Jafar the evil vizier and his talking parrot Iago from the Disney cartoon Aladdin. These had instigated such a fit of laugher in me that I could barely walk.

The fact that we were at that moment trekking across the wilds of the highest plateau on the African continent just seemed to make the whole thing funnier.

Our guide, Jafer Mohammed (whose name had prompted this rendition), the head of the Bale Nyala Guiding Association and a much respected and thoughtful man, may or may not have heard us; and was either too dignified to elicit a response, or was just simply baffled at the apparent idiocy of two men in their thirties.

We were trailing behind our three horses carrying supplies, Usman the cook, and Haji and Abdullah the horse-handlers. Moving through an idyllic valley of azure and silver ‘everlasting flower’, it felt a bit like a cross between Switzerland and the Lake District, Only lifted up on stilts. Floating above the cloud line. In Africa.

“Nothing can get in the way of our plans Iago”…

Always mount your horse from the right-hand-side

We had left the plains below, overflowing with an abundance of exotic and endemic wildlife; Mountain Nyala, Redback and Bushback deer, warthogs, Anubis baboons, and most special of all, the Ethiopian Red Wolf. We had seen both solitary hunters and small packs drifting across the dusty flatlands of their hunting grounds, a rusty coats glistening in the sunlight.

When we reached camp I saddled up one of the horses to go for a ride. Horses in Ethiopia are named according to their colouring. Our three stallions where therefore named Odocha – ‘White & Black’, Adi – ‘White’ and Dama – ‘Brown & Red’. You only ever mount from the right-hand-side of the horse in the region, and I accordingly hopped up onto Dama, taking him through a trot, to a canter then finally into a short gallop – it felt great to be out alone in the midst of such vast empty spaces.

We had pitched our tents below a long line of rock formations averaging about six meters high that resembled the stone statues of Easter Island. It was like camping below an army of sentinels.

Binder and I climbed up and onto the highest sentinel to watch the saffron orb of the sun gently dip through the valley we had walked up that day. Usman, Abdullah and Haji rolled out a rug facing Mecca to the northeast, and in a neat line bowed down and prayed.

A moment of glory

The everlasting flower gave a silver sheen with hints of azure to the rolling hills. We could feel the air thin and were afforded an amazing view across the entire western plateau to the mountain formations in the distance, broken in layered contours like ploughed earth. Our path led us to ‘the stone forest’, which stretches for miles and truly resembles an alpine forest, only consisting of freestanding smooth rock formations, twisting up in bizarre, unpredictable shapes.

From a nearby summit, the long expanse of the steppe revealed itself with shadows cast down from the atmosphere gliding across the pale flaxen tableland.

Facing south, the plateau plummeted down in front of us for a thousand meters in heather-clad mountainsides leading to golden barley fields, groves of giant bamboo and the lichen-covered Harenna Forest.

Wild Arabica coffee grows in the far south where lions and wild dogs can still be found.

It was an incredible moment. Binder and I both had the feeling that we had somehow followed our feet to a very real and powerful place.

In the morning we had fresh goat’s milk in our coffee, which a mother in a grass hut had brought us as a neighborly demonstration of hospitality. We made our way down into the forest where we sat by the roadside and ordered sodas as being a Muslim village, they sold no beer. 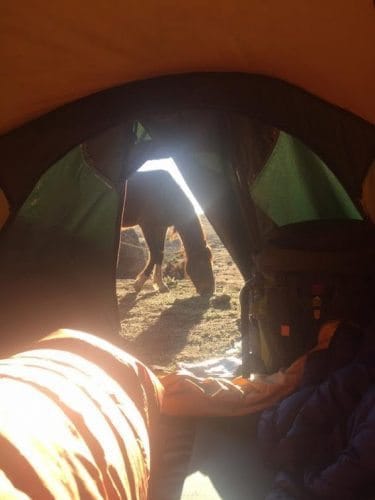 We were aware that we were rather dirty and so headed down to a nearby stream for a good wash. Finding a lovely little number trickling through a pasture, we stripped to our underpants and took turns splashing in the refreshing water. On the way back to camp we crossed the river that leads to several waterfalls and found Usman and Abdullah washing their clothes upstream from two young girls, involved in the same occupation.

The girls were cooking some form of inedible sour apple in a vat over a log fire as when cooked the apples make an effective soap. The girls used their feet to work the lather into the family blankets amidst much giggling and snatching of glances at the two foreigners. Back at the campsite we sat on the soft grass in the evening sunlight, chatting the night away with our companions until a blanket of stars was drawn softly across the sky above us.

Binder had to return to Addis the next day and so left in a mini van I had previously arranged for him. Our remaining party set off up the road to climb back into the highlands, passing a group of Columbus monkeys jumping between several large trees. I mused on how the black and white markings of their faces give the impression that they are wearing a Cardinal’s hat; watching us in religious repose from the high branches.

Mt. Tuludimtu at 4383m is the highest peak of the plateau and the second highest of the country. There is a small telephone station perched on the pinnacle with numerous cream-coloured satellites fixed to the steel mesh of a tower. Its guard came over to greet me as I finally scrambled my way to the top. He had on a large ALASKA beanie hat, a scarf hanging down each side looking like long ears. He had no front teeth and somehow resembled a friendly teddy bear.

I had my hand-held steady-cam-mounted video camera with me, which does not look unlike a laser gun, and, having a strange little Star Wars moment to myself, reasoning that I must just be tripping on the altitude somewhat. Saying that, the view around me was from another planet. Beneath a cobalt sky, light flaxen shades whipped up with olive, azure and rust spread out all around me, shadows from the fast-moving clouds drifting across them at pace. 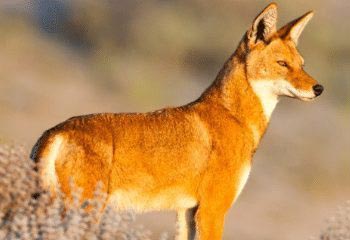 With a strange air of finality it felt like the end of my journey. I had been travelling in the country for near on three months and would never be able to top this. I also missed having my friend around to share it with. A sea of cloud nestled right up to the table’s edge in plumes of fluffy cotton wool bedding. I felt all sorts of emotions that I didn’t fully understand.

Back in the big bad city

After a brief sojourn in the Sothern Nations eating fried fish and watching hippos at lake Awasa I headed back to Addis. Whereas previously I had found the capital claustrophobic and dirty, now I reveled in its diversity, craving again the luxuries of civilization. I went to dinner at the best Italian in town [Castelli’s – we knew it was the best place in town because there is a framed photo of the proprietor and his wife gawping next to Angelina Jolie and Brad Pitt] with an American friend and we had spaghetti in a truffle sauce and linguini with saffron and drank good red wine.

I went to watch a band comprised from all of the African nations along the Nile play in a theatre on instruments I didn’t understand. I sat in the garden of the oldest hotel in the country drinking macchiatos, writing in the shade of a tree. I went to house parties. I went on a date with a beautiful local woman to a wine bar and we talked for five hours. Some friends from London were hosting a conference that week at The Sheraton and we stayed up late listening to live jazz with the bar tab covered.

I took taxis when I knew I could have taken the metro, I had spaghetti with cream and spinach for breakfast with a beer as well. But it soon all wore off. And at night as I lay down in bed and closed my eyes, I would see the blanket of stars and the wild windswept tablelands and smile to myself as I fell asleep.

Sam McManus is the founder of www.yellowwoodadventures.com