Getting Lost in Barcelona´s Gothic Quarter

I was delighted when a friend of mine invited me, quite out of the blue, to spend a few days in her home in Barcelona. Nothing better than to have a local showing you around and if this local loves to travel and is a keen photographer, that´s the icing on the cake.

I have visited the city many times before, but that was in my former life as an attorney. What I knew inside out are the airport, hotels, banks and any kind of offices..and not much beyond.

This time, my high heels were replaced with comfortable trainers, the pinstripes with leisure clothes and the bling stayed behind. No appointments to keep, just free to roam around as I pleased, utter bliss and freedom.

I had made myself one promise though: I wasn´t going to look at anything by Gaudi, Miro or Picasso.

You can´t really avoid it, because the place is an outdoor museum for the three, so a fleeting glance was all and I concentrated on finding ´the hidden gems´ to use a well-worn cliché.

My hostess, being a very polite lady asked me what I wanted to see. `What I really want,` I replied, ís to get lost in a quarter full of mystery and surprises with some art thrown in.“Easy,` she replied. `The Gothic Quarter is what you want. I´ll take you as far as the cathedral, point you in the direction of Plaza Pi and from there you can wander around to your heart´s content.

I´ll meet you in La Boqueria in four hours.`

I didn´t have a clue what La Boqueria was but she kindly explained that it was Barcelona´s oldest and most colorful covered market close to the Liceo and that anybody could give me directions should I get lost.

Because that is what I had in mind, not bothering with a street map or downloading any apps on my mobile.

Although it was early December, I was lucky because I had five days of brilliant sunshine, blue skies, and rather mild temperatures. So close to Christmas, decorations and lights were everywhere making the place very pretty and festive.

Barcelona´s Gothic Quarter is a rather vast area stretching between the Ramblas de Catalunya and Via Laetana. Characterized by narrow winding streets and alleys, medieval palaces, tiny squares, and churches, it´s a place which really invites to look into every nook and cranny in search of extraordinary things.

As promised, my friend left me at the cathedral and to my delight, I found a Christmas market at the foot of the steps. What caught my attention were pieces of a tree trunk with a Papa Noel face in front and a blanket at the rear end.

`It´s a cagatio,` a friendly lady at one of the stalls explained. `It´s for kids. They give him sweets, then run around, and lift the blanket to see what presents he has, well… shat, there is no other word.` A tradition typical of Catalunya which I found very funny and, needless to say, a cagatio was my first purchase.

This was my only planned stop 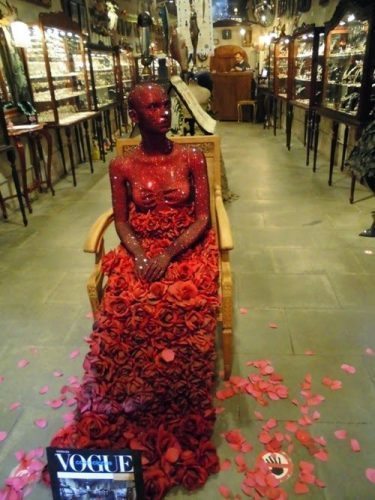 on my expedition to Barcelona’s Gothic quarter because I knew that artists exhibit and sell their works on Saturdays and Sundays in Plaza del Pi, just opposite the Basilica of the same name. So, I made my way there first and was surprised by the quality of the paintings.

From landscapes to portraits and abstracts in all sizes and price ranges, the colorful works were displayed under white umbrellas and the artists standing next to them, happy to talk to you and explain their techniques.

With one exception: a woman who got all worked up when I raised my camera. She waved her hands around wildly and shouted: no photographs: Oh well, as she was doing nothing else but copying Botero, that was fine with me.

A few steps away I discovered another square full of stalls selling cheeses, dried fruit, olive oil and other Spanish products. My next purchase. A selection of different goat cheeses.
The Basilica Santa Maria del Pi attracted my attention because I saw guitar concerts advertised at the entrance. Spanish music at its best in a Gothic church is certainly something to bear in mind for a further visit.

Then I started my meandering in earnest, just turning left and right into ever narrower streets. Looking into a shop window, I saw a fabulous rose lady sculpture made from rose petals and upon entering discovered an unusual mix of a perfume shop, art gallery, antiques, and knick-knacks.

There were more sculptures and it came to light that they were made by one of the owners and used in the famous Mayflower show in Girona. In fact, I spent as much time talking to people as I did wandering around. It helps that I speak Spanish but many of them also have quite good English, so anybody can have fun and learn interesting things.

The many quaint shops are one of the main attractions of the Gothic quarter and the further you penetrate into the center, the better they get. One sold nothing but hand-woven baskets, another designer dresses and a third was dedicated to masks and outfits for the carnival with a huge doll standing outside.

Turning yet another corner, I came to the ancient Jewish quarter, called Call. I only knew this because I saw a sign indicating the direction to the medieval synagogue. It turned out that this is the oldest and smallest synagogue in all of Europe, only fully discovered in 1996.

Built in 1306, the synagogue rests on Roman foundations which can be seen on a glass floor in the foyer. On top came medieval structures and the tiny entrance is now higher than it originally was. By decree of King James II, a synagogue could not be bigger than the smallest Christian chapel, that´s why this synagogue is to extremely small.

Two tiny rooms and the foyer is all but it´s packed with history, explained by a guide in English, Spanish or Catalan every half hour or so. The building is being looked after by an association which also offers guided tours around the Jewish quarter, but I didn´t have time for that.

By now it was starting to get dark and I decided to make my way in the direction of La Boqueria to meet my friend. In another of the small streets, I happened upon a 4-star hotel, called Neri.

What makes it special is the fact, that it only has 20 rooms and is located in a converted medieval palace. In I went to rest my feet and have a coffee at the bar, where the waiter asked me if had been on the roof. No, I hadn´t, but I went up immediately and was rewarded with a very romantic roof terrace and splendid views of the entire Gothic quarter with the illuminated cathedral at the center. 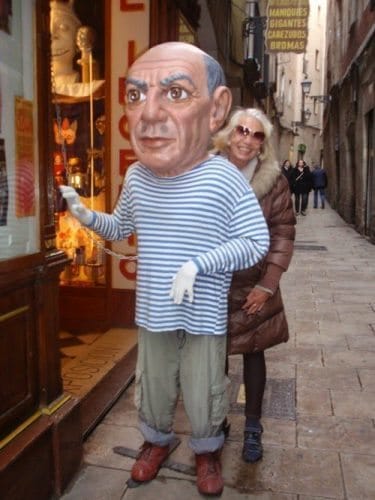 Already in medieval times, La Rambla was a place of trade and butchers set up their stands outside the then city walls. La Boqueria in its present form was founded in 1827 when fishmongers and fruit and vegetable sellers were allowed to offer their wares there too.

The art deco metal roof which is a landmark was inaugurated in 1914 and is visible from far away so that you can easily find your way there. My friend was standing at the entrance which is also the most colorful section of the market. Fruit, vegetables, sweets, smoothies, and spices are arranged in patterns which resemble paintings.

The traders, often third generation merchants, praise their wares loudly and let you taste generally. Further down follow the butchers and a central roundel is dedicated to seafood, live and otherwise, and fish. The best products from Spain are on offer here, what you can´t find at La Boqueria you won´t find anywhere in Barcelona.

Here I made my last purchase of tree-ripened mangos, pears, and pineapple, a fitting end to my tour of the Gothic quarter.

Tip: The best way to get around in Barcelona is by bus or Metro. The Barcelona Card which is available from 1-5 days allows free public transport and free or reduced entry to museums etc. For details visit this website.

Inka Piegsa-Quischotte is a former attorney turned travel writer, photographer and novelist based in Miami and Istanbul who writes with verve and flair about destinations where it’s warm, particularly the Mediterranean World. Her work has appeared in The Expeditioner, Literary Traveler, Travel Thru History, Popular Hispanics, Traveln-on, Smithsonian magazine, Europe Up Close and Turkish Airlines’ inflight magazine, SkyLife.

www.glamourgrannytravels.com
If this story has inspired you to travel, why not check out the prices to get there and make it happen? Search airfares, hotels, and rental cars here. Thanks!