This area where France meets Italy is unique in many ways, perhaps most notably in the regional specialties that dominate the menus.

Sure, everyone has heard of the Salade Niçoise, and it can be found on every menu here (along with every menu in all of France), but there are some lesser-known specialties from Nice and its environs that deserve recognition and that are equally if not more delicious than their famous leafy and fishy relative.

Every good boulangerie and tavern in Nice has pissaladière behind the comptoir. Like many of its equivalents throughout France, the simple boulangerie is evolving into something more than a place to pick up a baguette or pain au chocolat or croissant.

Now, lines stretch out the door during the lunch hour for pre-prepared sandwiches and paninis. In some cases, this includes pizzas on thicker, bread-like dough, and in Nice, that selection is always augmented with pissaladière.

The first place where we went didn’t give us the choice of fish or no fish. They only served it without.

The pissaladière is simple. It’s made with the same bread as the other boulangerie pizzas (think of a drier, heavier version of American pizza dough as opposed to flat, crisp Italian pizza dough) but is simply topped with a bed of caramelized onions and a few black olives. Some places give you the choice to have your pissaladière with an anchovy on top, others simply serve it that way, claiming tradition.

I think I would have liked to have that added flavor as it is basically just an onion pizza, although a tasty one, as the onions had clearly been cooked for hours and had developed a sweet taste.

They had also been slightly charred on top, giving it a bit of crunchiness. Overall, it is highly recommended, and a must when traveling to Nice, but I had a better version of it in nearby Cagnes-sur-Mer at Viva Socca, a small resto in the city center.

I ordered the Assiette Provençal, a variety sampler of many local specialities. The pissaladière was tangier this time somehow, perhaps because the onions were not toasted on top, and it turned a tasty treat into a delicious one.


Socca is Nice’s most famous food (outside of its namesake salad) and it can be found in a variety of traditional taverns in the old town and some places near the port. It’s simple food made with chickpea flour, olive oil, water, and salt. It’s cooked like a pancake or crepe over an open fire on a platter that looks like a metal lid to a trashcan.

A socca pan is an actual kitchen accessory that can be purchased at many of the tourist stalls around town, but I really don’t see the practicality unless you have a wood-burning oven at home. Regardless, even if the device is a souvenir vendor’s ploy for your money, the socca itself is certainly worth your money. It’s the real deal.

I’ve eaten socca on two occasions so far, and there is a reason why it is so popular. For one, you can usually get it to go, wrapped in white butcher paper for easy portability, so it’s an easy, authentic food to snack on as you walk around the open market at Cours Saleya as we did when we bought socca from Thereza, a local legend who sells socca (and other items) from a stall at the market six days a week.

She keeps a 55-gallon drum topped with the socca platter right next to the cash register, but her socca is actually cooked up the street at her small shop and brought down to her fresh from the oven on the back of a moped. It’s delicious.

Even more delicious however, is the socca at Chez Pipa, a traditional socca tavern two blocks from the port. All the guidebooks tell you to go here for socca, and sometimes when a place gets too popular, it can rest on its laurels and the quality of the product can decrease.

That is not the case here. The socca had an extra crispness to the top and edges that didn’t exist on Thereza’s, and that crunchy texture and flavor makes the difference. A sprinkle of salt was all the seasoning that was necessary. I ordered a double order and realistically could have 10 times as much.

The flavor is hard to describe, it has a little nuttiness and breadliness, but this small portion kept me full for the entirety of the afternoon and into the evening. There is truly a reason why this has been a staple in Nice even through hard economic times. 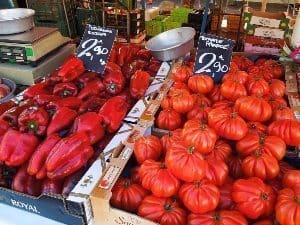 Tomatoes and peppers in the market in Nice. Farcis Niçois

Fresh produce is always easy to find in this region of France, so it shouldn’t be much of a surprise that stuffed vegetables (farcis in French) are served just about everywhere. It’s a simple recipe that is quite tasty. A mix of ground beef and ground pork is browned and put inside a hollowed out eggplant, zucchini, tomato or onion.

Then, it is topped with breadcrumbs and some grated cheese and baked for a while. And voilà, you have the simplest of bar snacks. The pieces are usually pretty small, so don’t order them expecting to get en entire eggplant. 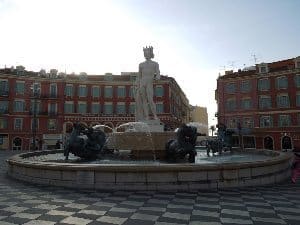 It is usually just a section cut to be eaten in about two or three bites. A great finger food, great with a chilled glass of rosé, the locals choice for wine.

A dessert pastry made of swiss chard you say? No way that can be real and if it is, there’s no way it can taste good right? Wrong. Not only was this one of my culinary highlights so far this year, it served as a great dessert as well as a delicious breakfast.To explain, blettes (swiss chard) are cooked way down until wilted, and either apples or raisins are added to

the tourte to increase the sweetness. Ours was supplemented with golden raisins (probably presoaked in some sort of sweet alcohol), but they really weren’t needed as a sweetener as the entire top of the tourte was covered with powdered sugar.

I didn’t really know what to expect when I broke off my first forkful as I am usually not a huge fan of greens cooked down in this fashion, and I certainly hadn’t had them prepared in a sweet manner, but the crust was crispy and the filling was tender and delicious.

Since trying this unique delicacy of Nice, I have seen the tourte de blette in almost every boulangerie and pastisserie in town. There is also a salty version that would probably supplement a lunch quite nicely or stand alone as a midday snack. Seems like I have more out there to try. Someone’s got to do it, right? 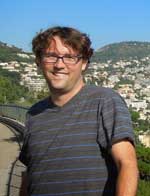 LOVE FRANCE? Get our France Plane Reader with dozens of stories about France to go, on your Kindle, Nook or iPad!

Derek Noll is a former high school English teacher from Kansas City, who has been living in southern France for the past five months.