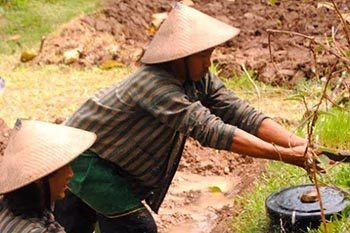 The first noticeable thing that struck me about Pak Iskandar Waworuntu was the piercing glance of his blue eyes. It felt as if he was someone who had unearthed (quite literally) many of life’s great secrets.

And in his idyllic farm, Bumi Langit in Imogiri – on the outskirts of Yogyakarta – I do believe he had. After warmly greeting us at the farm, Pak Iskandar and his wife Ibu Dar, invited me and my husband to join a tour of the farm with a local school group which had arrived from Yogyakarta by bus.

Iskandar was introduced to different cultures from an early age – his mother was English and his father was Indonesian; yet after years of soul-searching, he surrendered himself to the guidance of nature and settled down in Java where he dedicated himself to Islam.

His farm follows a permaculture model (permanent agriculture) – a science developed in the 1970s by Bill Mollison in Australia in which systems are designed that mimic the patterns of nature – enabling communities to live sustainably, while at the same time preserving natural ecosystems.

I hid in the shade as the schoolchildren were taught the names of different species of herbs, fruits, and vegetables, before witnessing the milking of the cows. My fingers smelled of aromatic herbs.

After snacking on some farm-made bread and butter at break-time, I re-joined the children’s tour and discovered more about this sustainable farm which, (aside from producing food,) uses renewable energy, recycles water and produces gas from the fermentation of cattle and goat manure.

Pesticides in the soil

Subur, a Javanese organic rice farmer I once met in Solo, explained to me that after seven years of organic farming, toxicity tests revealed that pesticides had leached into his soil from neighboring farms.

Java is certainly flagging behind Bali in the organic stakes; in Jakarta, I contacted an organic food supplier who informed me that he had closed down due to poor sales, although the organic chain, Healthy Choice, has various markets throughout Jakarta.

Pak Iskandar contends against such issues by conducting educational programs with the neighbors, local students, Islamic groups and universities to demonstrate the interconnectedness of nature; he teaches about the consequences of our actions and how we can minimise our impacts on the Earth.

Iskandar hopes that people will support his farm by buying its produce and he is planning on organising some educational courses at the farm which will include organic cooking and yoga. I was even welcomed to stay as a volunteer to learn about permaculture.

Bumi Langit mimics nature’s way of recycling nutrients and energy and all organic waste is returned back into a functioning system. In permaculture, waste ceases to exist – it becomes a potential resource.

As I trailed behind the schoolchildren I discovered that at Bumi Langit, waste water from the bathroom and kitchen was piped down into a large filtration area filled with rocks and the cleansed water eventually trickled into a fish pond.

The farm therefore avoided using a strong detergent that can destroy the fragile bacteria balance within the water. Toilet waste and cow and goat manure were used to produce biogas in large fermentation tanks.

The gas was then piped up to the stove in the kitchen and used for cooking and the schoolchildren looked up in awe at these hemispherical tanks.

As Pak Iskandar spoke to the children’s parents about the importance of eating nutritional red rice during lunchtime, I helped to clear away the plates and Iskandar’s son, Krishna, taught me about Bumi Langit’s production of compost using kitchen waste.

Three compost pits were used of varying degrees of decomposition; each pit had pipes inside which allowed the oxygen to circulate throughout the organic matter, enabling the waste to aerobically decompose.

Liquid manure from the cow stable was piped into the compost heap, providing essential bacteria for the digestion of waste. Krishna, with animated hands, explained that once gas was seen emerging from the pipes, it was time to flip the waste into the next pit; later, when the compost was ready it was scattered around the crops.

Leaving the kitchen we ventured towards the farm buildings where we could smell the aroma of freshly-baked bread from Ibu Dar’s ovens. The farm’s produce which included bread, dairy products and homemade jam was sold every weekend at the organic market in Milas Café in Yogyakarta.

Chemical fertilizers and pesticides are responsible for killing many pollinating insects as well as the soil’s bacteria, reducing the soil’s productiveness.

As the sun began to set, Pak Iskandar’s daughter plucked some large mushrooms from the wood. “Perhaps you shouldn’t do that,” I warned her – worried that the mushrooms might be poisonous. Upon returning to the kitchen, her mother, Ibu Dar, took one look at the fungus,

“You found some jamur kuping, good for soup,” she smiled. I was amazed by her quick identification of the mushrooms.

“Saya anak hutan,” she said, meaning – I am a child of the forest – she had grown up near the rainforests of Sumatra. I later discovered that they were cloud ear mushrooms and have many health benefits. Even the wild-growing areas of the farm were packed with nutritional food.

Pak Iskandar and his family are certainly worried about the Earth’s future, but they are one of the few families that have actually dedicated their lives to doing something about it.

Sustainable living could be the answer. For Pak Iskandar this is also a spiritual journey – to help restore sunnatullah – a sustainable, balanced lifestyle in accordance with natural laws. There was something magical about Bumi Langit which means Sky Earth – it is a place where even the clouds have roots.

How to reach Bumi Langit in Imogiri:
It is best to call ahead to book an appointment – call Bumi Langit directly on +62 274 85 72 121.
Address: Jalan Imogiri-Mangunan km 3, Desa Giriloyo, Wukirsari, Imogiri, Bantul.
Renting a motorbike for the day would be advisable. The village of Imogiri is situated 30 minutes away from Yogyakarta, up steep inclines. 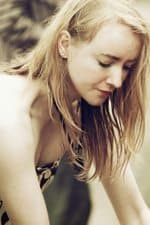 Tess Joyce is a free-lance writer from the UK who has lived in Indonesia for the past three years where she loves to explore the forests and the coral reefs. Visit her website.

Read a similar story about studying Permaculture in Thailand

India: Pulikali Festival, the Tiger Dance
Around India in 80 Trains: A Strong Woman's Expedition
Indonesia: Cruising to Komodo, Bando and Other Islands
Burma's Buddhist Monuments
The Sundarbans: Life on the Water
Top Picks for Alternative Adventures in Africa