From the Egg to the Arches, Albany is Filled with Incredible Public Art

New York City may be known for art and artists but head north along the Hudson River for two hours and you’ll find a collection of 92 works of abstract expressionist art in Albany, the New York State Capital.

The Empire State Art Collection is located at The Governor Nelson A. Rockefeller Empire State Plaza was envisioned and built in the 1960s and ’70s by its namesake.

Besides art, it houses state government, memorials for everything from crime victims to fallen firefighters to Vietnam, and an engaging museum. All worth a visit.

Construction of the concrete and marble New York State office complex required the razing of 98 acres of 19th-century homes in a poor neighborhood, displacing the people who lived there and cutting a cement and marble swath across a city, distancing two neighborhoods and destroying a third.

Nelson wasn’t the first of his line to chase poor people from their homes to achieve his dream. When his grandfather John D. Rockefeller built the family homestead, Kykuit, in Pocantico Hills, New York in the early 1900’s, he relocated homes along the nearby rise so that his view might not be marred. A Rockefeller vision indeed.

Weekdays in Albany, state workers leave their office buildings at lunchtime to converge upon the vast open plaza overlooking the Hudson River. In the warm months, food vendors set up at lunchtime and farmers offer produce and flowers.

On weekends, when the state offices are closed the Empire State Plaza is like the Zocalo in Mexico City, a vast open area built for gatherings, but unlike the Zocalo, in that, it is almost devoid of people. Then, the plaza is visited by occasional runners, dogs with their owners and tourists on their way to the New York State Museum. It becomes a ghost town.

Governor Rockefeller did a number on the neighborhood but the silver lining in this urban renewal cloud is the modern art collection he placed on view to the public, including outdoor sculpture.

Weekends are the perfect time to contemplate the outdoor pieces of the Empire State Art Collection in silence and solitude. No jockeying for position among fellow gallery patrons.

You can walk completely around each sculpture, and “gulp” touch it. Some are climbable. And if you are a resident of New York State, you are part owner of this art collection. It’s time to see your legacy.

Here’s a small selection of the pieces on the plaza, accompanied by suggestions on what to do after you’ve taken a stroll in this wonderful open-air modern art museum. Your mother would tell you to wear a jacket– the wind can blow off the Hudson with force.

Calder maybe the most famous artist represented in the New York State collection, having gained fame through his mobiles, one of which, “Four at Forty-Five,” you can see in the lobby of the nearby Corning Tower. He also created this sculpture of painted metal triangles. In summer, when the reflecting pool is full, it seems to hover over the blue water.

The lovely 19th-century building behind the sculpture is the New York State Capitol, thankfully not torn down by the Rockefeller administration. Guided and self-guided audio tours are available there, but only Monday through Friday. Expect to be searched and leave your nail clippers home. The governor works here.

You might avoid walking under George Rickey’s Two Lines Oblique, fearing that one of the freely spinning spikes will decapitate you. Alas, anyone under eight feet tall may safely pass under.

The angular building behind the sculpture is the New York State Museum, housing the New York State Library and exhibits including the Adirondack Mountains, Harlem in the 1920’s, and a giant room full of fire engines, many resembling ornate espresso makers, and the 11,070-year-old Cohoes Mastodon.

A restored carousel offers rides on painted ponies or in a teacup that spins. On a more somber note, the museum offers a heartbreaking 9/11 exhibit highlighting rescue efforts.

It is amazing that Stahly’s teakwood structures still stand after 40 years of visitors sitting and climbing the nearly 40-foot tall tower pictured, and the surrounding smaller structures closer to the ground. Unfortunately, as of this writing, barriers surround the piece with a sign that states temporarily closed.

Maybe all of the years have taken their toll. You can still look.

Next to Stahly’s tower, but not pictured here, is the Corning Tower, named after Erastus Corning II, the longest running mayor of Albany, or any city. Eleven terms. The term “back room deals” was probably coined to describe Corning’s brand of politics.

Local boy, great American novelist William Kennedy based his novel “Roscoe” on Albany politics, in which the character based on the elder Corning explained to his son why it is okay for dead people to vote, “People say voting the dead is immoral, but what the hell, if they were alive they’d all be Democrats. Just because they’re dead don’t mean they’re Republicans.”

At 43 floors, it’s the tallest building in New York State, if you don’t count New York City. Corning wouldn’t. There’s an observation deck, which naturally, being Albany, is only open weekdays. On weekends there are still great views of the Hudson Valley along the wall that flanks the entire southeast rim of the plaza.

And you can peek through the windowed lobby to see a knight on horseback made of hubcaps and other pieces from the New York State Art Collection.

Is it a building? Is it a sculpture? The Egg, the concrete half sphere that is home to two theaters, seems to defy gravity and has been compared to a spaceship and well, an egg.

Every musician who plays there comments on the structure, but only rock duo “They Might Be Giants,” wrote a song about it. The song starts, “The egg, exciting and old. The egg, you’ll do what you’re told. The egg, no corners for you.”

When it was built, the Egg was called “The Meeting Center.” Ah, imaginative bureaucrats.
Plenty more accessible art is available on the plaza, climb or sit on George Sugarman’s Trio, with its yellow swooping curves.

Check out more sculpture and a collection of paintings from The Empire State Plaza Art Collection in the underground world beneath the outdoor plaza referred to as the concourse, including Jackson Pollock’s Number 12 located in the Corning Tower Concourse Lobby. 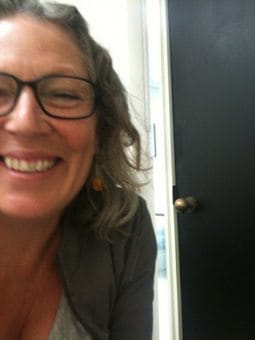 Shelly Breyer has been published in Family Circle, Garden Prints and BUST. Her day job is writing stories for alumni publications at the University at Albany.