Tracing Family Roots Back to the Isle of Man

Tracing Family Roots Back to the Isle of Man

My imagination played. Across the bay, a ferry was leaving port. Perhaps it was on a day like this, about 150 years ago, that my great-grandfather left his home here on the Isle of Man to set sail for Liverpool and a new life in England.

However serious you are about genealogy, a family holiday in a destination where your ancestors lived can add a unique extra dimension. In my case, I was eager to see the family history records in the island’s capital, Douglas. It was also a good reason to share a holiday with my parents, both active senior citizens.

Bearing in mind the historical aspect of the holiday, I hoped that the slow ferry from Heysham, on Morecambe Bay, would be the most authentic way to reach Douglas. So it was that I found myself being buffeted by the wind on the deck of the Ben-My-Chree on the route across the Irish Sea.

I had scheduled the trip not to coincide with any of the island’s motor-racing events, and especially the TT motorbike races, which attract large numbers of visitors in late May and early June. The journey was leisurely and isladequately comfortable.

A taxi was easy to find, and I was soon strolling along the front, breathing in the seaweed-scented air, and listening to the calls of ocean-going gulls. It felt like time travel to the seaside of my childhood.

The Isle of Man is a self-governing British Crown dependency. British currency is legal tender, although the postal service requires Manx stamps. The island’s capital, Douglas, is home to the Manx Parliament, Tynwald. This, it is claimed, is the world’s oldest continuous parliament, having operated for more than 1,000 years. Such national pride is almost palpable in the air.

The Gaiety theatre and opera house proudly faces the sea, and the distinctive three-legged Isle of Man flag, the triskelion, flutters in the breeze.

A fully working steam railway, a horse-drawn tram clopping along the sea front, and several Victorian post boxes complete the feel of a town somehow out of time; a town simultaneously occupying the nineteenth, twentieth, and twenty-first centuries.

This echoed the main reason for my trip, of course, and I soon located the Manx National Heritage library at the Manx Museum, just a short walk from the promenade.

To make the most of both holiday time and local research, some preliminary work is essential. Sources for family history research are relatively easy to find on the internet, and although the Isle of Man is administratively separate from the United Kingdom, census returns are available online. Using my notes from these, I was soon immersed in place names such as Onchan, Santon, and Kirk Michael, trying to picture life four or five generations ago.

The library staff set me up with a microfilm reader and showed me around the filing cabinets full of index cards pinpointing baptisms, marriages, burials, and a range of other texts and images. I made slow progress, piecing the generations together and gleaning extra nuggets of information.

One of the glories of using family history as the basis for exploring a local area is the personal aspect that it brings. I learned that my great-great-grandfather had been a lead miner on the island. This therefore decided the excursion for the next day: my mother and I would head out on the electric railway to visit the lead mine at Laxey. From there we would continue to Snaefell, the highest point on the island.

The narrow-gauge Manx Electric Railway has its terminus at the north end of the promenade in Douglas. The train consisted of two carriages, one open and one closed. The old third-class style was less restricted for views and photographs, so, given the good weather, we clambered onto the wooden benches.

The train clanked punctually out of Douglas and up the hill through Onchan. The name was familiar from my research, and as I took in the impressive vista of Douglas Bay and the sweep of the Irish Sea, I thought of my ancestors, five generations ago, standing on the cliff-top to see the boats come and go.

The century-old railway stock wound sedately past halts such as Groudle and Fairy Cottage, and eventually pulled into Laxey, where we climbed down and grabbed a visitor’s guide from the station café.

For a town with a population of less than 2,000, Laxey is full of sightseeing possibilities. These include an old town and harbour, but my priority was the lead mine.

The Mine at Laxey

Many small places in the world seem to claim fame as home of the world’s longest this or the world’s tallest that. The island guidebook claims that The Great Laxey Wheel is the biggest working waterwheel in the world. This is no false pretension.

Lady Isabella, as the wheel is named, dominates the hillside on which she was built. However, when she was opened in 1854, the overwhelming concern would have been her capacity to pump water out of the mine 1,500 feet (450 metres) below. I wondered if my great-great-grandfather had been at the opening ceremony.

There is public access to a platform above the wheel. It requires some little agility to navigate the narrow stairway, ducking under various obstacles.

As the huge wheel rotated just inches below my feet, I felt I was rolling on the Irish Sea once more. It was only after finding my sea legs that I raised my eyes to the view of the old miners’ cottages down the valley.

After slight vertigo at the top of the wheel, it was time to get an idea of how it would have been at the bottom of the mine. On the same site is a short public adit, or mine entrance.

The attendant handed out yellow hard hats and assured us that the adit was only a few meters long, but added that the roof was low and the ground was wet.

She was absolutely right. Both my mother and I were thankful for the helmets as we caught slight bangs to the head as we made our way gently along the tunnel, trying to avoid the puddles formed by water dripping through the rock.

It was dark, cramped, and wet enough in the adit at surface level. It was hard to imagine working a quarter of a mile below ground a century and a half earlier. Again our minds turned to my mother’s great-grandfather, who laboured here without modern safety equipment in the days before social welfare. Glad to breathe fresh air again, even after just a few minutes in the adit, we walked back down the trail.

Back at the railway station, the train to the island’s peak was a single wood-panelled carriage. It pulled out of Laxey station exactly on time and ground its way uphill, providing some wonderful views back down to the mine area and the Great Laxey Wheel. I was able to remember the spots so that, as the train rattled down the slope on the return journey, I could sneak a couple of photographs between the trees.

The mountain railway ascends almost to the peak, at 2,036 feet (621 meters) above sea level. It was overcast, but the air was fresh and dry, and it took only a minute to stroll up to the summit proper. Local lore has it that it is possible to see five earthly kingdoms from this point: Mann, England, Scotland, Wales, and Ireland.

The clouds and mist were light enough that we could spot most of these, with the exception of Ireland. Local lore also has it that there are two other kingdoms visible from Snaefell: Heaven and Neptune.

As mountains go, Snaefell on the Isle of Man is admittedly on the small side, but planted firmly in the middle of the Irish Sea, it emanates majesty. I stood at the peak, gazing at the view in all directions, and considered again the genealogy that had brought me here.

A million people in North America alone are estimated to have Manx ancestry, as testified by groups such as the North American Manx Association, and the Isle of Man is currently renewing its family history resources to cope with increasing interest. Wherever your family history research leads, however, it can give you a fresh perspective of a town or region and bring the details of local history to life. Here on Snaefell, with my head almost literally in the clouds, I could feel a sense of my roots.

Ferries to Douglas, Isle of Man, are operated from Heysham, Liverpool, Dublin, and Belfast by the Isle of Man Steam Packet Company: www.steam-packet.co

Flights to Douglas are operated from several airports. Check www.manxflights.com for details.

For accommodation on the Central Promenade in Douglas, try the Empress Hotel, with prices starting at about GBP 65 per person per night. This and other options can be booked online at iomguide.com.

Hotels such as the Empress run their own restaurants, which can be on the expensive side. Otherwise, dining in Douglas is a little limited, but a number of places serving English, Indian, and Italian food can be found centrally on North Quay and on Castle Street, near the main shopping area.

The Manx Electric Railway, the Snaefell Mountain Railway, the Great Laxey Mine Railway, and the Isle of Man Steam Railway all run during the summer season.

For family history research, census returns for the Isle of Man are available online, on a subscription basis, through ancestry.co.uk A renewed Manx Ancestry Centre is due to open in 2010. Information on this and the Manx National Heritage Agency is online at www.gov.im/mnh 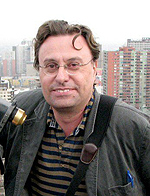 Bruce Marsland has been working and travelling as an English language professional since 1991, and is the founder of thetextbiz.com