We all waited anxiously in the dark, huddling by the window in the hopes that the last few specs of light coming over the horizon from the already set sun would give some visual aid.

The heat from the day was still trapped under the newly hammered in tin roof, baking the people inside.

But when it finally seemed like the event was starting to drag on, a light bulb was hung over a beam and plugged in, revealing the new house to a cheering crowd and appreciative family.

As many college students took their spring break to head off to popular beach destinations, a group of 30 students from the University of Massachusetts, the University of Illinois, and Yale University chose instead to travel to Montevideo, Uruguay, and construct emergency houses for the poor.

Through Hillel Uruguay, the three schools participated in a program called Un Techo Para Mi País — Uruguay, which means A Roof for My Country — Uruguay.

Working on the outskirts of Montevideo, we spent two days of our community service trip working with Techo in 24 de enero (24th of January), a barrio that has been set up for Uruguayans living below the poverty line.

This barrio is the kind of town you’ll see on TV with the missionary or celebrity asking you to send money. But there were no cameras there — only volunteers who were trying to do some good for people they’d never met before. 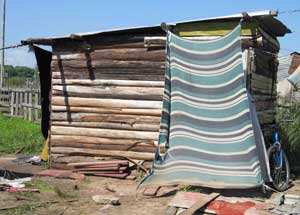 The government lets the people live there without taxing them because they consider the wooden shacks they live in to be tents.

This also keeps them from getting welfare, which continues the cycle of poverty. The people who live there are hardworking and care for their families, but they have hit hard times and can’t get out of the hole on their own.

Breaking off into groups of four to build four new emergency houses, I went to work on a house for 54-year-old Richard González. Richard is a kind man with an old shrunken look to his face, the years having took their toll.

Always the hard worker, he took the lead and was always on top of the construction. A generous man, he shared whatever water or Mate tea he had, and when he had some packs of freeze-pops to give, he passed it around.

Richard lives with his two kids, María and Richard, as well as with Cintia, a girl that he has been raising and considers his own child. The children are 12, 10, and 14 and have been living in 24 de enero for over a year, causing different types of health problems and making life difficult.

There were tons of children who came out to see the action, all touching us deeply. Richard Jr. and his friends Ernesto and Mathias, who loved to play with our digital cameras and give high fives, helped out in the work anyway they could.

Even Carlitos, the 5-year-old boy with a 3-year-old frame would march in and out to see what was happening with a wide grin on his face.

The work we did for two days was long and hard, but we had a lot of help. Not only did Richard do a lot of the work himself, but his neighbor Reuben helped as well, even though he himself was getting nothing out of it. That seems to be the way things work in 24 de enero. Everyone was willing to help each other because they’re all in the same situation together.

The first thing we had to do was plot and dig holes next to the current house. Richard wanted to connect his new house, rather than putting in a separate one, so that he could continue to keep his family connected, but have more space.

To clarify, the term house here is used loosely, because in reality it’s nothing more than just a one-room shanty. In his old house, Richard had five people living in one room with a refrigerator and tons of refuse taking up space.

There is only one bathroom in the barrio that everyone must share, and everywhere you look there is trash on the ground. The dirt road is flanked by two ditches with dirty water wandering down from the field and train tracks nearby.

Most of the first day was spent just working on the holes. Even the children were helping out. Between breaks we would talk with them and play some games. Just a piggy-back ride or taking some pictures with a digital camera were great thrills for them.

Other kids from the neighborhood also came out to help and play, and soon the entire barrio seemed to overflow with life. Young children came out of everywhere, many holding newly born puppies or kittens. It seemed as though the entire barrio was eager to grow.

After sharing lunch on the ground, we got back to work alongside the family, and by the end of the day, we had the floor completed. The kids were sad to see us going, but we promised that we’d be back the next day to finish the job.

208 Million Latin Americans live under the poverty line, and though Uruguay has one of the highest levels of completed studies, one in every three Uruguayans lives below the poverty line. More than half of the children born in Uruguay are born into poverty.

A big part of this is due to the economic crisis that occurred when Argentina’s economy and government crashed in 2002.

As a result of the crisis, many families have moved into irregular settlements like 24 de enero. This is where the volunteers from Un Techo para mi País come in.

The program was originally started in Chile in 1997 by university students. The program now works throughout Central and South America in 10 countries. Techo was brought to Uruguay in June, 2003, with the first two houses being built in December 2003.

The mission of Techo is to raise social awareness and the caring spirit of Uruguayan citizens through their volunteer work. Volunteers range from high school to university students, as well as the volunteers from the United States

The families who get these houses don’t get them for free. Richard had to put down 10% of the cost of the house, which shows why he was so interested in making sure it all got put together well.

The idea of charging for 10% of the cost not only gives the new homeowner a sense of investment, but of personal fulfillment and satisfaction from being able to help themselves. The goal isn’t to put together a permanent shanty house, but rather to give a temporary solution to a problem that is in the process of being fixed. That’s the development of Techo’s three stage process.

Step 1 is the construction of the emergency housing, which all of the student volunteers took a part in. It took us two days to build four houses, each 6.10 X 3.00 meters, made from wood and tin roofing.

The materials for the house are in part provided by various donations from local companies, as well as private Uruguayans who want to help their fellow countrymen.

This stage includes the entire community. A part of stage 2 can be seen in the community center in 24 de enero, where kids can find toys, and every week a meeting is held with information sessions that anyone can take part in.

Step 3 is the final stage meant for the entire community to find permanent housing with the rest of the city. At long last, the goal is for the family to move away from the slums and into a permanent residence where they can work towards moving out of poverty.

On the second day we were surprised to find that there was a delay with the materials and supplies. The wood still had to be cut from the carpenter, and we spent the better part of four hours waiting. It was anything but wasted time.

We used this opportunity to play with the kids and talk with the other volunteers, learning more about the community and the people living there. I took a walk with Richard Jr. to the store, where everything was bought on credit.

The clerk handed out supplies and wrote down the expense in his ledger. Two jugs sat on the counter distributing wine in plastic bottles, and people came in and out getting various things.

Though most people here don’t have much, the necessities are bought on good faith, and whenever they have the money to pay for it, they will.

When we got back to the house an impromptu soccer game suddenly broke out — guys vs. girls. In just a few minutes nearly half of the barrio was out playing in the dirt road, stopping every minute to clean off the ball after it had fallen into a ditch.

Dozens of children played and laughed, enjoying their time with the Americans as the González family awaited their new house.

It was during this time that I could see what it really was all about. We weren’t just building a house — we were giving them hope and some happiness.

Richard passed around a water jug, or a cup of Mate, sharing whatever he had. Anyway he could, he was thanking us.

We’re all humans, and sometimes it means a lot for people from another country to come and sit with you, listen to you, and be your friend. Many people might look down on the people in 24 de enero for being poor, but all we saw were friends who needed a hand.

By the time the materials arrived after lunch, the sun was at its highest point, making the work exhausting and tedious. Once the walls were up we had to get the beams in place.

Though Alejandra Olivera and Pancho Cobas, volunteers with Techo, had built many houses before, they had never tried the type we were working on. It took some time and careful calculations, but soon enough we were working on hammering down the tin roof.

Because we got off to a late start we had to race against the sun, working after it had already gotten dark. There aren’t many lights in the barrio, and we didn’t finish until we could barely see in front of our faces.

We set up some confetti and balloons while Richard was next door looking for a light bulb, then all piled into the new dark house.

At long last, the light was plugged in and Cintia and María took turns cutting the ribbon over the door. Finally, Richard would be able to give his family more space and work towards getting out of the shantytown.

The excitement in the faces of Richard and the children was contagious, spreading to everyone else who was there.

With some effort on our time off from classes we were able to give a family a new chance and some hope. Though they still have a ways to go, at least it’s a start. And that’s better than nothing.

We flew American Airlines from JFK to Montevideo via Buenos Aires

Jon Brandt is currently volunteering as an English teacher in Cuenca, Ecuador. When he’s not working he tries to travel as much as possible. Check his blog Travel Guy.

Grenada: A Nation on the Rise