Verdun, One of the Saddest Places in France

The Lost Villages of Verdun, France, Bombed to Oblivion in the Great War

Over a withering nine-month period in 1916, several hundred thousand French and German soldiers lost their lives here. Almost all of them are still buried here today.

In the process, entire towns and villages nearby were literally wiped from the earth.

Military cemeteries of various nationalities began to pop up immediately after the war on the outskirts of town.

At every intersection, it seems multiple signs point at a shocking glut of graveyards, scattered in all directions.

The reality of Verdun is that it is a ghostly reminder of the mindless death and destruction wrought by the ruthless efficiency of WWI.

More than History in Verdun

Verdun is far more than a site for the history or military buff, far more than a memorial for fallen soldiers, and far more yet than a place of commemoration for the children of the men who fought here. It is a reflection of who we are at our worst.

It is the human shame that cannot be explained. The tragedy of Verdun can only be experienced by visiting here. In short, Verdun is a place every person must visit to witness the horrors of the “war of attrition.”

Perhaps the clearest physical evidence of the sheer scale of bombardment that occurred here are the nine lost villages of Verdun (Beaumont, Bezonvaux, Cumières, Douaumont, Fleury, Haumont, Louvemont, Ornes, and Vaux.) They are today completely wiped off the map, relics lost to history.

Parts of the village of Fleury have been marked up, allowing visitors to gain a vague sense of what life may have been like a century ago in this typical French country village. Dig the ground lightly and just below the surface, tiles or stones from old edifices emerge.

A bakery here, the church there, someone’s private home down yonder – all victims of the ruthless savagery of thousands of howitzers. Strolling through this bombed and pockmarked remnant of what was once a town shocks the conscience.

Much of the original battlefield of Verdun has been preserved as a massive memorial. Markers, trails, and driving tours take you through the battle lines and beyond.

To truly appreciate the scale of this human disaster, visitors are invited to the Ossuary, the final resting place of over 130,000 unidentified soldiers on both sides of the battle.

The enormous piles of bones that have been placed here can be viewed through small windows, providing a powerful perspective on what “130,000” really means in human terms.

Ironic that these men should forever rest together in death when they hated one another so harshly in life.

Inside the cavernous hall of the Ossuary, a placard of eternal friendship proclaims the everlasting peace to which Germany and France have now committed themselves.

Steps lead to the top of the Ossuary tower, offering a lovely 360-degree view of the green forests and hills that surround greater Verdun.

From here, the scale of the battlefield, as well as the masses of graves that dot the region, become all too clear.

The Indian and Muslim cemeteries nearby bear witness to the lesser-known aspects of the war – that WWI was a war fought by colonial powers using the full might of their overseas possessions, killing hundreds of thousands of soldiers who had only the vaguest idea of where Europe even was.

Hard Not to Cry

It is almost impossible to walk among the graves without shedding a tear, even with no direct connection to the dead. To climb into the ditches and trenches, to walk into the remnants of bomb craters, without imagining the nightmares of the soldiers who fought here, is to be soulless.

The battle site is enormous. Visiting all of it requires an entire day. Highlights include a tour of the ruins of Fort Douaumont, one of the key fortifications that had been built to defend the city of Verdun.

One of the most remarkable impressions left at the battle of Verdun is the thousands upon thousands of bomb craters that are still clearly visible on the ground. At places, as far as the eye can see, the ground has been pounded into a moon-like landscape.

Visiting Verdun is a remarkable experience for almost anyone, as much for its historic value as also for a scenic and quiet getaway from the hustle and bustle of Paris.

The town of Verdun may be small but it has its outsized share of enjoyable restaurants. Check out Chez Mamie for inexpensive but exquisite French fare (52 Av. de la 42ÈME Division, 55100 Verdun.)

Or head over to the Sherlock Pub and Restaurant for a flavor of the British Isles, along with pleasant views overlooking the Verdun river (Rue du 61ème Régiment d’Artillerie, 55100 Verdun.)

Getting to Verdun is straightforward. The short but beautiful 2.5-hour drive from Paris makes it an ideal day or overnight trip for visitors who yearn to see the less-touristy side of France. A two-hour train ride is also possible, though, given the scale of the battlefield, a car is highly recommended. 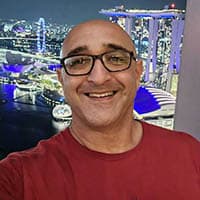 Abdul Rastagar is a father, husband, and all-around curious guy. He unwittingly became a frequent traveler as a baby and has chosen to never stop. Traveling the world, exploring diverse cultures, meeting different people and growing as a person with each new trip are at the core of my identity. I aim to use my travels and my writing to help bring our planet closer together. Connect with me on Twitter (@CaliAbdul) or on LinkedIn (www.linkedin.com/in/rastagar)