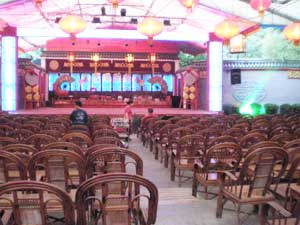 Settling into our front row seats at the opera in Chengdhu China we couldn’t help feeling lonely.

Behind us were 20 empty rows, to our right a trio of Japanese businessmen and to our left a bunch of bewildered looking tourists, no doubt wondering where the rest of the audience was.

Normally at this time of year, the Sichuan opera theatres sell out every night, but since the earthquake hit in May, tourists have been staying away and the show that was to round off our weekend in west China echoed in the empty venue.

As the artists took the stage, slightly outnumbering the spectators, I mused at why the visitors weren’t coming back to the region.

Chengdu, the provincial capital, was largely untouched by the earthquake and we were amazed to find its buildings still standing and its streets free of rubble or chasms.

Sadly, most would-be visitors, both domestic and international, fear the worst, and although the city was spared by the quake, it is now being hit economically by the dearth of tourists.

Natural disasters aside, Sichuan is best known for its fiery food and endangered residents – the giant pandas. Our weekend started with a sample of the former.

We opted for a local joint – with a conspicuous absence of tourists – and sat down to begin the tricky task of choosing our food. Ordering in China can never be described as dull.

English menus are not the norm, so ordering dinner either involves randomly choosing some appealing characters with a point and a prayer, or else scouting around, staking out other diners’ meals, then dragging the waitress over to point at what you fancy. Neither method is foolproof but we opted for the latter, signaling at a huge dish of red hotpot being devoured at the next table.

With some enthusiastic gestures uncharacteristic of the normally coy Chinese people, our waitress tried to warn us of this dangerously spicy dish in favor of a blander option more suited to a foreign palate.

Believing ourselves to be worthy of the challenge, we stuck with the fiery dish, a soupy chicken hotpot (complete with beaks and feet) that we later lived to regret.

While Chinese people are often reserved, we instantly discovered that inside the confines of a local restaurant, all bets are off. Diners come for a loud, lip-smacking time, shouting to other diners, gnawing on the popular delicacy of boiled chickens’ feet and throwing anything inedible (which for an outsider is rather a lot) straight on the floor.

A fascinating experience it might be, but eating on a budget in China is far from relaxing, so straight after finishing, we called it a night, stopping en route for ice cream to cool our burning mouths.

Leaving the pandas for the finale, the following morning we headed instead to the People’s Park. In the unlikely event that you’re struggling to find life in a Chinese city, make a beeline for one of the glorious parks found across the country.

On this humid summer afternoon, Chengdu’s ‘People’s Park’ was alive with kite fliers, tai chi practitioners, wailing kids, street performers and a large group of eccentric grannies running through a dance routine straight out of Fatboy Slim’s ‘Praise You’ video.

We could have happily spent the whole day wandering hidden corners to seek out eclectic characters, but we discovered the best place to soak up the unique atmosphere was, naturally, a tea house. The People’s Park contains a dozen places to savor a cup of cha, each with its own rambling garden and patio.

Sipping painfully sweet glasses of jasmine and chrysanthemum tea (beware: Chinese people like their drinks heaped with sugar), we watched the locals shouting gleefully as they played the omnipresent game mahjong and chomped on huge piles of sunflower seeds.

With only a couple of days to see the city, we had to cut our people-watching stint short, dragging ourselves away to check out the underrated Science Museum.

Sitting in the shadow of a gigantic statue of Chairman Mao, the museum holds hundreds of interactive exhibits allowing you to chat with robots, fly a spaceship and feel the vomit-inducing power of astronaut-strength G-force.

I don’t know if you’ve ever noticed it, but there seems to be an odd phenomenon affecting science museums worldwide, causing around half of their exhibits to cease working at any one time.

Chengdu’s museum is no exception, but despite getting frustrated as we pressed buttons or pulled levers without result, we still found enough to keep ourselves entertained for close to two hours.

After a trying half-hour jostling with sweaty children to take prime position in the ‘Space Room’ queues, I was thrilled to find an exhibit devoid of other patrons and threw down my bag to ‘Become an Instant Star’.

Now I generally believe that karaoke is a pursuit to engage in only after several pitchers of Long Island Iced Tea, but since there was no-one around (and no booze to be had) I thought a quick Beatles rendition might be acceptable.

Plus the chance to see myself superimposed on to a cheesy pop video background on the big screen was just too much to pass up.

The sound of an English song being belted out, however badly, soon drew a crowd and, hooked on the applause, I quickly found myself wrestling the microphone from a group of teenage girls in order to murder an early Madonna hit.

After an embarrassing lack of clapping, I left the music hall and, soon afterward, the museum.

I could hardly sleep that night – not through the shame of screeching ‘Like a Virgin’ to an audience that thankfully couldn’t understand me – but because the following morning I would, for the first time in my life, get to see a panda.

Sichuan’s largest and best-known panda base at the Wolong Nature Reserve was sadly destroyed by the earthquake and is currently off-limits to tourists.

The pandas have all been moved to safer homes and the approach road, which was poor before disaster hit, is now virtually impassable.

Chengdu itself boasts an important panda research base, where visitors can watch and even cuddle one of the animals (the latter for a hefty fee), but we were keen to escape the city and explore further afield. We headed for Bifengxia, two hours southwest of the capital, a region spared by the quake.

The reserve sits in an astoundingly beautiful gorge kept verdant by the year-round rains (one local claimed the region receives no less than 280 rainy days each year!) and although the animals here are, of course, in captivity, the surroundings take away any feelings that you’re visiting a zoo.

I could hardly contain myself once inside and barged past other arriving tourists to get my first thrilling sight of a panda. Although the center is currently overpopulated – what with the extra residents arriving from Wolong – I was happy to see that the animals still have room to roam.

Each enclosure is a vast, forested space with climbing frames and easy access to their cage should they want to escape the year-round rain or head inside for a snack of bamboo or ‘panda cake’.

We spent a full day wandering the grounds, ‘oohing’ and ‘aahing’ from pen to pen, wandering along the river that descends deep into the gorge and ending at the cluster of enclosures furthest from the gate – an area that many tourists fail to reach.

There we met Bai Yang, a young male who spends his days climbing trees, Fu Fu, a chubby guy who loves to play up for the cameras and for me the star of the reserve, Zi An.

Rescued from the wild, Zi An is 17 – an old man in panda terms. Blind in one eye and with only three legs, he’s in a sorry state, yet quite the most adorable thing I’d ever seen.

Back in the city that evening, we, along with the ten other spectators, took our seats at the deserted opera auditorium. Chinese opera has little in common with its western counterpart, containing a random yet oddly well-juxtaposed range of acts including classical music, shadow puppetry, slapstick comedy, and traditional dance.

The highlight of the impressive show was undoubtedly the renowned ‘face changing’ act, where masked performers change their costumes dozens of times in a matter of seconds.

Sipping our bottomless cups of jasmine tea (shrewdly ordered sugar-free) I pondered how sad it is that tourists are keeping their distance when the city needs them most.

And it’s not just sad for the locals but also for potential visitors themselves, who are missing out on a perfect chunk of China where wildlife, traditional culture and modern-day Asia are all within easy reach.

Of course, the current absence of tourists means you’re guaranteed VIP seats at the opera, but performance this good deserves an audience that outnumbers the cast. My fingers are crossed that Chengdu makes it back on to travelers’ ‘must do’ lists soon.

After graduating with a degree in journalism in 2000, Lucy Corne has been nursing a stubborn case of itchy feet.  She has written three guidebooks on Spain and South Africa and lived in rural South Korea, where she taught English to teenage boys and lived a life of semi-celebrity as one of four non-Koreans in town. She is currently on an extended trip to Asia. Visit her website.

Empty seats at the opera