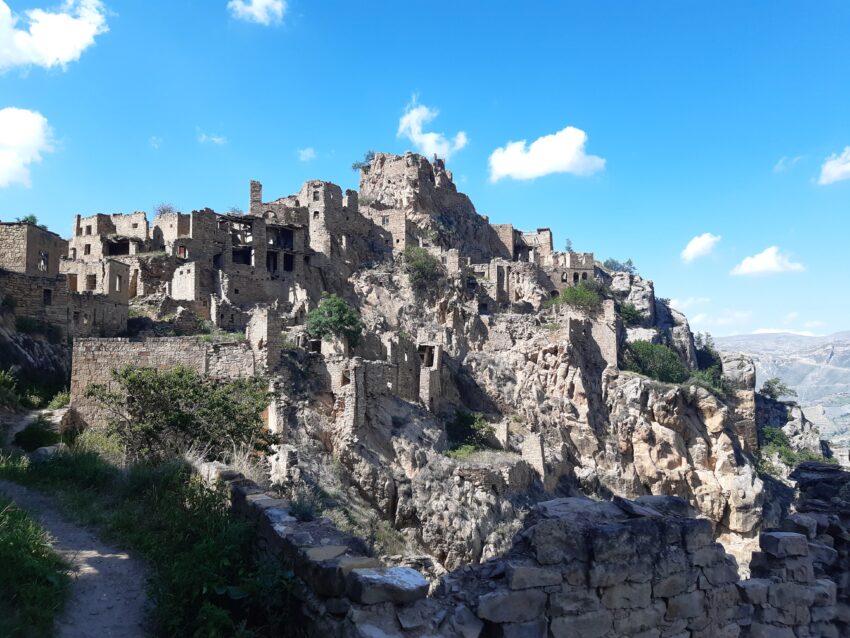 Climbing Past Abandoned Houses on the Way Up to see Gamsutl

Stepping out of the airport in Makhachkala I couldn’t help wondering if I had made a huge mistake by coming here.

Feelings of nervousness before a trip are the norm for me, but usually, that morphs into excitement long before arrival.

In this case, I think I had read too many articles referring to Dagestan as the “most dangerous place in Europe”, and while I mostly dismissed it as hyperbole, I had to wonder if there was some truth in all the noise.

Trying to avoid attracting too much attention, I managed to find a solitary cab driver who seemed friendly enough and was able to understand my beginner-level Russian.

It was only 9 pm, but the city was dark and empty as we drove through its quiet streets.

Arriving at the hotel I wondered if the streets and shops were always this deserted, or if it had just been my late arrival.

Normally, I love to wander around after a day of flying, but my nervousness got to me and I went back to my hotel room early, spending the night listening to the occasional car passing below my window.

The next morning brought me a lot of comfort however. Makhachkala was surprisingly modern just a few blocks away, with lots of outdoor restaurant terraces hiding in the shade of tree-lined streets.

The city seemed much more authentic than the Soviet-era planned cities where I had spent most of the past year.

The local hospitality reminded me of several trips I had made to nearby Georgia and Armenia, where the locals seem legitimately concerned with whether you are safe and enjoying yourself.

Everyone Has a Friend

Everyone seemed to have a friend who could help me on my trip, and finding a marshrutka (shared taxi van) into the mountains was easy with the help of a local coffee shop owner who had taken notice of my helplessness.

Minibus to the Mountains

The minibus ride into the mountains took a few hours, partly due to the frequent security checkpoints.

My confidence grew as none of the passengers seemed to think it was strange that an American was visiting Dagestan. Rather, I was treated as just another one of the group.

We followed narrow, curving roads with the emerald water of the Sulak River drifting in and out of view along mountain passes.

I was treated to the front passenger seat, and the driver’s friendliness was almost overwhelming.

He seemed genuinely insulted when I said I couldn’t eat even one more piece of fruit from the massive bag he had bought at a roadside stand.

Once the matryoshka reached its final destination, Gunib, it was another 30 minutes to my destination,  I had spent the past few months mesmerized by a photo I had seen of this abandoned city, almost 1,500m up in the Dagestani mountains.

The photos showed dozens of crumbling buildings built directly on the top of a mountain ridge, jutting up so drastically that it looked like the spine of a sleeping dragon.

The town was supposedly over 2000 years old and had once held over 300 families. Ever since seeing that photo, I had felt that I had to make my way to this Dagestani Machu Picchu.

The final 30 minutes of my trip to the abandoned mountain town and Gamsutl was done in a beat-up unmarked Lada taxi, that a local shopkeeper had directed me to.

The language barrier meant discussion was limited, but I was impressed with his driving. The driver was like a local Moses, parting herds of hundreds of sheep that were sharing the narrow roads with us.

His car could only make it halfway up the mountain before he had to pull off the road under the shade of a tree. He motioned me up, pointing to an overgrown path up the hillside.

I hadn’t expected a real hike and was thankful that I could leave my backpack with him in the car.

The path snaked up the edge of the mountain, lightly carved into a hillside. At times the dirt path was hardly visible among the plant life, and I was quickly wishing I had dressed better for the heat.

Even at this height, there was no escape from the heat and humidity, and the temperature in town had been close to 30c.

Luckily I found a small stone spring near the summit, where I could refill my water bottle.

Sitting on the edge of the fountain I sprinkled water on my hot forehead and took in the sites.

Endless mountain ranges surrounded us in all directions, and aside from the road below there were no signs of civilization.

The final few hundred meters were easier walking, as the path wound around the final corner and widened into what must have been the main street of the town at one point.

I saw sandy brick buildings lining the ridge at the end of the road.

Most of the buildings were missing their roofs and doors, and the walls were crumbling down. There was a cool breeze across my face as I reached the peak, but the long walk up made it obvious why the location wasn’t ideal for a town.

I stopped to rest at the peak, where a small archway seemed to mark the center of town.

Leaning under the shade of the brick walls I let the cool breeze wash over me. From this vantage point, I could see the path continue through the town before fading into the distant hills.

Most of the houses were built in clusters along a single path, although the lack of cars meant that the town had never been limited by roads.

The edge of the city was built directly into the cliffs, with windows overlooking the canyon below.

I spent the next hour wandering between the houses.

Most were missing their doors and roofs, and the dirt floors had been overwhelmed by vegetation.

The light green grass of the town’s yards seemed to be better maintained than the interior of most of the buildings.

As my supply of water ran down I headed back to the center of the town, where a small hill rose above the rest of the town.

The summit provided a panorama view of the long-range of mountains encircling the valley, along with most of the town.

I took in the view not knowing if I would ever be back again. I imagined being the final resident who had left, years ago.

Did they sit in this same spot, wondering if they’d be back? I could see eagles circling the valley, tiny black spots engulfed in the blue sky.

Breaking out of a Daydream

The voices of a group of hikers broke me out of my daydreams, reminding me that this town wasn’t completely abandoned.

I thought of my driver down below and realized I should leave soon before he began to think that he had been abandoned as well.

The walk down was much faster, and I found my driver resting under the shade of a tree.

He asked in Russian, “Beautiful?” and all I could do was nod. During the quiet drive back into town, I gazed at the mountains around us, wondering what other hidden treasures may be hidden there.