100 Places in Italy Every Woman Should Go 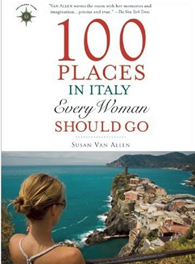 In Ravello, where life is more beautiful, we are given the taste of what life is like, not only through the foods but through history and culture. Van Allen’s knowledge and love for Italy is expressed through cooking, with descriptions so vivid, one will feel as though they are present

PIEDI DEI DIO (GOD’S FEET) is how Italians describe the smell of Parmigiano-Reggiano cheese. When Micaela, my cooking teacher, unwraps a giant chunk, I bow my head and inhale. Divine!

Out next comes the prosciutto-salty, rich, woodsy. Here I am, with Parma’s culinary star-the delizioso products that turned this town into a gourmet mecca. I’d be happy to just sit down with these two, a loaf of bread, and a glass of wine.

But, Micaela’s set to lead me in another direction. She’s a young, energetic signorina in her early thirties who teaches out of her sweet little apartment kitchen at the edge of Parma’s historic center.

We’ll make tortellini stuffed with that Parmigiano, along with ricotta and chard. The prosciutto will get wrapped up in beef and cooked up in wine with a little rosemary to become Rosa di Parma.

These are recipes Micaela learned from her nonna Elena. Elena is now up there on my list of heroines. Not only for her cooking she taught Micaela that she passed n to me, but for the stories, Micaela tells me about the amazing woman as we mix eggs together with flour to make the pasta dough.

Elena was a partisan—one of the brave, underground groups who formed an Italian resistance movement during World War II-after Italy’s 1943 surrender to the Allies. They carried out brilliant covert moves from their mountain hideouts, fighting the fascists and the Nazis.

She took on the dangerous job of delivering messages to her compatriots in the mountains. Once, riding her bike through a tunnel she was stopped by German soldiers. Hidden in her long, black, curly hair was rolled up notes. She was a cute young girl, kept her head steady, flirted a bit. Got away with it.

I’m stretching and kneading pasta dough on a big pine board as Micaela shows me just what part of my palm to use, the right pressure, when to turn it, She’s encouraging, like a soft-spoken coach. And there’s more to the story…

Up in the hills outside La Spezia, Elena met the man who became Micaela’s grandfather. Once, they were in the back of a truck, lying flat, hiding in an empty water tank. German soldiers stopped the driver and opened fire, riddling the tank. If they’d been standing… From that day on, they vowed to always be together. He died when Elena was thirty-seven. She had his wedding ring forged to hers and never re-married.

Now, I have shivers, the good kind you get from a good story. And the dough, miraculously, ha actually turned out. We spend relaxed hours here in the tiny kitchen, stuffing the tortellini, making tiramisu, picking rosemary from Micaela’s little terrace herb garden to add to the roast. It’s cozy.

She has me laughing when I asked her how she learned to speak English so well. She was in a high school exchange student and lived with a family in Wisconsin.

She almost didn’t make it all the way through, because the first thing she saw when she arrived was a just-killed deer hanging in the garage. “When I told my mother she wanted to get on the plane and bring me back home.”

But Micaela called it an adventure. An adventure where she ate “Deer and deer and deer.” She even went out with the bow and arrow to hunt. And every night the Wisconsin mamma would slice that deer, put it in a microwave, pour a can of cream of mushroom soup or some ketchup over it for dinner.

I am so glad I’m having dinner here and not in Wisconsin. Micaela sets a round table in the living room with an elegant white cloth and china. She pours Lambrusco, the wine of the Emilia-Romagna region, thankfully not a real fizzy one.

Then she brings over a framed photo: It’s Elena as a young woman, looking strong, with the exact same curly, dark hair that Micaela has. “That’s where she hid the notes,” Micaela reminds me. We keep the picture on the table as we dig in.

IN ITALY I OFTEN FIND MYSELF GUSHING, “Life is beautiful,” but in Ravello, high above the Amalfi Coast, the gushing gets elevated to “Life is more beautiful!” The sky is bluer, the seas more sparkly. The horizon is more hypnotic. The tomatoes are more delicious.

It’s fitting that in such a divine spot there lives a Goddess of Amalfi Coast Cooking: Mamma Agata. She’s an irritably adorable woman-pleasingly plump, with twinkling almond-shaped eyes. Her smile warms my heart. She’s been cooking for most of her seventy-four years, and to watch her move around a stove is simply marvelous.

This one-day Mamma Agata Cooking Class takes place at her home: an eighteenth-century villa, surrounded by terraced gardens, perched on a cliff with a to-die-for view of the sea. Chiara Lima, Mamma’s daughter, is the gracious mastermind behind the whole operation.

Chiara even turned my traveling pal Carol and me on to fantastic digs nearby at the Vila Scarpariello. It’s an amazing mix of old buildings, and a tower from the twelfth century, hidden in a seaside nitch.

It feels like a well-kept secret, but here I go blabbing about it, because that’s the way I am. Each balconied suite of rooms is unique, and more have kitchens, so it’s a temptation to check in for a week and just bliss out—especially because the prices are so reasonable. One of the many zigzags of stone steps on the property too me right down to the water for a refreshing before-school swim.

Class at Mamma Agata’s begins with lemon cake and coffee. “It was Humphrey Bogart’s favorite, “Chiara tells us. When Agata was thirteen, she began her pro-career working in the Ravello villa of a wealthy American woman who entertained star visitors.

“Baby Agata” was what Bogey called her, and he wasn’t the only one among the glitterati who was wowed by her cooking, Agata has great stories about making pasta e fagioli for nita Ekberg, spaghetti alla putancesca for Fred Astaire, and insalata caprese for Jacqueline Kennedy.

“Jackie was mamma’s favorite,” Chiara says. “She always talks about how she was a real lady, so kind she’d even insist on washing her own coffee cup.”

The lemon cake is phenomenal. And eating is out on the terrace surrounded by the very trees where the lemons came from makes it all the better.

The class is mostly a demonstration. Twelve of us students are gathered in the tiny kitchen, with Agata at the stove and Chaira narrating. Practically everything she makes uses what’s grown right here in her gardens.

This is simple cooking—it’s the details that make it divine. “Listen to the sound of that sizzle, that’s when you know the garlic is ready, now’s when you put in the tomatoes for the sauce,” says Chiara. She’s printed out all the recipes for us in a glossy handout and CD, so we don’t even have to take notes. We can just sip wine and watch the master at work.

It’s delicious fun. We take breaks to walk around the gardens with all of us oohing and aahing over the paradise we are in.

After three hours, we take out places at al long, wooden table on the terrace. Lovely signorine magically appear with platters and pans of everything we’ve watched Mamma have her hands in. The sun streams through the pergola. More than one of us says, “This is the best lunch I’ve ever had.”

For the grand finale, Agata comes out with her exquisite homemade limoncello. The day has gone along like a song.

I can’t resist giving Agata a hug goodbye. My arms don’t reach all the way around, She tilts her cheek to me for a kiss. “Grazie, grazie, grazie,” is all I can whisper to her smiling face again and again and again. I don’t hold back. I am in Ravello, after all, where everything is elevated.

Mamma Agata Cooking School: In addition to cooking classes, you can arrange private dinners or even a wedding party. www.mammaagata.com

Love Italy? Buy our Italy Plane Readerfor dozens of stories about Italy only $2.99…TO GO!