Gay Travels in the Muslim World: An Interview With Michael Luongo 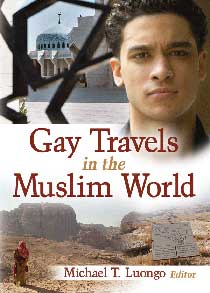 Travel writer and photographer Michael Luongo, author of Gay Travels in the Muslim World, has been to more than 80 countries and all seven continents. Luongo is an avid traveler and has traveled extensively all throughout the Asia and the Middle East.

He has visited Afghanistan three times and has even been through Osama Bin Laden’s caves.

Gay Travels in the Muslim World is a collection of essays by gay Muslim men and non-Muslim men.

I had the opportunity to talk with Michael Luongo and discuss his book, and his experiences as a gay traveler throughout the East:

KJ: Based on your travels how do you feel gay men are received by the Muslim world?

ML: Homosexuality itself is not a problem in most countries. However, ugly clashes form when it takes on a political role. In Egypt the government has a history of targeting gay men, for example the Cairo 52. [52 men were arrested by the government on a Nile barge last year.]

With a rise in religious insurgency, governments need to appear religious, and they do this by targeting homosexuality. In Jordan, Turkey and Egypt, gay rights have existed in exile, while in Iran and Iraq visibility has existed for years. Homosexuality is not a problem in itself; it’s when it becomes political.

KJ: How do the two cultures Western vs. Eastern (Muslim) compare?

ML: In hospitality, foreigners are extremely welcomed in Muslim countries. It’s part of the desert religion. To welcome strangers is the only way to survive in the extreme conditions.

Sometimes I am openly gay, other times it is suggested or figured out. There are times when I don’t bring it up with government officials.

But homophobia is sometimes more experienced in the United States. It’s all situational. In a discussion with a government official in Kandahar, which is known as a gay city, the official himself was gay but the conversation turned homophobic. These things come up easily in jokes.

KJ: You touched on how gay costumes are prevalent in the society, but not labeled. Does this mean gay travelers should be more discrete about their orientation while in these areas or is it alright to show affection to a partner.

ML: I think some of this depends. I will tell you that if you look like someone of the culture, you can do more things of the culture.

For instance, my darker Mediterranean looks mean I can pass as Arabic. That means I can hold hands with someone. If you’re a blond blue-eyed American, I would say no.

What I sometimes find also is that being a man of a certain age, late 30’s, and unmarried, people figure things out.

So without saying I am gay always, the conversation can become, “Well I am unmarried, have no girlfriend, not all men need a wife,” things like that which clue people in, albeit indirectly.

Still, you would be amazed how well many people in these countries can tell someone is gay, which is not always a bad thing.

As for affection, men tend to show affection in these countries in a way Westerners do not. You can to a degree sense some of this, but still men showing each other affection – holding hands, hugging, kissing, in no way indicates a local is gay.

It seems counter intuitive, doesn’t it? Yet this open affection means that you can be gay in the culture and hide in the open as well. You also have to understand that with gender separation, there is a space for male sexual behavior. The homosocial can slide into the homosexual within this context.

Sharia law, also based on witnesses, has within it the allowance for behaviors which might be immoral if publicly stated, but if they occur without witnesses, they never occurred at all by law. It is for this reason that you find privately all kinds of behaviors are tolerated, but would never be publicly discussed.

Thus you can hint at things which lead to something and talk around an issue. So the identity of the behavior in the Western sense, is what leads to the clash; it is out of context with the culture.

KJ: What types of discussions have you had about sexuality with people from the Muslim world?

ML: Things have run the full gamut, from discrete conversations, to conversations about gay pride parades. Again, as I discussed earlier, people are more clued in on these things than you imagine.

Remember the world watches gay weddings in San Francisco? I had some fascinating conversations about gay marriage in Afghanistan in 2004. But each place is different.

KJ:Did you experience any hostility?

ML: I wouldn’t say hostility, sometimes people thinks its funny. Some male western journalists feel the need to be macho, and say things like, “A fag doesn’t belong in a war zone.” Men come into war zones with the thought that they are super macho.

Each place is different, and if you can have a conversation within the context of the culture, then you’re fine. That said, I have been in discussions where there are lots of gay jokes, and you get a sense not to talk about things.

At the same time, you have to wonder why someone is bringing something up, even if as a joke. In Kandahar, in Afghanistan, the former headquarters city of the Taliban, I went to view the walls that the Taliban pushed on women accused of adultery and men accused of sodomy.

When the man taking me around realized why I was interested in the walls, he began to deny that the events happened where they did. I don’t think it was homophobia per se, but that he just didn’t want to have Taliban sites become tourist sites. But it was an interesting, vulnerable point in the conversation, in such a remote, dangerous area.

Buy this Book from Amazon Gay Travels in the Muslim World