A guide to exploring Belgium with a dog

I moved from Australia to Germany a year ago with my husband for a new work opportunity on one condition: our King Charles Cavalier Archie could come.

Since then, we’ve been lucky enough to explore ten European countries with seven-year-old Archie and we’ve found that not only does traveling with a dog change the nature of your holiday, it opens up so many more opportunities to meet the locals.

When I was researching dog-friendly countries in Europe, the small northern country of Belgium kept popping up.

It turns out one in four households own a dog in Belgium. That’s higher than famously dog-loving countries such as France, Germany, and the Netherlands.

So we decided we’d better go and see for ourselves. We packed up the car, popped Archie in the back and headed north. As Belgium is such a small country, it’s very easy to get between cities. Because we had a car, we decided to stay in the picturesque Bruges and the stately Brussels, with a day trip to fabulous Ghent in between. But this is also easy to do on the train, and your dog can ride along with you for a small cost.

The sun had set, the air was crispy, and we were thirsty. We had spent the past few hours wandering through Bruges’ cobbled streets, admiring the ornate gothic facades, dodging the horse-drawn carriages and bicycles, and catching the smell of waffles on every corner. Archie kept the pace slow, stopping to greet every four-legged local he passed with a friendly sniff.

You’ve probably heard of Africa’s big five animals. But did you know Belgium also has a big five? Beer, waffles, chocolate, mussels and fries! As foodies, a lot of our trip was based around eating and drinking as much of these Belgian staples we could.

So, we pulled up our list of recommendations and found our way to Cambrinus to tick the first off our foodie list: Belgian Beer.

As always, when traveling with a dog, we approached the barman before entering, asking: “It is OK if we bring in our small dog?”

“Yeah, and you could bring your big dog in too!” came the friendly reply!

And that pretty much summed up the rest of our 4-day, 3-city Belgium jaunt. Not only were dogs welcome, but they were also encouraged, celebrated, loved. Belgium was the tenth European country we’ve taken our Archie to, and it was by far his favorite. The waffle crumbs on every corner certainly helped.

Back at Cambrinus, my husband and I were overwhelmed with the choices from the 400-strong beer menu, so we handed the decision over to the bartenders. They served up a tasting paddle with eight different Belgian beers, ranging from the light blonde to the famous Trappist beers, historically brewed by monks.

Feeling peckish, we wandered back through the main city square Grote Markt to the Belfry tower, made famous in the Colin Farrel movie In Bruges, to grab the famous Belgian Frites.

The small green vans have been parked here for almost one hundred years, and while they don’t look like much, they offer up delicious fresh thick-cut fries, with a mountain of mayo on top, for around €4.

Our beer crawl continued onto De Halve Maan brewery, where you can taste the freshest unfiltered Belgian beer in their dog-friendly pub, and take a tour through the brewery (although dogs are not allowed).

The final stop of the evening was the local pub De Kelk, headed up by pub dog Eddie, a one-year-old French Bulldog.

We were happy to let Eddie and Archie play wrestle for a few hours while we finished off our beers, ate some delicious fish and chips and chatted with the locals.

That night, we collapsed into the comfy beds in the dog-centric B&B The Dog House, positioned not far from the city center overlooking a quiet canal.

English ex-pats Susie and Nick, and their pups Dexter and Roxy have created The Dog House, a welcoming B&B for dogs, their owners and anyone who wants to enjoy some doggy love. 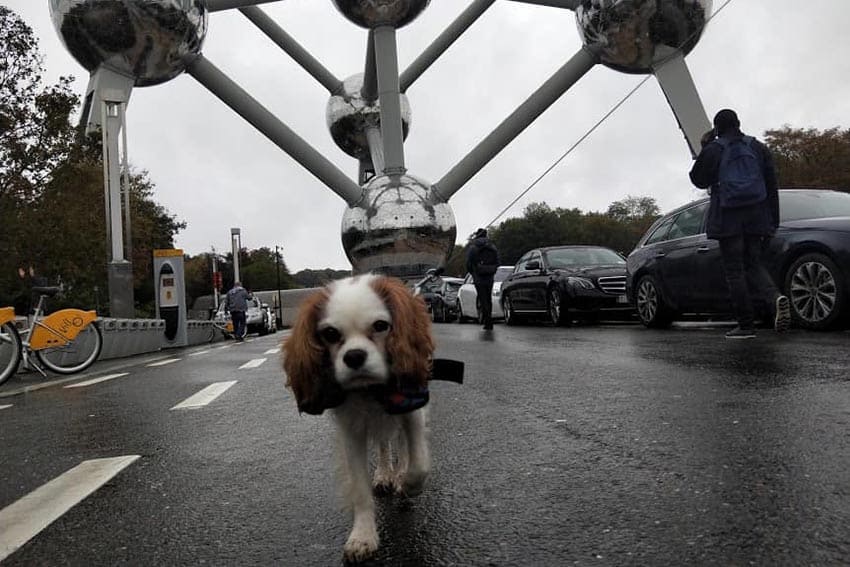 The Dog House is a culmination of a love affair with the city of Bruges and a desire to spend more quality time together, as well as a need for dog-friendly accommodation. The self-confessed dog lovers found the perfect residence around five years ago and got to work remodeling the three-story terrace flat into a stylish B&B, that both dogs and their owners drool over.

The three large studio rooms are all dog-friendly, and the stay includes doggy treats, a big English breakfast (for humans), use of city bikes, with the bonus of no added cleaning fee.

After a leisurely 11 am check-out we took a stroll to see the restored 18th Century windmills, situated along the city ramparts and the canal before heading off to the next stop, Ghent.

The city map quoted Lonely Planet as saying “Ghent might just be the best European city you’ve never thought of visiting,” and I have to say it’s pretty accurate. We only decided to stop in Ghent because it was on the route between Bruges and Brussels, and what a pleasant surprise it was.

I’d heard people refer to it as a mini-Bruges, which does ring true with its gothic architecture and canals. But it’s atmosphere was different. It seemed more lively, unpretentious and cool.

The medieval castle Gravensteen is smack bang in the city center and is the first thing you notice upon arriving. While dogs aren’t allowed inside, a wander around its perimeter will give you plenty of good vantage points and photo opportunities.

If you stop by the nearby Information Centre, you can pick up a free city map which highlights the main self-guided walking tour you can do to take in the main sights over a leisurely couple of hours.

The Great Butchers’ Hall has been turned into spacious restaurants serving only Belgium specialties and welcomes dogs. While there, make sure to try local sweets- Cuberdons, like soft, sweet cones-shaped jubes, thought to resemble noses.

Brussels is a beauty. The ornate guild houses that line the Grand Place set the scene for a stately capital. The old town was surprisingly busy and jam-packed with cafes, restaurants, shops and bars, and plenty of tourists.

As with many cities, a free walking tour is a great way to see and learn about the city in a short time. And of course, it’s a great dog-friendly activity. Both Viva Tours and Sandemans come highly rated, with payment being given on a tips basis.

One of the symbols of Brussels is Manneken Pis, a small fountain depicting a naked little boy urinating into a fountain’s basin pissing. But what a lot of people don’t realize is that there are more statues in the series, the little girl Jeanneke Pis, and the dog Het Zinneke scattered throughout the city center. Navigating between the three shouldn’t take more than 30 minutes and is easy enough to do with the help of Google Maps.

As the capital of the European Parliament, it would be remiss to ignore the interactive and well thought out Parlamentarium visitor center which takes you through the history, functions, and decision making power of the EU.

While it’s not dog-friendly (except for service dogs) we stayed at the dog-friendly hotel Aparthotel Adagio Access, which is only a five-minute walk down the road, so you can comfortably leave your pup in the room while you take in a history lesson.

The comfortable hotel welcomes dogs in their rooms and lobby for a 10€ supplement per night.

If you have a car, a quick drive out of town or a short ride on line 6 of the metro will take you to visit one of the other famous symbol of Brussels, the Atomium. Originally built for the Brussels World’s Fair in 1958, it’s still standing and has become a much-loved symbol for the city.

When it comes to parks, the immaculate Parc du Cinquantenaire is a wonderful, off-lead park that dogs will love. And best of all, the Paul bakery nearby is open every day, even on Sundays, so you can grab a coffee and warm croissant on the way.

The city has put together a great list of places to walk your dog off-lead, which you can check out here.

A visit to Belgium is simply not complete without a meal of moules-frites. Ironically, the mussels are grown in Zeeland which is Dutch territory, but they have become a national symbol since the late 1700’s thanks to the historic canals that brought seafood daily to the heart of the city.

For dessert, you can’t go past waffles and chocolate. Inside the art nouveau Galeries Royales Saint-Hubert shopping arcade, you’ll find Mokafe, famous for their fresh waffles, and Mary’s, one of the hand-made chocolate stores that’s been making delicious chocolates for over one hundred years. The dog-friendly arcade itself is a lovely place to put your legs up and enjoy some people-watching.

So we wrapped up a fantastic long weekend, where we fulfilled our foodie cravings, Archie was warmly welcomed wherever we went, and we all fell a little bit in love with Belgium. 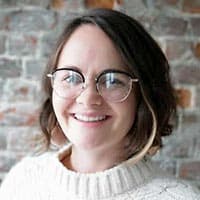 Kat Barber is an Australian freelance writer, currently living in Germany. When I’m not writing, you can find me drinking strong black coffee, reading, exploring Europe with my dog and my husband or attempting to snowboard.

You can see past examples of her writing on Lonely Planet, Colombia Reports and on her website.