Remarkable Lookout Towers You can Sleep in

At two am, I was faced with a typical middle-age problem: I had to go to the bathroom.

The bigger issue was that I was sleeping in a fourteen-by-fourteen-foot wide glass cabin at the top of a decommissioned fire tower on Thorny Mountain in West Virginia, which meant I could either tackle 69 thigh-burning steps down to and back from the outhouse, or crouch over catwalk a hundred feet in the air. What would you do?

My husband and two children, aged 7 and 9, and I had ended up here as a compromise. One of the great challenges of planning travel for a family can be the seemingly unwinnable war between meeting the desires of young children and those of their parents. Museums versus rides. Coq au vin versus chicken nuggets. Mountain summit versus short hikes.

With this in mind, we decided to take the old travel adage that the journey is the destination and turn it on its head, making the destination the destination. Since then, we have stayed in treehouses, a train caboose, lean-to shelters, mountain huts, and a teepee. To our delight, we discovered that it would be relatively easy to add fire lookout towers to the list.

The government offers easy online booking through the National Recreation Reservation System. The local ranger station provides the code for the lock over the phone on the day of arrival. The only caveat is that due to high demand and limited supply, one must book far in advance.

Though the towers are no longer used to manage forest fires, they can be closed when conditions are dangerous. With the recent spate of deadly fires, it is important to check with the local ranger office before heading to your destination.

More West Coast Fire Towers You Can Sleep In

The lookout system came into existence nationally in the years after 1910 in order to systematically battle the overwhelming destruction caused by forest fires. Under President Theodore Roosevelt,  The Civilian Conservation Corps established better trails, created a devoted communication system, and built over 5,000 towers across the USA.

After World War II, the success of public fire education, tighter regulations, and improved roads diminished the need for the towers.  Most of these towers are no longer used, having been replaced by infra-red detection, helicopters, and other technological advancements, and they now can be rented recreationally.

The initial design was nothing more than a “crow’s nest,” a platform built into the branches of a tree. Eventually, states replaced these simple structures with all-steel towers, but they remain primitive, with no water or electricity. One must prepare for them as if for a camping trip, though most are accessible by an all-wheel-drive car.

They are not designed for anyone with a physical handicap, a fear of heights, or very young children. The local ranger station provides the code for the lock over the phone on the day of arrival.

I’d heard, of course, of Jack Kerouac’s infamous stay in a fire-tower at Desolation Peak in Washington State. For 63 days, his job was not to write but to spot fires. As a writer myself, I was seduced by the romanticism of staying in such a place, thinking of how the isolation, quiet, and the lack of internet might force more words onto the page.

I viewed it as my very own retreat, though having kids in tow, as anyone knows, dampers productivity. I should have read Kerouac’s essay “Desolation Angels” on the subject before rather than after my own sojourn, for I would have learned that he too had been seduced and disabused of the same notions. With all that time and solitude, he didn’t write.

Our first stay was at the McCart Lookout near Sula, Montana. We turned off the main road and traveled along the West Fork of the Bitterroot River. We ascended along well-maintained dirt roads until we reached a small parking area next to a sign for the
Johnson Peak Trail.

There we parked the car and prepared, loading packs with food, water, and sleeping bags. We strapped bear spray, flashlights, and a knife to our belts. The trail to the peak required 1.5 miles on switchbacks.

We passed through the pristine Anaconda-Pintler Wilderness just before we crested the mountain. A small clearing gave way to the white-painted wooden structure, which stood on stilts twenty feet in the air.

The tower consisted of only one room, 14 by 14, with a wooden platform that served as a bed. A table and four chairs occupied one corner and a wood-burning stove the other.

A copy of the 1940s issued Lookout Cookbook offered recipes based on government rations, as well as helpful hints on baking at altitude.

The center of the room was dominated by an original Osbourne fire sighting device. A catwalk circumnavigated the entire structure, except for one hatch that could be lifted or lowered as needed to reveal the stairs.

The main feature, of course, was the glass walls, providing a 360-degree view.

We fixed a simple meal of pasta, then sat with our legs dangling off the porch, sipping wine into the evening. It was a few days before the summer solstice and there would be hours before the sunset.

Confronted with nothing to do, we were finally forced into one of the greatest rewards of living in the wild: a confronting of the smallest and largest questions of self.

Swinging in the Hammock

We could read, or swing in the hammock absorbing the twitter of birds or contemplate the clouds. In other words, there was nothing to do but be.

Later, I reread Jack Kerouac’s contemplations on his experience and understood them.

“Sometimes I’d yell questions at the rocks and trees, and across gorges, or yodel— ‘What is the meaning of the void?’ The answer was perfect silence, so I knew.—”

Though I did not shout into the void, I certainly stared into it.

The day’s heat drifted away, leaving us in the verifiable cold of a mountaintop summer. Sleeping in a glasshouse at a high altitude with the double threats of wind and snow meant we’d need to feed the fire all night.

The Rangers had left a well-nourished pile of wood at the base of the fire tower, but we needed kindling.

It took well over an hour to gather small sticks and lug everything up the stairs.

We spent the rest of the evening staring out the windows. There is no greater television than the slow set of the sun and the subtle awakening of stars.

The West Fork Butte lookout tower was next, located near Missoula, Montana, up against the Idaho border at Lolo Pass where Lewis and Clark paused in their explorations. This tower had no stairs. It stood on a giant and treacherous pile of rock and talus.  Steel cables lashed it to the trees, hinting at the cataclysmic effect of the wind.

The third tower, the Yaak Mountain lookout, was a hair off the border of British Columbia.  After ascending for miles along the forest roads of the Kootenai National Forest, we climbed 51 steps to reach the door. A hand-crank eased the effort of lugging up supplies. The kids spent an hour happily attaching and ratcheting our gear to the top.

There are a plethora of decommissioned towers available to rent in  California, Washington, Oregon, Wyoming, and Montana, but the only tower available for an overnight stay on the East Coast is in West Virginia’s Seneca State Forest.

The Thorny Mountain Tower was the highest and most minimally equipped. It held four chairs and two cots. There was no wood-burning stove, limiting usage to seasons with clement weather.

The rangers noted that the surrounding clear cut had been planted with buckwheat and would probably provide excellent animal sightings in the fall. An outhouse, a picnic table, and a fire ring sat at the base of the tower.

It was there that I agonized over my bladder in the middle of the night. In the end, I took the stairs, and it was worth it. I lingered outside, literally star-struck.

Seneca State Forest has a legitimate claim as a star-gazing destination. The nearby Greenbank Observatory houses the largest fully steerable telescope in the world.

Both military intelligence transmissions and scientific research into the Universe require silence, so many transmissions interferences, such as cell, television, and radio, are forbidden.

One Observatory guide recalled a massive local manhunt for a mysterious interference. The culprit, it turned out to be a local resident with a malfunctioning electric toothbrush.

In the morning, we slowly sipped our morning beverages out on the catwalk, reluctant to leave. The rolling sea of clouds reminded me of the ocean, an expansive and infinite view, disturbed only by the mountain ridges, which rose and dipped through the fog like the sea monster of Loch Ness.

Or perhaps a verdant dragon. This, I thought, laughing at myself, is what nature can do- turn our mouths and brains into mush as we propose silly, poetic images, in the effort to capture the language of awe.

Perhaps what these towers do best is grant the polar opposite of our busy, urban lives. They allow us to hear quiet; to see the bare stars without the diffusion of light pollution; to stand quietly enough that a wild animal might dare linger in our presence; to walk trails unreachable by cell service and thereby be forcibly isolated from the noise of the predatory and relentlessly unhappy news cycle. Peace is a luxury hard to come by in our modern lives.

Fire lookout tower reservations are available through the National Recreation Reservation System (NRS) at recreation.gov or by calling 1-877-444-6777. Thorny Mountain Lookout can only be reserved by calling the Seneca State Forest Ranger Office. Prices range from about $30 to $80 a night. 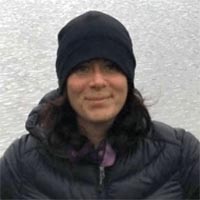 Molly Pascal is a freelance writer and outdoor enthusiast based in Pittsburgh with her husband and two children. Her writing has appeared or is forthcoming in Lithub, The Washington Post, The New York Times, Salon, Newsweek, The Jewish Chronicle, the Pittsburgh Post-Gazette, Fringe Literary Magazine, The Goodmen Project, Profane, and akashicbooks.com, among others.