Tanzania: A Different Kind of Safari 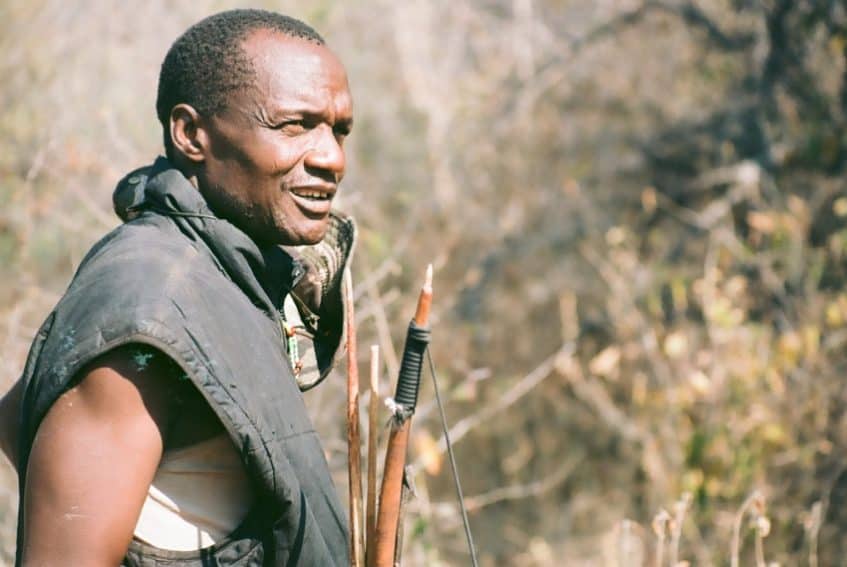 Spending the night with hunter-gatherers in Yaeda Chini, Tanzania

Serengeti. Ngorongoro. Tarangire. These are the names tourists conjure with when planning their Tanzania safari.

But Yaeda Chini? Where on earth is that?

Yaeda Chini is a long way from anywhere. Other than itself. But it’s where my family and I find ourselves one bright blue morning in August, sitting (rather apprehensively) with Bagayo and his extended family. Bagayo is a Hadzabe, a small group of hunter-gatherers. And we’re going to spend the day with them.

First up, the women take us off to gather food. That’s their job. Which means hacking at the hard, stony ground with a

digging stick (in fact a metal rod) and pulling up thin, brown tubers. They light a fire, toss the tubers into the flames for a few moments, then pick them out and peel them.

They taste just like potatoes. But they’re fibrous and we’re told to spit out the fibers. Gabriel, my 30-year old son, missed that instruction as he was so busy taking photos. So he swallowed his. He seems fine.

On the way back we pass a couple of boys up a tree. They’ve found a bee’s nest and throw down chunks of honeycomb. It’s smoky, chocolatey and rich. The Hadzabe use honey to barter for clothes, axes, and six-inch nails. More of the nails later.

We’re then challenged to climb the highest baobab tree in the area. Stakes are hammered into the fleshy trunk. Matty and Bea, my two daughters, reach the top in no time and get a round of applause. But I don’t, which is unfair as surely a decrepit 56-year old scaling 30-foot of the tree is more impressive than a 9-and 12- year old?

The Hadzabe boys snap open a couple of baobab pods and hand us the fruit to eat. They look a bit like chunks of white polystyrene but have a surprisingly citrus flavor and are meant to be packed with

We spend the afternoon making arrows. This is a daily job for the Hadzabe as they lose about 10 arrows a day while hunting (which must be really annoying given how long it takes to make one, but Bagayo and his mates don’t seem too bothered).

They smear them with Blue Band margarine instead of animal fat (thanks to the tourists) then rub charcoal into the markings engraved on the shaft to make elaborate, personalized patterns.

Giraffe tendons (not something you can get with an Ocado last time I looked) are used to fix the guinea fowl feathers which act as flights. And the six-inch nails are bashed and flattened into arrowheads without a furnace, bellows or anvil. Just hammer and rock.

Archery practice. Bagayo and his crew are, unsurprisingly, very quick and very accurate. And that’s in spite of having smoked several spliffs rolled with pages from the Bible (given to them by a well-intentioned but sadly misguided Pentecostal preacher).

Gabriel hits the target repeatedly. “Too many hours playing Tomb Raider, Dad,” he says with a grin. ‘I knew it would come in useful one day!”

The hunt starts in the honey-toned late afternoon sunlight. We track an eland but no doubt the presence of a bunch of tourists with flat feet who stop periodically to take photos don’t help and in the end they catch nothing. Not even a Rock Hyrax (which isn’t a heavy metal band but a squirrel-like creature).

That evening we sit and talk around the campfire. Bagayo tells the story of his youth; how he and other boys were rounded up by armed police and forcibly sent to school. He completed primary school and then dropped out, as his parents couldn’t afford secondary.

Bagayo is smart, kind and curious. He asks us: “What would you advise – continue with this life or give it up?”

Matty says they have to recognize change is inevitable but they should do everything they can to preserve all that is good about their way of life.

Bagayo is impressed and says there aren’t many people in Tanzania who would give an answer like that. Even in the firelight, I can see Matty blushing with pride.

Then come singing and dancing. We throw crazy shapes around the firelight, the dust swirling around our ankles. A moment of real connection between the families of Yaeda Chini and southeast London.

Actually, there’s another connection, too. Dorobo safaris, who organized this trip, have a charitable arm which received Red Nose Day cash back in 2003 to support the Hadzabe’s land rights.

This money helped Bagayo and his people successfully negotiate secure tenure of their traditional lands.

“That was the year I did my sponsored silence – remember?” Gabriel says. “How cool is that? I actually helped the Hadzabe all those years ago without even knowing it!”

We say a final goodbye to Bagayo and his family and head back to our tents, utterly exhausted.

I remember the cold, wet Sunday in February when I organized this trip, and how worried I was about that the family would find the whole thing hideously awkward and embarrassing. How wrong I was.

As we snuggle into our camp beds, Matty says, “That was the best day ever, Dad! I will never, ever, forget the Hadzabe!”.

Find out about trips like this with this outfit www.dorobosafaris.com

Richard Graham has spent his adult life working for charities tackling poverty, mostly in sub-Saharan Africa. He spent a number of years living in Egypt, Sudan and Afghanistan. Most of his work has focused on improving the quality of schooling for primary school children. He is currently the Director of Programmes at the Education Partnerships Group, having previously worked for Comic Relief, Save the Children and Oxfam. Richard lives in southeast London with his wife and two daughters.