We drove a 2018 Chevrolet Bolt EV from Boston up the coast to Portland Maine for a fall weekend in September, and I kept thinking about how we will someday look back on this event and how funny it will sound to be driving an electric vehicle for the first time.

In ten or twenty years, it will be so commonplace and the charging stations will be so frequent, we won’t have to have a map to the only three charging locations in the city of Portland.

But for now, range anxiety sets in, despite the fact that our destination was only 80 miles north and we had a full 238 miles of charge to go.

That’s the one thing about driving electric–range anxiety–that you don’t ever feel in a regular gas-powered car.  The ubiquitousness of gas stations makes it not even a worry, if we miss that station we’ll pop into the next one five miles up the road, with better coffee.

It’s hard not to keep your eye on that big green indicator and worry about where the next charge will come from, and if we didn’t stay in a hotel with its own charger, we might have been nervous.

We also learned that not only are charging stations still not that common, but there are three levels of chargers…20 amp, which gives 25 miles or driving range for 20 minutes; level 3, which provides 90 miles in 30 minutes, and Tesla SuperChargers, which get the car totally powered up in less than 20 minutes, but only work with these high-end, most expensive vehicles.

For our $37K Chevy Bolt EV, we were lucky to be staying at the

….where they have a charging station that the valet takes care of for hotel guests. Nice!  hotel website

We found out another thing about electric car fill-ups….they’re not always free. Someone has to pay for the juice!

The cost from NY to Boston for the electricity to power the Bolt EV was about $6, it’s similar to the cost of running a washing machine for five hours.  Fortunately, at the Marriott, they provide electric car fill-ups for free.

Car owners set up an account at the two largest charging station companies. ChargePoint is one, and the other is EVgo, or they work with Chevy to install a home-charging system using 220-volt plug, like a clothes dryer.

Starting a Chevy Bolt is not at all like a regular car—you hit the ‘start’ button, and lights go on, but it doesn’t make a sound. There is no idling with the Bolt.

You’re going, and you just pull back the shifter a couple of tugs until you’re in D.  Or, you can pull it one notch more and go into L mode, which is the most economical.

In L mode, every time you take your foot off the gas you begin braking and then you can use a little paddle on the steering wheel to go into regenerative braking mode. This puts the power back into the wheels and saves you juice.  It’s a bit of a pain to drive in the L mode, so most of the time we stuck to drive and didn’t worry about the regenerative braking. We had the luxury of being fully topped up by the hotel valets.

One beef we had on short and long trips was that the Wi-Fi system cuts out frequently. There doesn’t seem to be a reason but one moment you’re enjoying listening to your favorite Spotify playlist, and suddenly, you’re not.

We had to wait until we turned the car off and back on again to get it to work. It is the only flaw in this well-made electric vehicle, in my view.

While we were in Portland we walked and walked….our steps counters put us over 13,000 as we first traversed the top of the city, Congress Street, and we visited the famed Maine department store, Remy’s for some very inexpensive sweaters.

A little further down Congress brought us to a wonderful, expansive map store called Mainely Frames and Gallery.

All of the walls had maps, and very detailed pen and ink drawings of huge wide harbor scenes, from Maine as well as around the world, by a Portland artist named Harrison.  He included incredible details in all of these drawings.

Downstairs we met a friendly Maine Coon cat who lived with his master in the gallery.  This store is a real find if you like harbor maps and kitty cats. We walked down through the Old Port and enjoyed the scents of the sea at the city’s best fish market, Harbor Fish Market on Commercial Street.

Lobsters Off the Boat

It’s one of those classic fish monger joints where they have lobsters coming in off the boats from out back and whole fish waiting to be brought home by more ambitious cooks who will steam them whole or gut them themselves to save money.

Swordfish steaks, bluefish filets, and bright-eyed black bass–all the makings of a top-notch dinner if we only had a place to cook. So we passed on buying any of this fresh fish until we were heading out of town the next day.

I have memories in Portland from 37 years ago when I moved here to start a weekly newspaper.  I got into nostalgia mode when I visited the office of the daily newspaper where I got a job after the weekly; today it’s a boutique hotel called Press Hotel.

Everything here is more developed and more gentrified than the Munjoy Hill of those old days. Driving by the house that we rented for $300 a month on Emerson Street I’m sure has now become one of the $2000 rentals or $600K houses for sale here in this desirable neighborhood.

In Portland, one of the classiest hotels that have opened in recent years is the Portland Harbor Hotel, where they have a topnotch restaurant serving North Atlantic seafood called Bluefin North Atlantic Seafood. We had a sumptuous dinner of paella and lobster popover paired with a fine Chardonnay and a girly drink for Rachael that included whole raspberries.

Service was just right, and repairing to the cozy firepit after dinner was relaxing, especially lighting up with a legal marijuana joint. It’s nice that we can do that in Massachusetts and now in Maine, despite the fact that they had to override the veto of their unpopular Republican governor, Paul LePage.

Driving the Bolt is pretty much like driving a gasoline-powered car, but without the sounds of the engine and straining on acceleration. It’s more like a go-kart, you just hit the pedal and you surge forward. Passing other cars is a breeze, but it’s more quick than fast.

One of the only downsides of the vehicle’s design is a large black box that sits just behind the rearview mirror. This makes looking out the windshield a bit more difficult, it creates a strange blind spot with a view of the back right in front of it.

I think this has something to do with the safety features, that include a warning when someone is approaching the driver’s blind side or when you veer even a little bit out of your lane.

Besides the fun of walking in busy bustling downtown Portland and the Old Port area, the parks here are magnificent, including Deering Oaks, Fort Williams Park in Cape Elizabeth, and Two Lights State Park a bit further down the coast.

Two Lights State Park was once where two massive six-inch gun emplacements were built during World War II, you can still see the spot where these defensive guns were located.

They could shoot a projectile 15 miles out to sea from here, but after the war, the US government sold the land to the state for a park, paying only $67,000 for this slice of waterfront.

Today the park is one is of Maine’s most popular tourist attractions, right after the LL Bean store in Freeport.

A weekend trip driving an electric car is a pleasure as well as a glimpse into the future.  Just think about it–there will eventually be no reason NOT to drive a car you can plug in instead of fill up with toxic flammable liquid. 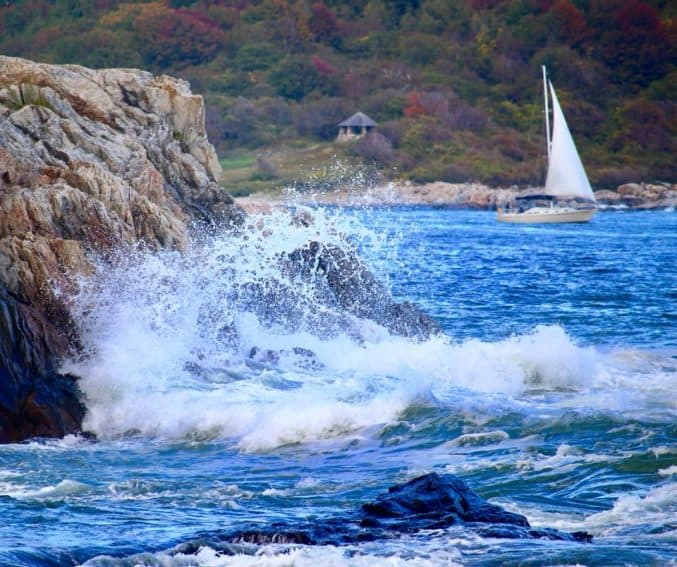 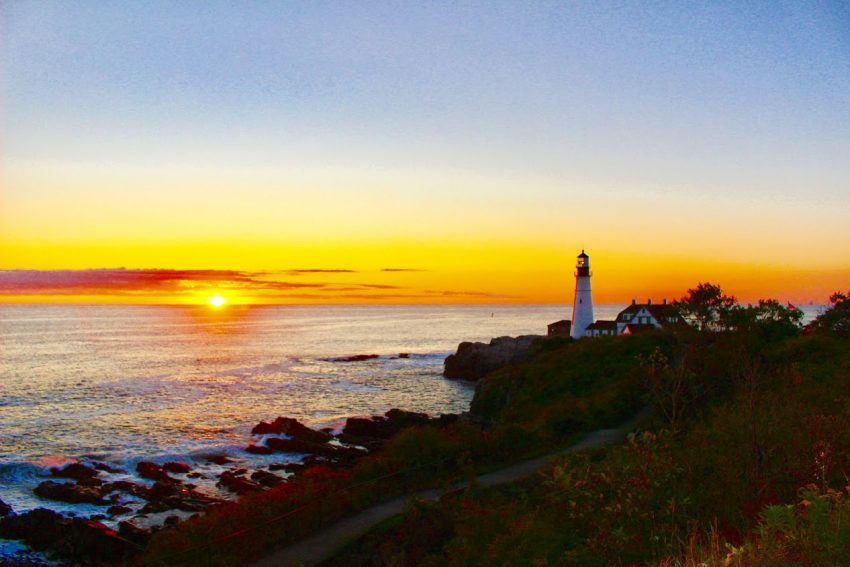 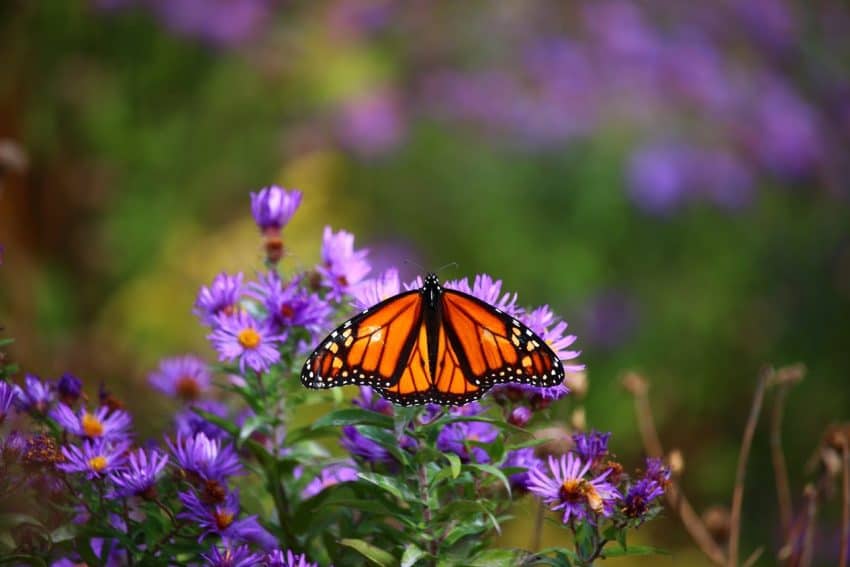 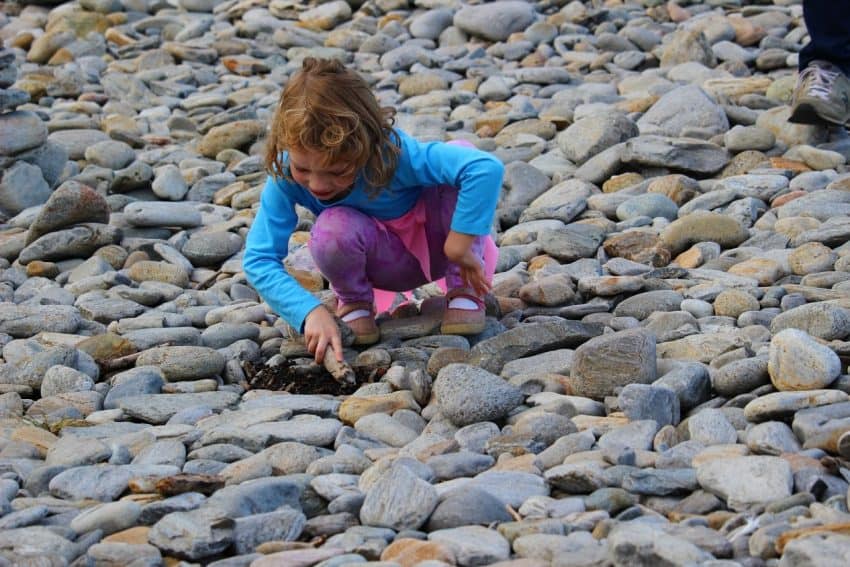 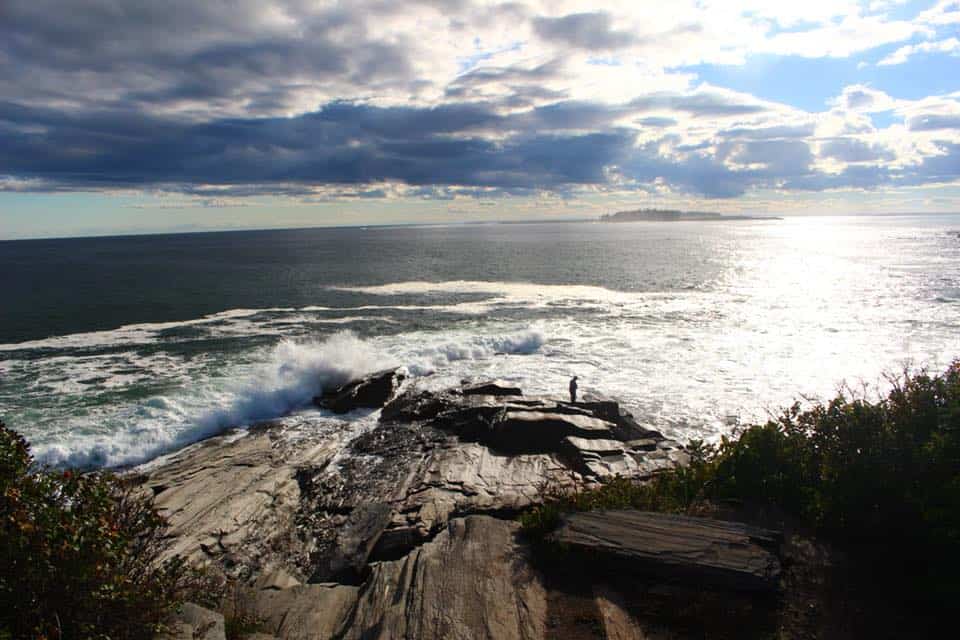 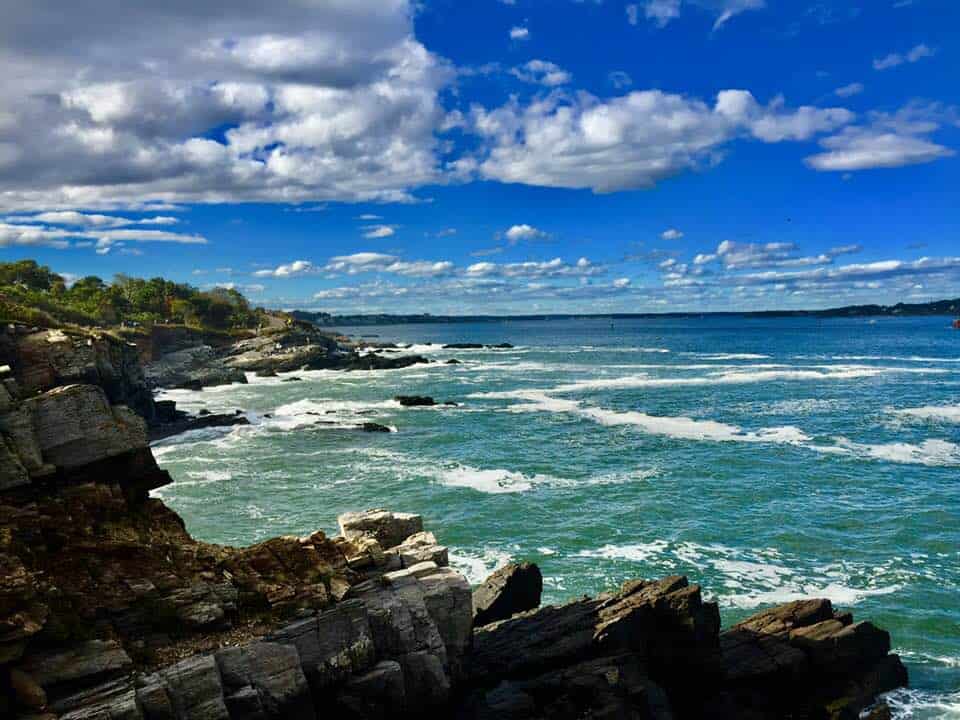 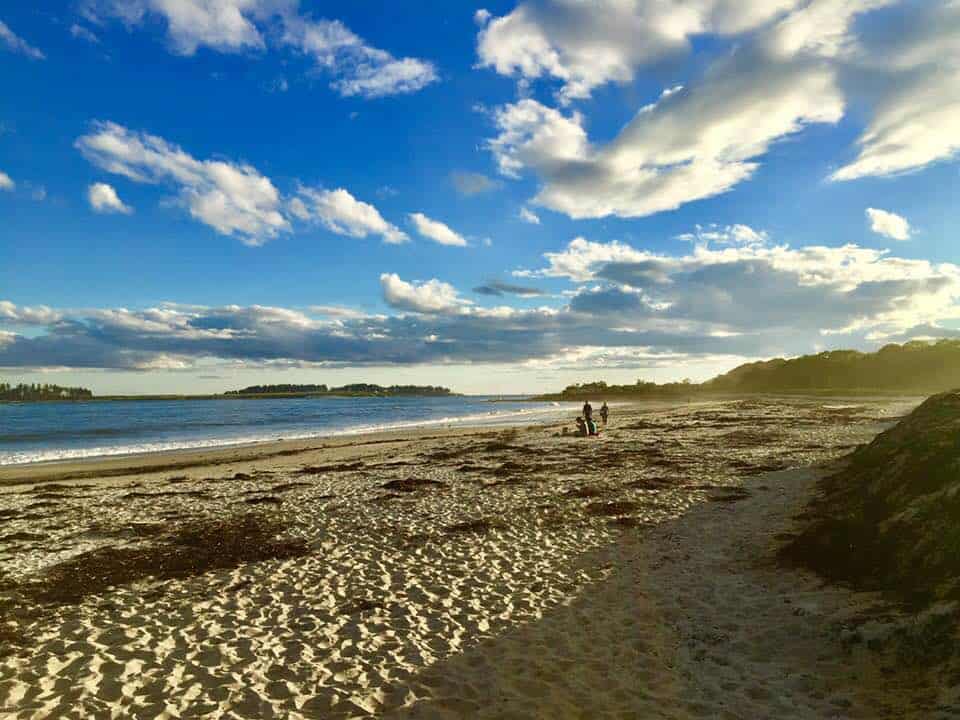 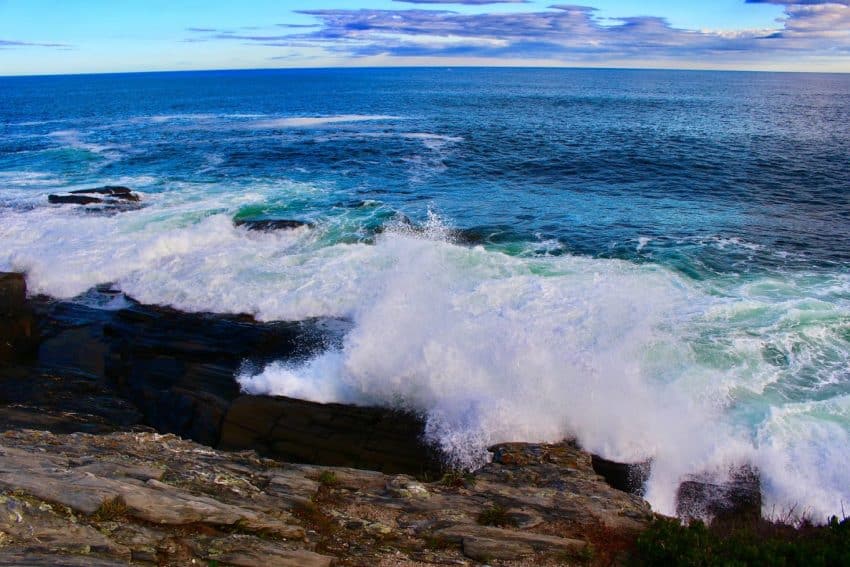 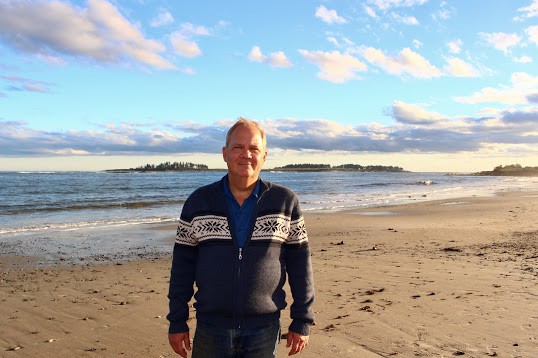 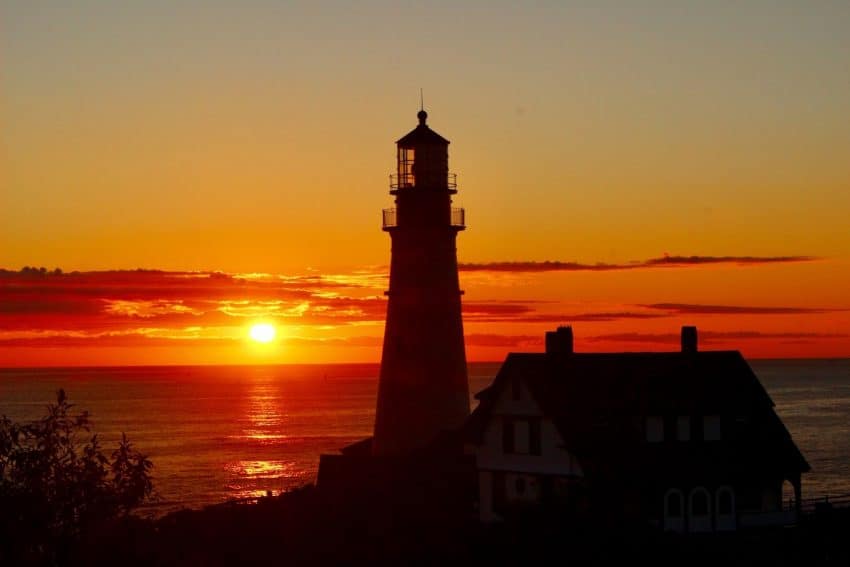 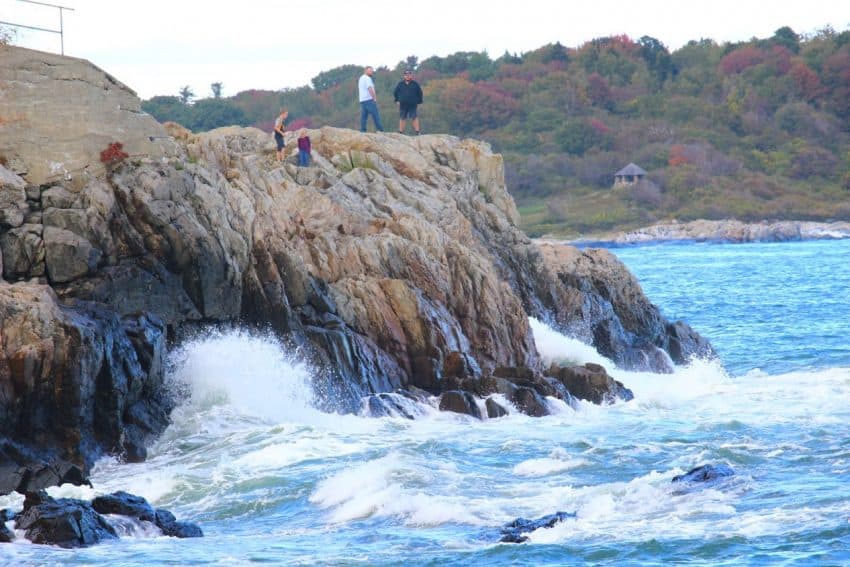 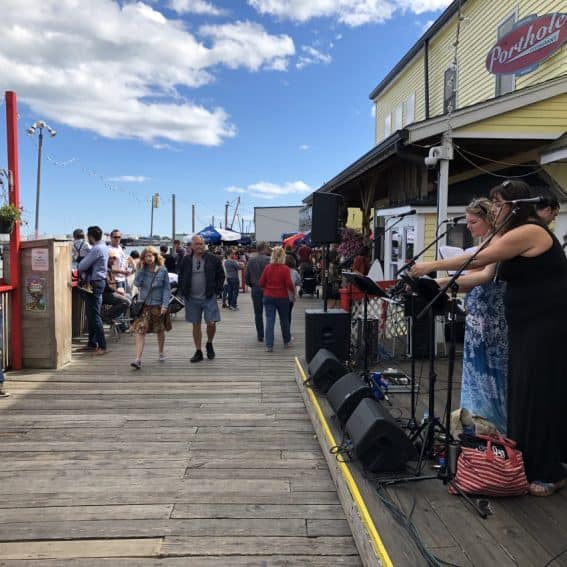 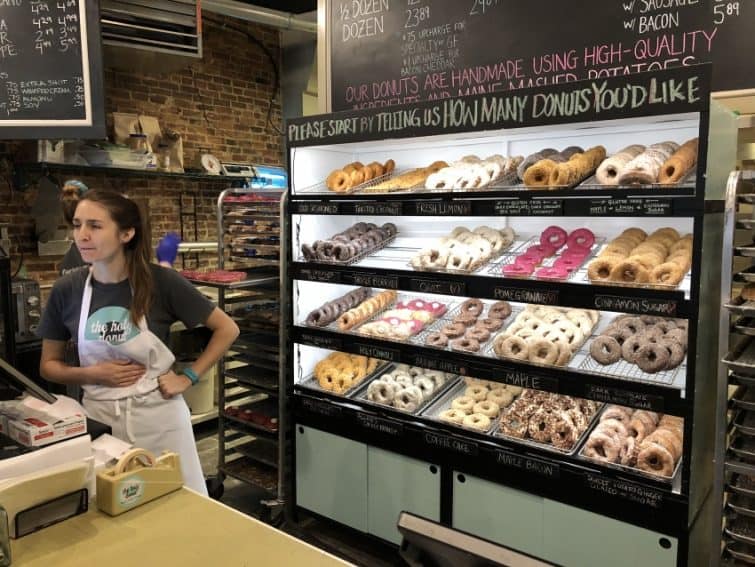 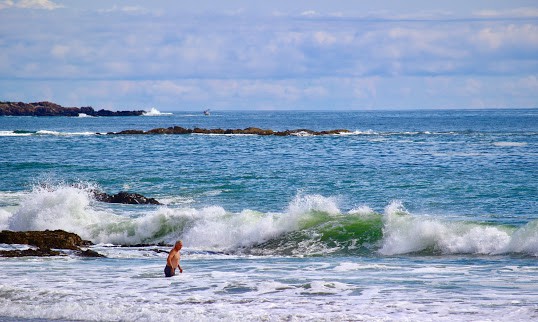 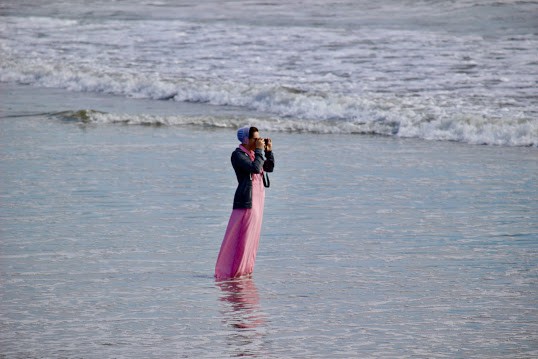 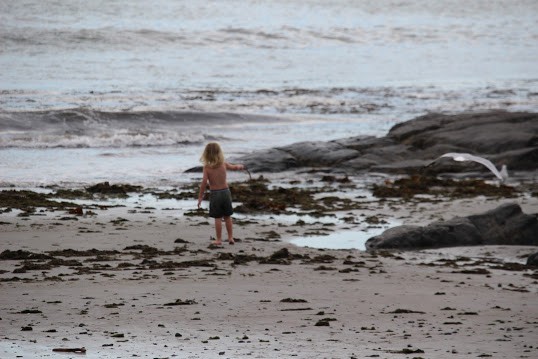 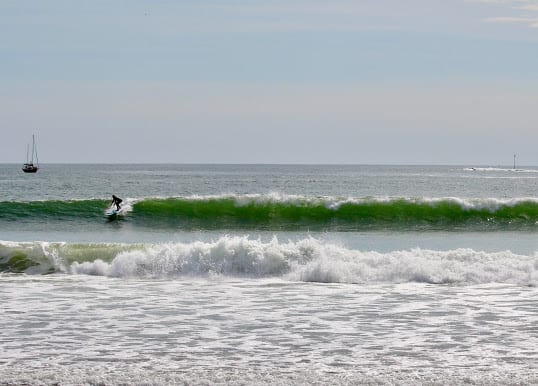 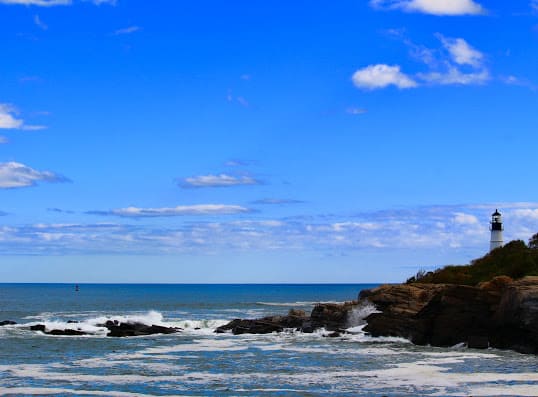 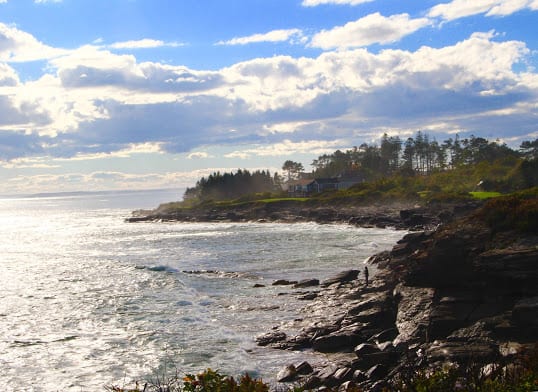 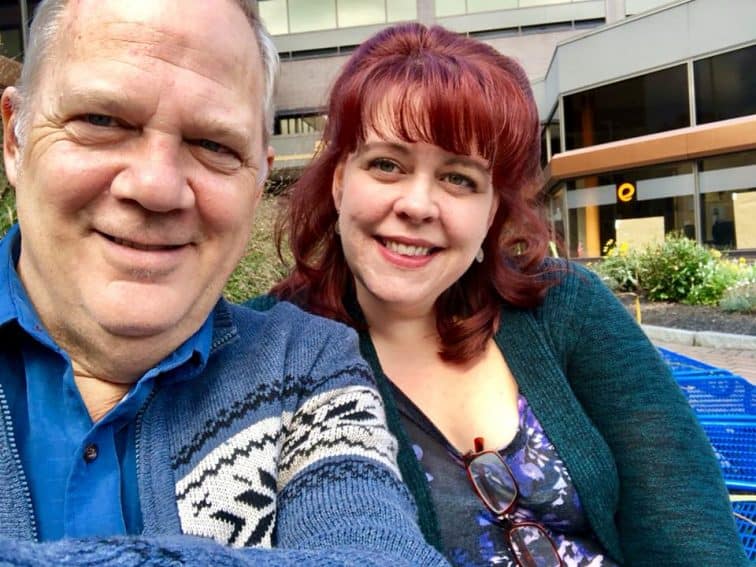