Georgia’s Contributions to the US Civil Rights Trail

Discover the history associated with some of the most influential sites in the Civil Rights Movement that revolutionized the entire social climate of the United States more than half a century ago.

The success of the Civil Rights movement in the United States was an incredible achievement that created a lasting impact on our nation.

It allowed for a plethora of important and necessary changes to the climate of our society that have served as crucial steps in the ongoing struggle to make the US a more equal playing field for all people, no matter their background.

This cultural and societal revolution gained considerable momentum due to the efforts of Dr. Martin Luther King Jr, a Georgia native whose writings, public speaking, and actions rallied the nation together in support for this noble cause.

King was born in Atlanta in a time when “The United States” was more of a misnomer than a truthful title, and it was in his home state where many of the most important events in modern American history took place.

Concentrated mainly in the regions of Albany, Atlanta, and Midway, many of these sites have recently been officially added to the United States Civil Rights Trail; a monument to the harrowing journey that was necessitated for minorities in America by the blind ignorance and hatred shown to them by their neighbors.

The US Civil Rights Trail is the product of the tourism departments of fourteen southern states working together to link several of the country’s most integral civil rights sites, it includes over 130 locations, each of which is a crucial point in the struggle for equality. 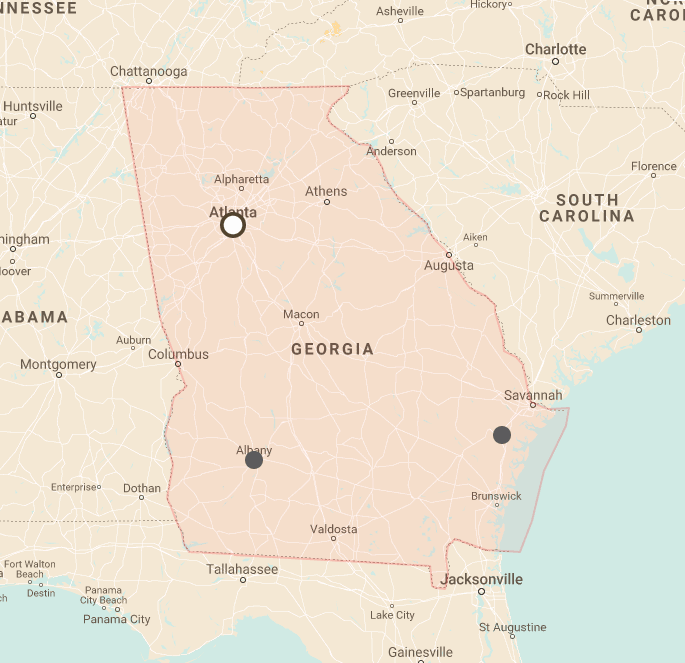 I recently spoke with Fran Folsom, a travel writer who traveled the entire portion of the US Civil Rights Trail in Georgia and was able to hear her take on the impact of the trail as someone who lived through the Civil Rights era.

According to Fran, experiencing the exhibits at locations like the National Center for Civil and Human Rights and the Albany Civil Rights Institute was extremely emotional, as they brought back memories of the grotesque treatment of people who only wanted the chance to be treated fairly and equally.

As someone who was born after the occurrences of all of these historic events, it was interesting to hear first hand from someone who could directly relate to and recall them happening during their lifetime.

Regardless of whether you can remember how this dynamic period unfolded, the US Civil Rights Trail serves as an incredibly important resource for education and remembrance of everyone and every event that served a role in the movement.

The recent addition of Georgia to the US Civil Rights Trail adds eleven important new stops to this impactful pilgrimage, and it is recommended to budget at least four days time to comfortably experience the entire stretch.

The Albany Civil Rights Institute is a museum and research center that also includes the rehabilitated Old Mount Zion Baptist Church, the once-home of the Albany Movement, a desegregation campaign in Albany that gained the backing of Martin Luther King Jr.

The Institute is home to several exhibits, interactive displays, a virtual history database and a resource library that shows what life was like in Georgia before and during the Civil Rights Movement. The museum is open from 10am-4pm on Tuesday-Saturday and charges a small fee for entrance.

Along with Mount Zion Baptist Church, Shiloh Baptist Church is considered the birthplace of the Albany Movement. It was here that Dr. Martin Luther King Jr. gave a speech on desegregation that attracted so many listeners that a single church could not hold everyone in the audience.

So King gave three speeches, one at Mount Zion, one at Shiloh, and one to an additional group that couldn’t find space in either venue. This historical church, where a crowd of about 1500 found gathered to hear Dr. King, is still active today and can be visited for Sunday service from 11am-1pm.

The African-American Panoramic Experience (APEX) Museum places emphasis on an extraordinary and surprisingly uncommon subject. The museum provides its visitors with the seldom taught histories of African and African-American culture. Constructed inside a 100-year-old building built by African-American masons, the museum holds artifacts spanning from ancient African civilizations to modern documents, as well as offering a variety of educational presentations. Their hours of operation are 10am-5pm on Tuesday-Saturday.

The Church is a part of the Martin Luther King Jr. National Historic Site, and in the early 2000’s, the Ebenezer Baptist Church was restored by the National Park service and remains a precious treasure to the surrounding community today. The Church is quite active, with over 6,000 dedicated members who serve and provide support to the Atlanta community at large.

The Elbert P. Tuttle United States Court of Appeals Building is a Renaissance Revival style courthouse which served as the seat of the 5th Circuit Court of Appeals. The Building’s claim to fame was the role of its judges in implementing the verdict of the vastly influential Brown v. Board of Education of Topeka, Kansas case.

This historical case made the state-sanctioned segregation of public schools a blatant violation of the 14th amendment, making any continued use of the practice unconstitutional. The Building now serves as the courthouse for the United States Court of Appeals for the 11th Circuit and is open Monday-Friday 8;30am-5pm.

This comfortable, two-story frame Queen Anne style served as home to Martin Luther King Jr. for the first twelve years of his lif

The house first belonged to the parents of King’s mother and when his parents were married, they lived there with them.

They remained home at 501 Auburn Avenue until King’s grandparents’ deaths in 1931, when his family decided to move out and maintain the property as a rental space.

The property served as the early headquarters for the Southern Christian Leadership Conference, which was a coalition founded by Dr. King and his associates on the basis of redeeming “the soul of America” through nonviolent resistance.

After King’s assassination, plans were made to have the property converted into a historic museum, and now you can take a free, first-come-first-serve tour of the house where Dr. King was born and spent the most formative years of his life on a daily basis between 10 am and 4 pm.

The National Center for Civil and Human Rights is home to several exhibits on both the historic Civil Rights Movement and the Modern Human Rights Movement. Here, you can be engaged by a combination of poignant imagery in the forms of art pieces and short films that tell compelling stories and artifacts relating to both historic and current struggles against oppression.

One of their most popular attractions is The Rolls Down Like Water exhibition, which is a multi-sensory experience that combines a multitude of sights, sounds, and interactive displays which work together to demonstrate how our country’s society was transformed after the Civil Rights Movement.

The Museum is open Monday-Saturday from 10am-5pm and Sunday 12pm-5pm and it is recommended to budget at least two hours to take in everything the facility has to offer.

The namesake of former US president Jimmy Carter, The Carter Center is dedicated to its commitment to human rights and the alleviation of human suffering. They are focused on fostering democracy and providing freedom to those held in unstable conditions, as well as finding peaceful solutions to conflicts that plague the people of our world.

The Center firmly believes that improvement of one’s own life is more than possible when provided with the necessary resources and knowledge to do so. Since its formation in 1982, the Carter Center has lead the charge on a massive amount of initiatives, accomplishing great feats such as nearly eradicating the Guinea Worm Disease, improving mental health care opportunities and reducing the stigma against those who suffer from mental illness, and diplomatically catalyzing peace in several countries worldwide.

Visitors can check out the Jimmy Carter Library and Museum, which often hosts temporary exhibits and book signings, Monday-Saturday 9am-4: 45 pm and Sunday 12pm-4: 15 pm.

The King Center is home to the largest source of information on Martin Luther King Jr. and the Civil Rights Movement in the world. It consists of an incredibly extensive library and research center, as well as the final resting place of both Dr. King and his wife, Mrs. Coretta Scott King.

The crypt was made of beautiful white Georgia marble to serve as a timeless reminder of their southern origins. Near the crypt burns The Eternal Flame, which serves as a symbolic and neverending tribute to Dr. King’s dream of a world where equality and peace for all people could become a reality.

The grounds of the King Center are dominated by a crystal clear, blue reflecting pool with gorgeous, spouting fountains and an island bearing the Kings’ tomb in the center. It is truly a sight to behold and can be visited seven days a week from 9am-5pm.

While this old, brick-made school dormitory may appear rather unassuming, the Dorchester Academy Boys’ Dormitory was the headquarters for some of the most important citizenship workshops offered by the Southern Christian Leadership Conference.

In less than two years, the SCLC trained 2,000 African-American people in necessary skills such as reading and math, as well as sections of state constitutions that would be crucial to their success in passing voter registration quizzes. The dormitory is open to the public and it includes an on-site museum which houses three large murals that celebrate its incredible influence during its existence.

Brian Gage is a resident of Amherst, Massachusetts and a lover of all things outdoors. He enjoys traveling to exciting new locations, attempting to take in the most beautiful natural sites he can see. He is an avid hiker and climber and can be found at the Hadley Central Rock Gym on many of his free days.