San Francisco: Things the Locals Love to Do

I was born in San Francisco and I love the City, even though it drives me nuts sometimes.

It’s overcrowded. It’s over-developed. It suffers from rampant homelessness. And that’s just my shortlist of complaints.

Still, like I said, I love San Francisco. And there are plenty of things I love doing (and recommending to others) in the City by the Bay. Here are some ideas for starters:

Take a ferry to Angel Island to enjoy its natural beauty as well as to visit the U.S. Immigration Station, a moving, inspirational, and at times heartbreaking museum dedicated to telling the powerful stories – many of which were tales of hardship.

The Presidio: From Swords to Plowshares

Hundreds of thousands of immigrants passed through this building from 1910 to 1940 on their way to a new life in America.

If you’re a book lover, drop by City Lights, one of the world’s great independent bookstores, and then cross Jack Kerouac Alley to Vesuvio Cafe, where you can get started on your newly purchased literary delight while enjoying a mug of coffee or glass of wine.

I also recommend visiting Fort Point, originally built during the California Gold Rush as a deterrent to a naval invasion.

While visiting the National Historic Site, you can stare up at the red-orange underside of the Golden Gate Bridge and stand on the spot where Jimmy Stewart dove into the frigid bay waters to save Kim Novak in Hitchcock’s Vertigo.

Yes, there are many great things you can do in San Francisco, but the one thing I recommend above all else is getting in your car – because surely you must have a car in these days of “Autogeddon,” right? – and drive to Ocean Beach.

That’s right, go west, young man or woman, for a day in San Francisco away from the crowds and the congestion.

Before jumping on the Great Highway, the sandblasted three-mile stretch of roadway that runs alongside Ocean Beach, I suggest driving a short distance south on Skyline Boulevard to Fort Funston. It’s a mecca for hang gliders and dog walkers.

It’s also a beautiful windblown spot for standing on the bluffs and taking in the glory of the Pacific Ocean. Walk along the cliffs, either on the paved trail or on paths cut through the invasive ice plant.

If you’re up for a more strenuous hike, descend the steep staircase to the left of the hang glider launch area to get down to the beach. It’s not so bad going down but coming up can be a doozy.

Fort Funston takes its name from General Frederick Funston, the man in charge of relief efforts after the 1906 earthquake.

The army had originally purchased the land in 1900, establishing a small outpost for coastal defense.

The military presence ramped up along this section of the coast during both the first and second world wars.

Today, you can spot the remnants of concrete bunkers that once housed massive guns designed to protect the city from invasion.

From Fort Funston, head north for the Great Highway. I recommend pulling into the first parking area. You’re bound to see joggers, walkers, surfers, and others enjoying the sea and sand. The surfers will be wearing wetsuits (unless they’re crazy).

The water temperature at Ocean Beach ranges from about 50 to 63 degrees Fahrenheit, depending on the time of year.

Okay, that doesn’t seem so cold until you dip your toe in the water and feel the chill. Look to the north, toward the far end of the beach, for a view of the Cliff House (if the fog isn’t too thick).

One thing to note about Ocean Beach is that you won’t see many people in swimwear catching rays or frolicking in the waves.

Between the typical wind, fog, and cold water (not to mention a treacherous undertow), you’re more likely to see people bundled up in parkas than hanging out in shorts and bikinis. It all adds to the unique charm of this part of the California coast.

When you leave the Beach Chalet heading north, you’ll see a large windmill on your right. It’s one of two windmills in the area – you might have spotted the other one a few minutes earlier on your drive along the Great Highway.

Built in the early 1900s, the windmills were used to irrigate Golden Gate Park, an incredible manmade park that was grown on sand dunes in this area once known as “Outside Lands.” Both windmills fell into disuse and disrepair over the years but were eventually renovated and serve now as scenic landmarks.

Back in the car, continue along the Great Highway. You’ll eventually come to the Beach Chalet Brewery and Restaurant.

Originally opened in 1925 as a restaurant and place to change into and out of beachwear, the Spanish-colonial style structure remained shuttered for many years before undergoing renovation and reopening in 1996.

If you’re in the mood for a local beer and a bite to eat, head upstairs to the restaurant and cross your fingers that they’ll have a window table available for you to stare out at the ocean while enjoying your meal.

Take some time to admire the stylish murals on the ground floor. Painted by Lucien Adolphe Labaudt in 1936 as part of a Works Progress Administration (WPA) Federal Arts Project, the restored murals depict San Francisco scenes from the 1930s.

The Great Highway turns into Point Lobos Avenue as you wind your way up the road toward your next stop, Lands End. If you haven’t eaten yet, you can stop at the pricey Cliff House, though the neighboring Louis’s Restaurant is more my speed.

Maybe that’s because I have fond memories of frequenting Louis’s with my Lola when she was craving a chili dog and coffee. It’s the perfect spot for looking out at the Sutro Bath ruins below, Seal Rocks, and, on a clear day, the Farallon Islands.

You can hike down to what’s left of Sutro Baths. Opened in 1896, the iron-and-glass building once housed the world’s largest indoor swimming pool complex, featuring six saltwater pools of varying temperatures and one freshwater pool.

I’m too young to have visited the aquatic complex while it was still in operation, but my Lola, while enjoying her chili dog at Louis’s, would regale me with tales of spending the day at the baths.

I enjoy walking amidst the ruins and imagining the bathers going from pool to pool at this haunting location at the edge of the Pacific.

The baths closed down after a terrible fire in 1966. There was once a tramway that went from the Cliff House to the Baths.

If you’re game for another short walk, follow the trail from the Lands End visitor center parking lot as it takes you under wind-bent Cypress trees and curves around Lands End for a spectacular view of where the ocean meets the San Francisco Bay. Chances are that it’ll be windy.

And it might be foggy and misty, too. Keep walking, however, and you’ll be rewarded with a picture-perfect view of one of the world’s most iconic sights – the Golden Gate Bridge.

After a day of exploring all that Ocean Beach and its environs have to offer, you’re recharged and ready to tackle the City’s more crowded and congested destinations.

Sure, I love San Francisco – just keep me away from Fisherman’s Wharf. 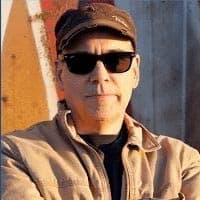