My husband Kent and I are ‘chocolate on your pillow’ kind of travelers. 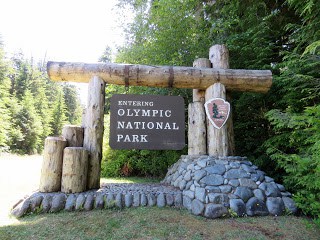 When my outdoorsman brother, John, coaxed us into coming along for a hike through the Hoh Rain Forest, we demurred. But then, how hard could it be? (The town of Forks and civilization was only an hour away).

We were advised to just take a water repellant jacket and some edibles. As eateries are far and few between, we grabbed a few AlmondJoys. No backpacks for our gang, justsneakers, and jeans.

But, first things first. John led us to the Hoh Rain Forest Visitor Center,a great place to start, especially for us tenderfeet. The staff explained what makes this area so special. Hoh Valley looks much like it has for 5,000 years.

Another astonishing fact…trees can reach up to 312 feet or more and be a whopping twenty-three feet in diameter.

The rangers pointed us to two short nature trails that looped through the forest near the Visitor Center — the Hall of Mosses Trail (.8 miles), and the Spruce Nature Trail (1.2 miles).

We chose the Spruce Nature Trail. It was level, easy to navigate and would lead us to the Hoh River. Both trails, we were told, were suitable for all age groups and were well marked with signs.

An entrance sign informed us that the dominant tree species are Sitka Spruce and Western Hemlock. Coast Douglas Fir and Big Leaf Maple are close behind. These trees help to prevent soil erosion. (Ah, we were becoming experts).

As we moved along we began to realize that the Hoh Forest area is certainly a gift of nature, with its ocean, (the Pacific) its river, (the Hoh) and its mountains (the Olympic Range)

It was not hard to understand why trees grew so tall when it rains one hundred-forty to one hundred- seventy inches a year! I grew up in nearby Tacoma. It rains there but…! Mild winters and cool summers also help produce these giant trees.

We felt very small as we meandered through,dry leaves crackling underneath our sneakers.The atmosphere was rather eerie with the giant moss-covered entrails casting shadows throughout the forest. The hangingmoss eerily took on shapes. Branches, covered with moss and ferns, grew out of tree roots.

The dangling drippy mosses and a gazillion shades of green made us feel like we were in prehistoric times.

Tree roots popped up from the ground so high, we could (with a little stooping) walk under them. John commandeered a few other hikers to see how many of us it would take, holding hands, to completely wrap around a tree. It took seven.

The forest floor, the bottom-most layer, receives very little sunlight. Only plants, used to low light like mosses and ferns can grow here. Dead and downed trees decay slowly, we were told, and support new life. These are called, “nurselogs”. Fungi are very common as they feed on the decomposing remains of plants and animals.

Surprisingly, we found out that the soil in a rainforest is very poor in nutrients. This is because the nutrients are stored in the trees and plants rather than in the soil. Tree roots bind the soil together, while the leaves protect the soil from heavy rains.

We kept hoping for an elk to wander through as they are supposed to be very common. (4,000 to 5,000 of them call the Olympic National Park their home). Alas, this was not our day.

The Hoh River lay ahead. (It is not surprising that rivers are often found running through rain forests.)

We could hear the river before we reached it. And then, there it was in all its wild beauty. It was summer so it was runninghigh with glacial meltwater. Dead trees had fallen creating quiet pools for salmon.When these fish die, their bodies feed dozens of water and forest animals and fertilize the soil.

Unfortunately, rainforests are becoming smaller. They used to cover 14% of the Earth’s surface, but due to tree loss, now they only cover around 6%.

Well, now that Kent and I are seasoned hikers, we will up the ante. The Hoh Rain Forest has a campground that is open year-round, with 88 sites. A possible overnight trip?

Or, we could try, the Hoh’s major hiking trail, the Hoh River Trail, which leads 17.3 miles to Glacier Meadows, on the shoulder of Mount Olympus. It’s on our list!

The visitor center is open daily during the summer, closed December through early March, and generally open Friday through Sunday during the spring and fall seasons (hours may vary according to the season.)

Camping is $8. night per person, no fee for children under fifteen.

Other places to stay…Forks is less than an hour away.