Paris Catacombs: An Underground Guide to the City of Lights

Down and Out Underneath the City of Paris in the Catacombs 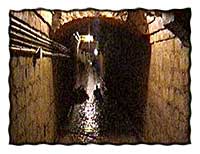 When the Romans conquered Lutetia in 52 BCE, it pretty much put an end to the need for explorers along the banks of the Seine.

By the time the City of Lights had earned Walter Benjamin’s celebrated epithet “Paris, capital of the XIXth Century,” the age of travelers had expired, only to be replaced by the throngs of gawkers captured in Lumiere’s images of the Universal Exposition of 1900.

Does this mean there is nothing more to explore in Paris? Hardly. Just go underground.

The best way to avoid the trite and superficial perception that most tourists receive from the city is simply to plunge in. And you can’t get further in than by taking a trip through the sewer system.

Beneath each street in the city is a sewer pipe of the same name. Really, the trip is a wonderful experience: it doesn’t smell, but strapping, healthy rats do scurry around quite shamelessly; and of course, you can’t visit during or immediately after heavy rainstorms.

Waste is a fascinating subject and the Cartesian approach of the engineer Belgrand is well explained during the tour, available at least once every day in English. Departure is from a manhole at the Pont de l’Alma, though tickets are to be bought at the museum/boutique on the Place de la Resistance.

Still pursuing this underground view of France’s capital, you can go to the Place Denfert-Rochereau and take a tour (available in English) of The Catacombs (open every day except Monday). This visit is shorter than the trip through the sewer (only 45 minutes) and even more gothic — the ossuary of Denfert-Rochereau is the world’s largest underground necropolis, containing some six million skeletons in a space of about one hectare.

In the short time, you are underground, you won’t be covering much of the 250 kilometers of galleries and tunnels which were excavated essentially as quarries — the Louvre, for example, is built from Parisian limestone. But you will get some glimpses of French history as the guide explains when the underground streets were used, who carved the graffiti, and why all those bones are there.

For those with claustrophobia, it is quite possible to get an aerial view of the city without standing in line at the Eiffel Tower or having a mediocre meal at the restaurant on top of the Tour Montparnasse. If you are willing to pay for the privilege, one of the most elegant look-out spots is the penthouse terrace of the Raphael Hotel (on Avenue Kleber), where you can have a cocktail amidst the potted plants and look over the rooftops of the 16th arrondissement.

But some people are convinced the best things in life are free, so if you want a no-frills look at the city, wait for La Samaritaine, the famous department store facing the Pont Neuf, to open and then go straight to the elevator and ride right up to the roof: the view is terrific.

Once you’ve assessed the general topography, the best way to understand and appreciate the diversity of the visual riches of this city is to walk everywhere. For this, all you need is the indispensable Paris par Arrondissement, a pocket-sized book with a street index, and individual neighborhood maps.

Though it does show every single avenue, street, alley, mews, and dead end of the city, its coverage is limited to “Paris Intramuros,” or the area that used to be within walls and is now limited by the notorious “Peripherique” — 35 kilometers of beltway which circles the city and keeps the 14 million inhabitants of the greater Paris area from encroaching.

No matter what your vehicle, you will have great difficulty circling going around the loop in 11 minutes and 4 seconds, the record set by the unidentified motorcyclist known as the “Prince Noir.” Indeed, you might take as long as five hours, since recent years have seen the “Perif” used more and more frequently as a political battlefield, with the bottleneck as the decisive weapon.

Last October 18th, the city was virtually besieged by the 24 trucks and 70 vans driven by disgruntled union members of a public works company who managed to create a traffic jam 180 km long.

Getting Around in the Catacombs

This is a good reason to take underground transportation to and from the outlying airport. The express metro line which ends precisely at the Charles de Gaulle airport in Roissy is the subject of Francois Maspero’s “Les Passagers du Roissy Express” — the length of the “B” line of the RER (Reseau Express Regional).

He journeyed with only a backpack, a diary, and some maps, and made a detailed visit of one station and its neighborhood each day.

His published chronicle is both a fascinating sociological study of the city which no tourist ever sees, and a lucid indictment of the policies — the creation of the beltway, the lack of public transportation, the systematic displacement of public housing — which have kept Paris so beautiful and made its periphery so filthy, poor, and wretched.

Of course, there are also beautiful sites, fascinating historical monuments, and charming villages as close as 15 kilometers from the city center. But the Michelin “Green” guide will tell you all about them. We want to tell you about the alternatives. And to get you there in an alternative manner. You will need the suburban train schedule, which you can purchase at newsstands in the train stations, and proper maps.

It is still as hard to find a local map of a Paris suburb as it was to obtain maps in communist countries before the Berlin Wall came down. Though many working-class suburbs still vote “red,” one hesitates to believe that this is the explanation. In any case, you can solve the problem by acquiring the “topo-guides” published by the Federation Francaise de Randonnee Pedestre at ffrp.asso.fr. These guides will help you navigate the confusing suburban sprawl.

Underground Outside of Paris

Two gruesome but interesting sites are located in diametrically opposed (socially, as well as geographically) suburbs. In Maison Alfort, southeast of Paris, the Musee Fragonard contains neither paintings by the 18th-century master Antoine Fragonard nor scents by the celebrated perfume manufacturer of the same name.

The museum belongs to France’s biggest veterinary college and houses an incredible collection of bottled, stuffed, dried, and otherwise preserved specimens. The most famous artifact is the “ecorche” rider (flayed of his skin to reveal the anatomical structure) and his flayed horse trotting off into the vitrine followed by three flayed human babies in postures that one must suppose seemed “cherubic” to the keeper of this collection.

On the western side of the city, in the upper-class bedroom community of Saint Cloud, you can walk to the Mont Valerien and take in, when the weather permits, a fine view of Paris with the Eiffel tower proudly in center frame. The site first became popular in the 17th Century when a chapel was erected and symbolic Stations of the Cross were placed along the way for pilgrims.

An American military cemetery with tombs from both world wars is also on the grounds. But the hill obtained its greatest notoriety between 1940 and 1944 when the Germans made frequent use of the slopes to shoot members of the Resistance. Over 4000 men were martyred, and a huge memorial of dubious aesthetic merit erected in 1960 commemorates these terrible days.

For those who want to pursue the underside theme in their choice of lodgings, it is possible to one-up George Orwell’s experience of being down and out in Paris by staying in a place that is funkier than any flea-bag hotel. Those who really want an urban adventure can start by staking their tent in the municipal campgrounds in the Bois de Boulogne.

There seem to be a lot of unwritten rules about where you can set up, since most of the inhabitants are actually long-term residents. You might recognize some of them panhandling on the metro, but many of them are Eastern Europeans who have come to work clandestinely in the building trade. Beer or wine to share will certainly help make your neighbors friendly. Just remember to keep your cool; or as the French say “gardez votre sang froid.”