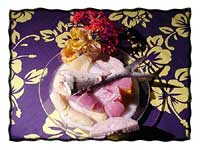 The Lady and the Monk: Four Seasons in Kyoto
Pico Iyer

Pico Iyer, author of Video Night in Kathmandu and one of the best travel writers out there, attempts to pursue a longing he’s had since childhood and embarks on a journey to spend a year in Japan.

Though his original goal was to study Buddhism and learn to empty his ever-racing mind, his enlightenment is derailed by an improbable relationship with Sachiko, a young, married mother of two with an absent husband and aspirations of freedom from the rigid constraints of Japanese life.

As their tentative relationship develops, Iyer becomes her savior and she, his muse; and the book is transformed from a simple travel narrative to a tender, unintended love story as Iyer wrestles with spirituality, culture, language, and love.

Between typically erudite ruminations on Japanese literature, Western spirituality seekers, American pop culture and the inadequacies of language, Iyer paints haiku-like portraits of the changing seasons and landscapes of Japan.

In the course of his wanderings through ancient alleyways, temple gardens, shopping malls and the secret world of the Geisha, he also introduces us to some wonderful, eccentric characters from oh-so-chic Japanese charity women to failed Buddhist monks.

But his main character is Sachiko, and through her struggle to break free from binding tradition, he offers an engaging portrait of a country at a crossroads between the past and the present.

Iyer never achieves enlightenment: Buddhahood is hard to attain for even the most dedicated, but even harder when distraction takes the form of a disarming and charming woman. Yet, Iyer’s dilemma mirrors the classical Japanese literary theme of the lady and the monk, each tempting the other away from the path to which they are ascribed. And Iyer’s metaphor is an apt one: not just for Iyer and Sachiko, but for modern Japan as a whole.  The Lady and the Monk: Four Seasons in Kyoto

Born in St. Kitts and raised in England, Caryl Phillips is a true islander. But The Atlantic Sound is not a book about island life; it is a book about the relationship between islands, particularly between the isle of his birth and the one that begrudgingly adopted him.

Part travel narrative, part historical investigation, part social commentary, the book’s impetus is the story of Phillip’s parents’ — and his own — emigration from the Caribbean to the UK. But between the lines of that story, Phillips delves into the roots of the slave trade and the “triangle” that united Africa, the Americas, and England.

The result is a deeply elegant, profoundly moving journey across the troubled waters between Mother England and her far-flung, dark-skinned children.

Race and history are themes Phillips — an Oxford-educated scholar — has explored in his other novels and non-fiction, most notably The Nature of Blood, a finalist for England’s prestigious Booker Prize. But Phillips is no whiner; instead, he dissects this dark past with a surgeon’s eye, a journalist’s mind, and a poet’s pen, refusing to play victim, but also refusing to let the victor rest on her laurels.

This is no easy task, and The Atlantic Sound, perhaps his most intimate and scathing book, plumbs the depths of the ocean between the colonized and colonizer, the white man and the black, history and its impact on the smallest island — the individual. The Atlantic Sound

Running in the Family
Michael Ondaatje

In another unusual travel/memoir by a well-known and much-awarded novelist, Michael Ondaatje, the author of The English Patient, turns his highly detailed eye to his childhood home, Sri Lanka (Ceylon), and offers a magical portrait of a bygone era in this island nation’s history.

Spurred by “the bright bone of a dream” about his dead father, Ondaatje reluctantly leaves his home in Canada to return to Sri Lanka for the first time in decades, haunted by the need to hunt down the remains of his family and his roots. What he discovers is not only a rich tapestry of eccentric characters, lush landscapes and colorful history but also another side of himself that he never could quite grasp or accept before.

Told in a series of journal entries, scrapbook pieces, snippets of conversations and half-recalled family memories, Running in the Family is stylistically akin to Garcia Marquez’ magical realism and offers everything a good book should: epic struggle, romance, humor, history, insight, and honesty.

As we traverse time and space through Sri Lanka’s fading hill stations, beaches, cities and tea farms, we reconstruct Ondaatje’s parents’ meeting, courtship, volatile marriage, divorce and, ultimately, his father’s death. In so doing, we also gain intimate glimpses into the island’s history, landscape, and people.

Like the best travel — and travel writing, Ondaatje is transformed by what he encounters. In reconstructing his dead father — a tortured, but gentle drunk, unpredictable, and prone to wild flights of fancy and action — he finds himself. And while he is not calmed by what he discovers, he is relieved; at least he knows that it runs in the family. Running in the Family

The Happy Isles of Oceania: Paddling the Pacific
Paul Theroux

Though he’s loath to admit it, Paul Theroux likes to dislike things. Not just little things, but things that most of us, without question, adore — like tropical islands.

Running away from a failed marriage and loads of self-loathing, Theroux embarks on an intense, penitent journey to paddle his way through the islands of the South Pacific — from New Zealand to Hawaii, 51 islands in all. In so doing, he enters what — for most of us — would be pure paradise.

But for him, floating among pristine atolls and palm-strewn beaches is pure hell. In the islands Theroux visits, the French are “crude,” the islanders are “lazy,” other travelers are insufferable, the cities and beaches are filthy, and frankly, he is miserable.
Though it’s fun to agree with him as he disses the tourists in Hawaiian print shirts, it’s hard to listen when he bad-mouths Fijians and other locals. Generally, it seems like he’s having one hell of a bad day: the islands can’t be this awful; he should just get over it and enjoy himself.

But Theroux refuses to get over it, and in all his complaining he stumbles across some interesting ironies about paradise. His fantasy islands aren’t picture-postcard idylls of romance, happy faces, and clear-blue oceans; they are poverty-stricken, over-colonized, over-developed, corrupt and rife with environmental and cultural desecrations. While his frightful images may be painted with bold strokes, we have to admit, sadly, that he’s right.

Of course, we tend to overlook these realities because we want paradise to be as it appears in the airbrushed travel magazines. But Theroux refuses to let us, or himself, off the hook so easily. And while at the end of the journey, he discovers that there is no such thing as paradise, he also learns that heaven and hell — and islands — are what you make of them.

The Happy Isles of Oceania: Paddling the Pacific