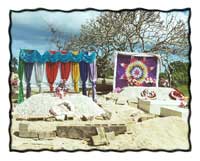 Taking a Shot at the King of Tonga

A palace guard came curiously over to me, armed with more questions about my visit to Tonga than bullets for his rifle. I fired back some pleasantries and then, to my delight, he announced that the king would be taking a stroll in the garden at four o’clock.

I filled the thirty-minute wait with an appreciation for the one hundred thirty-year-old timber Victorian prefab house from New Zealand. Then, like clockwork, King Taufa’ahau Tupou IV appeared in his royal regalia: a white t-shirt, blue shorts, and running shoes. Click, click, click. I was a paparazzo, shooting the King of Tonga.

My distant glimpse of the royal walk (more of a shuffle, really) was on my first day in The Kingdom of Tonga (Tonga means “south”) and was to be only the first of many wonderful and odd moments. The kingdom’s diverse 171 islands are situated a degree or two to the west of the international dateline and just north of the Tropic of Capricorn.

The unique location makes it one of the first countries in the world to greet each new day, not to mention that Tonga was one of the first nations to embrace the new millennium (which was the first time many people had ever heard of this island nation).

From the air, the island world is a string of emerald nuggets placed upon a turquoise table. From ground level, it is a land of smiling villagers exhibiting their pearly whites. Even famed captain James Cook noted the inhabitants’ affable disposition in his 1773 sojourn here, bestowing the name “Friendly Islands” upon them. The moniker, however patronizing, has stuck to this day.

Still, clichéd though it may be, the friendliness of these isles came to me in many guises: a pedestrian’s greeting; children’s frenetic waves from a passing school bus; a free apple from the market seller; an offer for a lift from a passing car; village women inviting me in to watch them pound out a tapa cloth; and the utter hominess of the place.

Yes, these are commonalities most travelers encounter in non-Western nations, but in Tonga, even fellow travelers seemed disproportionately mirthful.

But, the most unexpected show of hospitality I met was given by a village in the middle of a funeral service. Whilst the men sat crossed legged and silently in neat rows, ceremoniously washing and passing bits of black volcanic rock in leaf woven baskets, the women busily gabbed and virtually demanded to have their pictures taken. I obliged them. Apparently, even dirges don’t get Tongans down.

Tongatapu, the island kingdom’s main island and home to two-thirds of the nation’s 98,000 souls, is pancake flat yet steeped in history, tradition, and serendipity. The island has been the administrative center of the country for more than 600 years.

Evidence of this is found in Lapaha Archaeological Site, where 28 langi, or burial tombs, remain. Their sacredness forbids excavation, however.

The bustling capital of Nuku’alofa, meaning “abode of love,” was founded as a fortress. Today, it is still quite the big city for inhabitants of surrounding villages and outlying islands. As the nation’s center of government, industry, and transport, Nuku’alofa is forever expanding in order to meet the growing numbers of residents migrating here in search of jobs.

The growth, however, has encroached upon villages, arable land, and wetlands, making for quite a disturbing sight and smell of filth at numerous landfills. Some are said to be toxic. Another problem in Tonga are rising sea levels, which may put the nation underwater in the late 2000s.

Whilst Tongatapu, with few idyllic beaches and the hubbub of its capital, is not one’s brochure-like vision of the South Pacific, Tonga’s outer islands certainly are. Some sights on the island, however, are remarkable must-sees, like Lapaha.

If the vigor of the blowholes fails to lift your spirit, perhaps the natural coral bridge of Hufangalupe will. The view of the restless ocean 30 meters down is arresting. But if the raging sea proves too much, try the tranquility of Captain Cook’s landing place in Mu’a (Queen Elizabeth II did); the mystery of the Ha’amonga ‘a Maui Trilithon, an 11th century arch of three large coral stones, each weighing some 40 tons; the sacred Flying Foxes (bats) in the village of Kolovai; a Sunday church service for some wonderful singing; or a drive through a village.

A village visit will be instantly rewarded, provided one understands Tongan life adheres to a strict social hierarchy and codes of behavior, known as faka Tonga, the Tongan way. The apparent disorder of Nuku’alofa is hardly the way for life elsewhere. Tongan social hierarchy places God at the top, followed by royalty and nobles, high commissioners, politicians, religious leaders, and lastly, a patriarchal led family rank for the commoners.

Rules of social protocol stem from respect for this hierarchical order, influencing language, gift-giving, honor, stature, and duty. In extreme circumstances, where shame or loss of face weighs too heavily upon an individual, suicide is the result. But about all the traveling visitor needs remember, is that a clean, properly attired appearance is a welcomed sight.

Each village is colored by its residents, of course, but the ubiquitous washing line waves a banner of myriad hues. Churches are generously painted, neatly trimmed in whites and blues. Woven pandanus mats and ngatu, elaborately decorated tapa, can be seen pitched across lawns to dry amid meticulously-groomed gardens with the burning reds of hibiscus and Flame Trees.

Villages are places of constant activity where a feast is in the preparation or the mallet tapping of tapa, the underbark of the mulberry tree, is never far from earshot. Squealing kids can be seen chasing mud-caked pigs; chickens caw all the day through; and dogs laze about, resting up for a midnight wrestling match. For sure, a Tongan village never really sleeps.

When they are not sleeping, the Tongans eat. To be fair, they do not gorge themselves daily with wild abandon, but it is a sad fact that many Tongans, as do other Polynesians, have a constant battle with their bulge. In a country where food readily grows in front of the house and sleeps under it, it’s not surprising the Tongan feast is an event not to be missed.

Visitor and Tongan alike can tuck into the all-you-can-eat chicken, pig, fish, taro, cassava, yams, breadfruit, coconut, and fruit somewhere on Tongatapu every night of the week. It’s a gastronomical extravaganza. It is no wonder really that the King was once the world’s heaviest monarch, topping the scales at over 200 kilograms (440 pounds).

To His Majesty’s credit, however, he has removed himself from the one-time dubious distinction by losing as much as 80 kilograms through a strict diet and regimen of exercise, setting a fine example for his subjects, now dieting in droves.

And, so it was that I should see the King in his palace garden, shedding a few more ounces off his 81-year-old bent frame. I wanted to cheer him on — blurt out a word of motivation –, but feared I might be hustled away. But by the time His Highness got close enough to hear me, the exercise was over and he was already sitting down on his royal chair. For all I know, he was checking with his aide-de-camp that the dinner menu was indeed fit for a king.


Visitors are usually bewildered by the site of Tongan graves. Non-Catholic plots are decorated with all the gaudy kitsch of a traveling fairground. Sandy mounds topped with decorative banner-like blankets, artificial flowers, photos of Jesus, shells, black volcanic stones, and inverted beer bottles appear arbitrarily along roadsides in and around villages everywhere. These gifts are to be used by the deceased in the next life.

Gift giving is an integral part of the Tongan funeral. The body lies in an open casket the night before burial. Friends bring mats and tapa, and money to help pay for the funeral. In return, the deceased’s family gives gifts of food, usually beef, pork, and yams. The occasion is marked with song and prayer and is generally upbeat in the mood.

Everyone in the extended family has a role to play, particularly the Fahu, or matriarch. Whilst the paternal side leads the proceedings, the maternal side prepares a meal for the guests. Everyone dresses in black and wears their best ta’ovala, a woven pandanus mat worn around the waist. They may dress this way for periods as short as a few days to as long as several years, depending upon the relationship to the departed.

After a period of respect, the ta’ovala is often replaced by a black armband for men and a brooch of black ribbons for women. Occasionally, relatives will cut their hair to demonstrate their grief and will do so in a traditional singeing with a burning stick.

There are no direct flights from the USA, but Tonga is served well via Hawaii, Los Angeles, Auckland, Sydney, Fiji, and Samoa on Royal Tongan Airlines, Air New Zealand, Air Pacific, and Polynesian Airlines.

Flights in the Pacific can be expensive. Inquire about Air Passes and discounts.

Temperatures range between 18C (65F) and 30C (86F), June to August being the coolest period. Avoid the typhoon/hurricane season: November through April, the wettest months.

VISAS AND DOCUMENTS
None required. Present a valid passport and onward ticket upon arrival for stays of up to 30 days.