Hungary‘s Soviet past is expertly both commemorated and commiserated and it is possibly the most well-preserved of all the Eastern Bloc countries.

Call us dark and sinister but the following two attractions made interesting and thought-provoking additions to our city break in the beautiful and atmospheric city of Budapest.

My husband and I certainly got more from our trip for learning about this depressing history, getting a bit of a shock, and gaining a chilling perspective on when politics go very wrong indeed…

The House of Terror is a sobering, chilling attraction. Its history as the headquarters of the Hungarian Communist Party, and later as the Soviet headquarters in Budapest, is showcased in a tangible sense with artifacts, films, preserved rooms, and basement cells.

Once inside the building, I wasn’t to be fooled by its respectable address on an unassuming leafy avenue not far from the dignified Opera.

This building witnessed truly terrible acts of violence, domination, and systematic corruption, which became all too evident from our tour of its cellars in the basement.

As I laid eyes on the disgusting conditions where non-conformists to Communism and suspects of the revolution were held prisoner in dreadful conditions with no daylight, no toilet, and just a plank of wood for a bed, I sensed a very real sense of terror.

As Richard playfully closed one of the cell doors while we were looking around I found myself inexplicably unable to be in that room with that door closed; I certainly felt something and it had a lot to do with the unbelievably cruel physical and psychological torture methods that took place in this very basement.

It was horrifying to see the actual execution room as it existed, and the miserable ‘cupboard’ where solitary confinement was so tiny that it forced a prisoner to stand for days at a time in pitch black, without even enough space for kneeling…

The House of Terror is a 2-minute walk from the Oktogon metro stop and is well signposted. It was a very educational experience and well worth the time and cost. Tickets are around £10-15 per adult and student discounts are available.

Tickets are around £10-15 per adult and student discounts are available.

Strolling through Memento Park with its preserved communist statues was a strange experience.

Striking likenesses of prominent figures such as Lenin, Stalin, and even Stalin’s boots made their presence known to us in the wide-open space on the edge of the city limits.

The many huge statues and sculptures were once placed around the city in Soviet times, imposing on and terrorizing its inhabitants.

Wandering around at a leisurely pace I found it hard to imagine them as anything other than grave reminders of a sinister past.

Wandering around at a leisurely pace I found it hard to imagine them as anything other than grave reminders of a sinister past.

The many huge statues and sculptures were once placed around the city in Soviet times, imposing on and terrorising its inhabitants. Wandering around at a leisurely pace I found it hard to imagine them as anything other than grave reminders of a sinister past.

The many huge statues and sculptures were once placed around the city in Soviet times, imposing on and terrorizing its inhabitants. Wandering around at a leisurely pace I found it hard to imagine them as anything other than grave reminders of a sinister past.

After admiring the gargantuan sculptures we visited the indoor exhibition space which showed an entertaining film and artifacts concerning the Communist spies, giving us a different insight into being a spy for the Communist Regime.

The gift shop housed a wide range of curious Soviet memorabilia, and the Soviet CD which was playing added to the echoes of a politically charged atmosphere.

The park can be reached by bus from Ujbuda Koszpont outside the shopping center and takes about 20 minutes. Entry costs less than £10 per adult.

What better place to relax and unwind than this stunning spa city’s historic baths. A small number of Turkish Baths more than 400 years old remain,

such as the Rudas Baths on the Buda side of the river. Richard and I opted for the beautiful Neo-classical Gellert baths adorned with colorful mosaics, in the Gellert hotel on the Buda side opposite distinctive Liberty Bridge.

We aimed to spend just a few hours but ended up whiling away the entire afternoon soaking in the mineral-rich water and plucking up the courage to run from the steam chamber to the ice-cold plunge pool!

Eating Out in Budapest

Our favorite little restaurant was the traditional and aptly named ‘Paprika.’ The food was deliciously flavored and the country-style decor made us feel right at home. We were lucky enough to stumble across this place on our first night, just down the road from our hotel ‘Mirage Fashion Hotel’ at Heroes’ Square (Hosok Tere).

I was so glad we did, as the next few nights after that the place was packed and they couldn’t fit us in without a booking.

Another favorite of ours was Robinson – a beautiful and classy mid-range restaurant set on a miniature island, with an emphasis on fine wines and perfect cuts of meat, and wonderful flavors. My steak was indescribably tasty and cooked to perfection. The restaurant had a fantastic atmosphere and the service was impeccable.

Performances at the opera are surprisingly cheap, and not so surprisingly, very popular. We managed to get tickets for a fantastic Ballet we hadn’t heard of, on the day of the performance. We did end up with one seat behind the other, however, these turned out to be in the upper dress circle with no seats in front, so we moved them slightly to our preference – oh and they cost just £20 each! It is even possible to get obscured view seats for just £5.

Other Attractions & Out of Town

The city’s parliament building (inspired by Westminster) is a striking building of gargantuan proportions. We enjoyed the view best from the River cruise as it is situated right in front of the water.

Castle Hill and the short 1800s funicular railway up the Buda Hillside afforded us magnificent views of the city at dusk – the beautifully lit buildings gleaming in the half-light.

We reached the impressive Gothic Mathias Church further up the hill and stood gazing up at its detail.

There was a sort of medieval music playing across the courtyard and people milling around admiring the view from the various turrets around the church.

Visegrad town is situated on the Danube river, bending around the hills. The view from the castle at the top is supposed to be magnificent.

We took the train which was around half an hour however we ended up in a village opposite the actual town on the other side of the river.

There was a boat across but it was a bank holiday and there was just one so we decided to go for a walk in the hills and catch a view of the river bend.

A day or two in majestic Vienna makes an exciting trip from Budapest and it is just a 3-hour train journey. Our tickets included the metro so we headed straight to the center and enjoyed stunning sights, shopping, and divine artisan chocolate, as well as a trip to the 3-floor flagship Swarovski store and a tour around Mozart’s home which has been turned into a fantastic interactive museum.

Our trip to Budapest felt like a really educational experience, packed full of culture and delicious food! It is imperative to mention at this point that we saved the House of Terror for the last day so as not to set a macabre tone for the rest of the holiday! 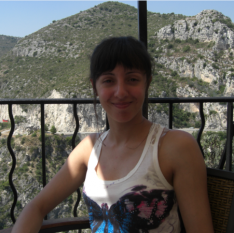 Lise Griffiths travels the world as an obsessive-compulsive travel addict. She is from England.