Channeling the Cherokee Spirit on the Cherohala Skyway

Southeastern Tennessee existed in my mind as a series of winding, twisting roads chocked full of motorcycles to be endured to go whitewater kayaking.  That was until I happened to drive on the Cherohola Skyway on my way to the Tellico River.

The road connects Southeast Tennessee to Western North Carolina, and was named after the Cherokee and Nantahala National Forests through which it crosses “Chero. . . hala.”

The road opened in 1996 and was soon after designated a National Scenic Byway.  The mountains here are a bit taller and more remote, the lakes are noticeably clearer and greener and the rivers a tad steeper and more dramatic than in the rest of Appalachia.  The drive treats you to one amazing view after another, as you ascend peaks up to 5390 feet.

The views along this road are nothing less than awe-inspiring, but even more intriguing are the subtle hints of the Cherokee in these parts.  Motorists aren’t bombarded by billboards advertising commercial reenactments or tourist traps thinly disguised as reservations.  Like the scenery, the presence of Cherokee can be found all around.

The street signs are written in both English and Cherokee.  In fact, the namesakes for the very land, rivers, and mountains in this area are derived from Cherokee words.

When I heard that parts of the now Cherohola Skyway were once used by the ancient Cherokee as footpaths, I was less interested in rushing to the rivers to kayak and more curious to explore and find out more about the native people who once called these mountains home.

History:   Or How the Cherohala Became a Skyway

The people who called the rural communities in Southeastern Tennessee home felt isolated and desired to be connected to nearby mountain towns.

In an effort to gain publicity for the need for a road linking Tennessee and North Carolina, at a Kiwians meeting in April 1958 a local resident suggested club members organize a wagon train “since our roads are only fit for covered wagons.”   On July 4, 1958, residents began an annual wagon train trek through the mountains.

The first wagon train consisted of 67 covered wagons and 325 horseback-riders.   They left Tellico Plains, NC on a 42-mile journey to Western North Carolina.   By 1967, the 10th anniversary of the wagon train, the road was finally under construction.   The wagon wheel tracks of the annual trek created the skyway’s original path.

The Cherokee once lived in these mountains.   They carved out a life in this harsh country by growing crops, hunting, fishing, and gathering wild foods. The largest Native American group in the U.S. and formerly the largest and most important tribe in the Southeast, the Cherokee tribes spent centuries in Southern Appalachia.

The Cherokee left their mark on this area.   Tennessee was actually named after the first capital of the Cherokee nation “Tanasi.”   In this area, so many of the rivers, forests, and mountains received their name from the Cherokee language.   The fact that the Cherokee is all due to one man, his name is Sequoyah.

In all of history, it’s taken the contributions of many minds over the course of hundreds of years to develop a new language.   Sequoyah developed the Cherokee syllabary in just 12 years.   He created 86 symbols, each representing a unique sound of Cherokee speech.

The idea of seeking out a “wilderness experience” or spending time in nature would have been absurd to the Cherokee.   The Cherokee did not – and in fact could not – relegate the outdoors to a small place or time in their lives, so intertwined were their lives with nature.   The Cherokee believed that the eagles, deer, snakes, fire, creeks and mountains had an intelligent spirit, which played a role in Cherokee myths and daily practices.

Five Must Stops Along the Cherohola Skyway

For a day, we channeled the Cherokee and paused to wonder, if the trees could talk, what would they say?   If the creeks could whisper what secrets would they share?   In order to find out, we relished in the delicious cool of mountain streams as waterfalls massaged our shoulders, we wondered how the balds came to be at tops of mountains, and we marveled at the tall trees.

Bald River is a powerful, dramatic short river.   Just before Bald River joins the Tellico River, Bald River cascades over 100 feet onto the rocks below, one of the most impressive and scenic waterfalls in Eastern Tennessee.   The falls can be viewed from your car, but it’s worth it to park and hike down to the falls to swim in the pool below or hike on the trail above the falls, which follows Bald River for 5.6 miles through deciduous forests (rated a moderate hike).

2.   Swim in Indian Boundary Lake:   Indian Boundary Lake covers 96 acres and sits at an elevation of 1,560 feet, nestled between hardwoods and pines.   The lake offers a swim beach, a picnic area with grills, and a 3.2 mile hiking and biking trail around the lake.

To get there, drive East on the Cherohala Skyway for sixteen miles.   Turn left onto Forest Road 345 and travel two miles to the entrance.

3.   Hike to Balds :   Balds are a mysterious phenomena in Southern Appalachia.   At heights where one would expect to find large trees that otherwise grow in the Appalachia mountain chain, on some mountain peaks there are grassy meadows covered with dwarfed trees, shrubs, and grass like tundra instead.

Theories abound as how the balds came to be.   One theory is that winds caused forest fires started by lightening to spread and the trees never grew back.   Others believe that early Native Americans cleared the balds for ceremonial or hunting grounds.

Stop at Hooper Bald at 5,290 feet.   The parking area is on the right side of the road, and there are picnic tables and restrooms here.   Hike the ¼ mile long trailhead to the bald, where you can come up with your own explanation for how the balds were created.

4.   Gape at the Mountains:   For a peak experience, stop at Santeetlah’s Overlook that, at 5390-foot, is over a mile high.   On a skyway full of beautiful views, Santeetlah’s is a must-stop.   Looking out at the cloud-covered Great Smoky Mountains and the upper Santeetlah watershed, there is little evidence of civilization.   This vantage point provides the same view a Cherokee would have had, offering a fundamental glimpse into the lives of ancient Cherokee people.

Because although white men have come and destroyed forests to build towns and changed the landscape in many areas, these very mountains and hills remain the same.

Where the views are so uninterrupted, it becomes plausible to imagine living as a Cherokee.   The expanse of the view reminds an onlooker just how magnificient the world is, and just how small our own place in it is.   Santeetlah’s Overlook is at mile 11 on the Skyway.

5.   Marvel at the Big Trees:   Joyce Kilmer Memorial Forest offers a rare chance to walk among gentle giants in a virgin hardwood old-growth forest.   Magnificent hemlocks tower above, some of which are over 100 feet in height and 20 feet in circumference.

This is one of the few old-growth tree stands left throughout Appalachia and the Blue Ridge Mountains.   The hemlocks here escaped the logger’s saw due to the remote mountainous locations, making the effort cost prohibitive to logging companies.

Along with the hemlocks, some 100 species of trees can be seen at Joyce Kilmer, including poplar and oak.   A two-mile, moderate grade loop trail, Joyce Kilmer National Recreation Trail, will take you into the heart of the forest.   For the avid walker, there are more than 60 miles of trees in the forest.   The forest was named after the poet Joyce Kilmer, who wrote the poem, “Trees.”

To get there, just past Santeetlah Gap overlook and the end of the Cherohala Skyway, turn left onto Joyce Kilmer Road.

To learn about the history of the Overhill Cherokee, including their family life, customs, beliefs and the Trail of Tears, visit the Sequoyah Birthplace Museum, the only tribally owned and operated historical attraction in the state.

The first weekend after Labor Day, they hold the Sequoyah Arts and Crafts Festival, where you can experience Native American food, view arts and crafts demonstrations, and listen to native music and watch descendants of ancient Cherokees perform traditional dances.

Indian Boundary Campground is located just off the scenic Skyway on Forest Service Road 345.   The campground has 100 campsites and is open from April through September.   Reservations are recommended.   For reserve your spot, call the Tellico Ranger Station at (423) 253-2520.

Tellico Kats on the River offers picnic box lunches along with a scenic river backdrop for meals enjoyed at the restaurant, located at 1829 Cherohala Skyway, Tellico Plains, TN and the phone number is 423-253-3411.

Tellico Grains Bakery offers sandwiches and baked goods, along with pizza on Saturdays.   The bakery is located at 105 Depot Street, Tellico Plains, TN, (423) 253-6911 or .

The best places are often the hardest to reach.   The Cherohala Skyway is no exception.   Take your time, bring plenty of food and water, and fill up your gas tank.   Restrooms are few and far between on the Cherohala, and there are no stores or gas stations along the skyway.   For your efforts, you will be rewarded with some of the breathtaking views and offered a glimpse into the lives of the ancient Cherokee people. 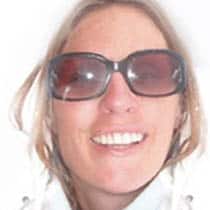 Ky Delaney enjoys the outdoors with her one year old baby.  Meghan Rolfe, a photographer in Asheville, North Carolina, took the photos in this post and you can check out more at her website.