A River of Sheep to be Shorn in New Zealand

New Zealand:   The Running of The Sheep

There is a noble event which occurs annually in the New Zealand autumn which eclipses all others.   It embraces the hospitable demeanor of the Kiwis and their oddities.   It is an expression of their culinary genius,

music and culture.   It it smells of rich street food and. . .wet farm animals.   It is, the Running of the Sheep in Te Kuiti!

This last Saturday I had the privilege, nay, the honor to experience this event in all its glory.   The scattered showers intermittently drenched the town of Te Kuiti, myself, my new camera, three goats and a few hundred nervous sheep.   The tension was palpable, so I had a corndog.

At two o’clock, the anxious farm animals would be set loose on the village streets.   They are steered through the town center by farmers, shop owners, children and bewildered city slickers, separated from the snarling flock by a long, thin piece of black tarp.

One slip of the hand, one distracted child and the unthinkable could occur —“we be chasing down sheep all over town for the rest of the day,” announces the MC.   “And they’re off!   No wait, they’re running in circles.”

All it takes is for the opening down main street to register with one sheep and they will be off!   It’s two fifteen.   I have another corndog.   We wait.   “They’re off!   No wait, that’s a goat!   That is not a sheep.   I am pretty sure that is a small black goat!”   The MC is describing the scene from a safe location well above sheep and goat level.

A small black goat appears running down the street.   It is immediately followed by a wet mob of frenzied sheep.   Finally!   The children are caught unaware.   The crowd rushes to raise the side walls as most had wandered off for the amazing corn dogs and beer.

The city slickers drop the side walls and raise their iPhones in time to see on its screen that they have just made a poor choice.   The farmers go back to their naps.   The sole photographer/author of this article drops his corndog.   The sheep run on.   There are small poops everywhere.

As the stampede is corralled into a holding area, the professional shearers prepare for the competition.   The sole photographer/author was not prepared for this and is thus startled when a burly Kiwi saunters into the herd, abducts a wet, distressed creature with a bear hug and drags it to the side.

The photographer/author is relieved that it is only a shearing contest.   Assuming this was a job well done, I see the wet, anxious creature, now bald, returned to the herd, and three goats.

This continues through random showers and sunshine until it is time for the sheep to be released—again.   A video camera and nervous reporter assume their positions in the middle of the street which looks suspiciously to me like the worst possible location downstream from a few hundred wet, bald and now quite pissed off sheep, and three goats.

The gates are open and. . .”well folks, this is what happens when you deal with farm animals,” the MC announces.   Ten minutes pass.   I buy a corndog, which of course triggers the stampede.   The cameraman and reporter discover it was indeed the worst possible location for this story.   The local children are entertained by the drama that ensues as the news crew narrowly escape.

The herd is now funneled through a chute out of the holding area and on down the street.   Everything appears to be going well now.   There is a break in the sidewalls, and the sheep are loose.   They are confused by street signs and decide that instead of merging left, the best choice is to become airborne.   They all go airborne.   The goats have figured this game out and are now enjoying corndogs on the sidewalk.

The event has sadly drawn to a close and the last sheep and goats have navigated the chute or the improvised alternate route.   The news crew is humbled and earnestly searching for job openings on their phones.   Two sheep-dogs follow the flock on out of town.   There is no truck to gather them, no farmers to guide them.

Sheep, goats and dogs are headed for the highway.   I nervously ignore this fact, finally enjoy a corndog and walk back to the car.   The smells of wet sheep, corndogs and poop linger.   The wet streets fill with people again and the band resumes the music in the now humid air.   The flock disappears to some undisclosed location.   Until next year, they are on the “lamb” (you saw that coming, right?).

The Accommodation and Information

This event occurs in early April every year.   More information on the 2017 Great New Zealand Muster.

Located about 2.5 hour drive from Auckland, Te Kuiti is easy to get to (if you are comfortable driving on the left side of the road and navigating roundabouts).

There are multiple travel lodges and bed and breakfasts in the area, notably Simply the Best Bed and Breakfast located on a farm just outside of town:

This and other lodging options in the area run around $70 USD per night, but fill up fast during The Great New Zealand Muster. 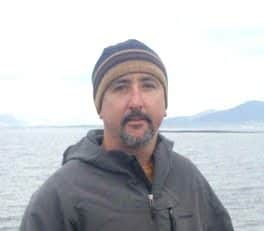 Adam McGhee wants to remain on the run from the real world for as long as possible, while nursing a cubicle phobia.   He is a moderately published writer and a fledgling photographer, with a vast amount of education related to little of value.   He enjoys running semi-daily, has an addiction to the smell of old books and a weakness for Irish Pubs. He has been on a 15-month long international trip, and currently is traveling the US in a camper van. He’s originally from Kapolei, Hawaii, where he says he’ll eventually return.