Belize may be a small country but it delivers big adventures, both coastal and inland.

Diving bodies should wait 18 hours before flying but when ready, George and I bid Ambergris Caye farewell for the broadleaf jungles of Central Belize.

For $114 per person, a fourteen-passenger aircraft operated by Tropic Air delivers us from San Pedro to the Belize capital of Belmopan in 30 minutes.

A driver arrives by van from another VIVA Belize flagship property, there are seven in total. We hop aboard for a short drive to the Sleeping Giant Rainforest Resort.

About a mile shy of the turn off the driver points to the foothills of the Sibun Nation Forest Reserve.

On the horizon is indeed the profile of a sleeping giant reminding us of the fictional literary classic, Gulliver’s Travels.

Keith the bartender welcomes us with an umbrella-dipped Piña colada while the Lodge Manager, Eugene Baptist, helps us to our Spanish casita.

Inside we’re greeted by bath towels arranged in the shape of swans (creative housekeeping), faucets that flow like waterfalls and LED-lit hot tubs. Everything is adorned with fragrant, red Hibiscus pedals.

The romance and matchless beauty of this place make it the perfect honeymoon hideaway…and the official base camp for National Geographic Expeditions!

“Guests really feel like they are part of the jungle here. It’s why we receive tourists from all over the world.

For the next two days, George and I take in as many recreational activities as possible.

On property, we kayak upstream on the Sibun River basin,  A trail of flower petals leads to the rain showers. then hike above the rainforest canopy to the gazebo, and finally cool off in the infinity pool. I never did find time to lounge lazily on the hammock outside my casita.

As for cuisine, lunch, and dinner dishes, all are quintessential native favorites sourced from organic gardens and community farms. Every night the chef prepares something traditional or pan-Belizean.

We especially like the Cochinita Pibil (pork dish) and steamed tamales wrapped in smoked plantain leaves with Creole bread and rice-and-beans.

For breakfast, we indulge in fresh star fruit, avocados, grapefruit and a new favorite legume, jicama – a crispy, sweet, edible root that resembles a turnip. George adds chili pepper and lime juice to the afternoon snack.

“A lot of people want the jungle experience but are thankful at how exquisite this lodge can be. Even the locals have never seen anything this special,” says Baptist.

A night trek for indigenous nocturnal critters like snakes and bats proves just as exciting as diving with sharks and turtles.

Our Nature Guide, Edgar Martinez, requires us to don a headband attached with a small flashlight. As we move quietly along a ruddy and muddy trail we catch glimpses of exotic activity.

Our lights catches the glare of the giant wolf spider. Martinez explains that the spider has keen eyes, like that of a cat, that glow in the dark.

Two of the eight eyes, those in the middle, contain discs that reflect light from our flashlights. We find the silk-spinners lurking on giant ferns and palm branches.

Martinez suddenly turns his flashlight off and asks us to do the same with our headlamps. Under a night sky of twinkling stars, we listen to the hoots of a mottled owl, chirping bush crickets, and the distant cacophony of howler monkeys. During the day, the verdant rainforest feels friendly and inviting but, at night, it feels like a voracious carnivore stalking our every move.

Nearing the end of our trek, George takes a tumble down a steep part of the trail and lands on a slippery rock. His pants are soiled but, other than his pride, nothing bruised or broken. Thankfully this is the only risk migrating in the wild tonight.

The night hike on spider-infested slopes segues nicely into cave tubing in the dark with swooping bats. If your skittish about drifting down a river where ceremonial bloodletting was commonplace, well, this subterranean adventure might not be for you.

Exploring the Mayan underworld is a popular day trip for guests at Sleeping Giant. Ours includes a private trek to St. Herman’s Cave at a national park just off Hummingbird Highway.

Under the Belizean antiquities law, the caves are controlled by the Institute of Archaeology, a department of the Ministry of Tourism. Removal of earth, stone or Mayan relics is strictly prohibited.

“It’s very rare to find human remains in these caves, rather there are hundreds of pieces of stone pottery buried everywhere. It was part of the Mayan ritual to shatter the collection vases where the blood was stored,” informs Deras.

The outfitter provides us with sturdy footwear and black inner tubes for a ‘speleological experience of a lifetime’. The Maya used torches to navigate their way through this cave, we use headlamps for ducking under low calcified ceilings and falling bat guano.

And unlike the Maya who were under the influence of mind-altering herbs or drunk on fermented beer when they entered the cave, our small crew are as sober as they come.

While we walk the first half our guide launches into a science lesson on how acidic rain forms caves. Icicle-shaped stalactites hang from the ceiling like soda straws, not unlike those in the Great Blue Hole, while another mineral deposit called stalagmites emerge from the ground to stand up straight like traffic cones. The two formations are collectively known as dripstone. 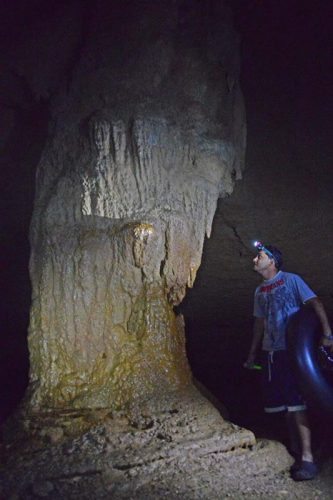 “That’s all very interesting but, what about the snakes?” asks Pam, a mom from Boston who wisely pulled her two kids out of school so they could interact in a real science lesson.

“We have bats, scorpion-spiders, centipedes, and lizards but, you’re in luck; no snakes,” smiles the guide.

The attraction can be arranged through the Sleeping Giant Resort Lodge. Follow up the tubing with a swim in the inland Great Blue Hole. The Caves Branch River, a tributary of the Sibun, hovers around 76-degrees but cool spots keep us questioning if spirits might be lingering.

The guide takes us further. We’re finally able to plop our bodies into the tubes and lock legs over arms to form a queue. The guide pulls us forward against the current.

The roar of the mile-long river is deafening and at the source, we extinguish the pale glow of our headlamps and listen to the turbulence. It’s quite exhilarating.

One tube after another now proceeds to follow the guide back down the river. He shouts instructions on when and where to avoid dangerous obstacles. If a sharp column appears in our path, the words “Butt Up!” bounces through the tunnel.

The current picks up around corners and some of us are spinning like tops. Spooky shadows bounce off glistening walls that look like diamond booty. The spiritual ride comes to an end far too soon as does our beautiful adventures in mainland Belize.

It seems the longer we stay in Belize, the better the experience. A life swap for sea, sand, and sunshine might actually be worth the lack of pastry supplies agrees  Klauber. And like the motto says: Belize, it’s closer than you think!”