The Midwest may be known for a lot of things. But pulsating adventure travel?

Bucking the trend of a slower Midwest pace, this stretch of South Dakota is fast repositioning itself as a travel adventure hot spot with one big perk: Fewer people competing for wide-open space.

Situated within one of America’s least-populous states, this westward-leaning wonderland has plenty of playing room for adventurers – trekkers, bikers, and scenic-view likers — seeking rigorous and uncrowded outdoor travel options like exhilarating hikes, plus mountain bike and off-road vehicle trails.

Cross over into the western part of South Dakota, where prairie land gives way to rocky, pine-filled terrain, and plenty of adventure, past and present, awaits.

Get your fill of this adventuring past in Deadwood, named by 19th-century miners for the dead trees found in the town’s gulch.

Then climb Mount Moriah by the edge of town, where you’ll find the graves of two of Deadwood’s most famous residents of yore – Calamity Jane and Wild Bill Hickok. In the years following Wild Bill’s death, Deadwood continued to grow, thanks to a burgeoning new railroad line that ran through the center of the Black Hills. The line was abandoned nearly 100 years later, then converted into a 109-mile bike trail.

Called the Mickelson Trail, the bike path mixes history, views of pines and mountain ranges — along with short distances from nearby attractions like Crazy Horse — into one long, scenic two-wheeler ride.

The 20-acre vineyard and brewery, located about an hour from Deadwood, in nearby Hill City, is one place to catch your breath before exploring Custer State Park by UTV, courtesy of a rental company that operates by the edge of the 71,000-acre park.

Cut across rugged, rocky paths by open off-road vehicle –the only other soul you may well encounter for miles on end are cattle and deer grazing nearby.

Highest Point East of the Rockies

To really conquer South Dakota’s Black Hills, take a hike to the top of Harney Peak. The summit, 7,242 feet high, is the highest point in all of South Dakota – and the tallest peak in North America east of the Rockies.

But first, take a drive along Needles Highway – a National Scenic Byway that lives up to its name, with granite spires lining the way – to reach one of two trailheads that lead you to Harney Peak in Custer State Park.

Once you’re there, the moderate hike, which runs into a designated wilderness area in Black Hills National Forest, leads you on a roundtrip six-mile journey. At the top of Harney Peak you’ll find a tower, and at its base, a tree with kerchiefs tied to it by hikers in a much-deserved show of accomplishment.

But the highlight of any South Dakota Black Hills adventure may well be a helicopter tour of the state’s greatest landmark.

Considering the scope of Mt. Rushmore – each of the four presidential figures carved into the granite spans 60 feet high – it makes sense to tour the massive landmark by air. One company, Black Hills Aerial Adventures, offers tours of this stretch of the Black Hills. Copter expeditions also include a close-up view of another monumental achievement: the Crazy Horse Memorial, which stands as the largest ongoing sculptural endeavor in the world.

Another epic treat – of arguably global proportions – are the billboard signs that run along I-90. They may simply advertise some variation of, “Wall Drug,” but what began as the brainchild of a local woman who wanted to spread the word of her husband’s drug store back in 1931, have since proven so popular that people worldwide have photographed themselves with the Wall Drug store sign in hand.

Learn the story of Wall Drug in nearby Wall, S.D., where you will, quite literally, find nearly every type of American Old West memento, courtesy of a massive, nearly 50,000-square-foot store that includes western wear and – two Wall Drug favorites – donuts and five-cent coffee.

You’ll want that coffee bright and early for a sunrise tour of nearby Badlands National Park. You’ll understand why the nearly 243,000-acre expanse, home to eroded buttes and spires hundreds of millions years old, has been the filming backdrop to sci-fi flicks, as you walk among rock formations that change from blue to pink hue with the rising sun.

A Black Hills travel adventure also comes in fine-tuning your outdoor skills. At The Outdoor Campus, the focus isn’t just on nature – nearly every state has a nature center – but on experiencing a “consumptive” view of wildlife. That means “catch it, clean it, cook it” – and this 32-acre facility, located outside of Rapid City, shows you how.

In between taking classes on skinning, hunting and fishing, visitors can kayak in a lake right outside the center, while the largemouth bass jump from the cool water.

By evening recharge in nearby Rapid City. Restaurants along the historic Main Street offer plenty of caloric compensation after a day of hard-earned travel adventure – all wild and expansive, and completely South Dakota style! 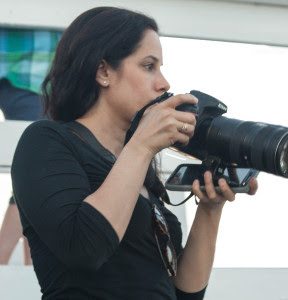 Lisa Singh is a travel writer and editor based in the Washington, D.C., area whose articles and photos have appeared in media outlets including USA Today, The Washington Post, and Travel Channel. Visit her website here.