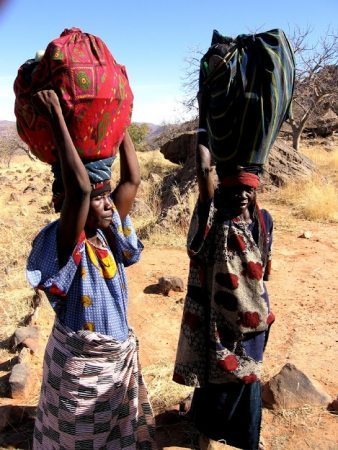 An African jewel lies on a sun-baked plain of Mali near the banks of the Niger river, swathed in the haze of cooking fires and blowing sand; a city made of mud that defies all description.

Djenne is a flyspeck on a map, overlooked by most travelers, a haven to bandits and smugglers, and a photographers dream. But until laying eyes on its surreal beauty, with its otherworldly mosque, one can have no idea how it captures a person’s soul.

The city was founded around 800 AD by merchants on the site of an earlier settlement that dates back to about 250 BC, as a gathering place for the traders of caravan routes coming out of the Sahara and Sudan.

It thrived because of its proximity to the Niger, thus linking it to Timbuktu, and the routes coming to and from the north, hauling gold, salt, and slaves.

For 180 years it was under Moroccan control but was conquered by the French in 1893 when its commercial functions were transferred to the nearby port city of Mopti.

It has long been a center of Islamic learning, and still offers three separate madrassas, one specifically for children too poor to pay for their lessons which are given gratis.

In yellow twilight the perpetual haze of blowing sand has taken the edge from everything, bathing the city in an eerie glow her mud streets are deeply lined, not only from tire tracks, but those of donkey carts, camels, goats, and the bare feet of millions of pilgrims over hundreds of years. The earth in Djenne is a mixture of sand and dung and like most Malian cities, it is made entirely of mud, but that is to say the Taj Mahal is built only of marble.

Her ancient curving walls and leaning minarets bring to mind the Spanish architect Gaudy, having a bad dream, but on a good day.

To enter the gates of Djenne is to enter a page from the Bible where time has stopped before man has  had the opportunity to damage to the earth. It is not just ancient, it is otherworldly.

Children run alongside our rover, hands outstretched for whatever we may offer because in this city, to ride in a vehicle is to be rich beyond belief.

We pick our way between the street vendors and nomads, stray dogs and camels, winding into the town square where they will all sleep under the stars, eager to pitch their stalls and begin the weekly market in the morning.

Long robed silhouettes passing to and from in the twilight, give an ominous feel to the scene. The town is crowded and noisy. The air is filled with smoke from both cooking and campfires, and over it all, the call to prayer finds my ears, making the final statement about where we are. We have driven from a modern city, back a thousand years in time.

I have been told that most of the populace is armed, and settle disputes in the old way, with a sword or knife. This is a subtle reminder to behave ourselves, since under strict Islamic law, theft is punishable by cutting off the right hand, and adultery is an offense that can still get one stoned to death in a public square.

Scourging is reserved for more minor offenses. It is punishment that endures for life, because in Islam, one eats with the right hand and washes oneself with the left after using the bathroom To lose one’s right hand means eating with the left, and forever being ridiculed in public for having to do so. Such punishment, while severe by our standards, has done little to stem violence in this part of the world.

The current mosque was begun in 1906, finished in 1907, and is the largest free standing mud building in the world.

It is on the site of the palace of Sultan Koi Kunboro, who was a convert to Islam. In 1240 he turned his private palace into a mosque. By 1830, a Sheik Amadou, then the ruler of Djenne, considered it too opulent for a mosque and allowed it to fall into disrepair while building another, less glamorous one, next to it. Needless to say, neither of these predecessors survives today.

Todays’ mosque sits on a raised platform and is made of sun dried mud bricks with mud mortar. I guess it to be about four stories tall. The walls vary from about 16 inches to 24 inches, depending on the height of the individual wall and the massive thickness acts as both support for the ceiling and insulation from the heat of the day.

Its minarets have ceramic caps, made by the women of the village, and these can be removed to ventilate the interior of the building. On top of the various towers sit ostrich eggs, which are a local symbol of fertility. In this part of the world, Ostrich eggs and cowry shells abound and are used to decorate anything and everything.

The massive walls are studded with wooden beams protruding through to the outside. These are not just ornamental. When the rains come, much of the building is washed away. There is a week-long festival every year in which the entire village climbs on these wooden beams to re-plaster the outside of the mosque. The building occupies more than 16,000 square feet, and centered as it is amongst tiny little houses, appears more like an apparition than a place of worship. From any angle, it is a towering presence that dominates all of Djenne.

It was open to all who wished to enter for many years until 1997, when for reasons unknown, the city elders allowed French Vogue magazine to enter for a photo shoot. Obviously the powers that be had never seen Vogue before issuing this decree. When the French hordes descended on the building with their scantily clad models, billows of Gallouse smoke, and lunch breaks that included vast quantities of Merlot, the Elders withdrew their offer, banishing not only the French magazine, but all other infidels from entering it again. Today, that issue of Vogue is considered a collectors item.

The last rays of the day strike the building, turning it a deep golden brown as the final call to prayer issues from the mosque, filtered through the thick mud walls of my room. I drift off to sleep counting the spiders crawling across my ceiling.

My wanderings have take me through the back alleys of the city and I turn a corner to enter an alley not yet touched by the sun. It is dark and cool, and casts an eerie feeling as I approach an alcove mostly hidden in shadow. The people here are not merchants, and I think perhaps I have made a wrong turn into a place I should not be.

Besides the reek of human waste, there is a fog of incense and various other burning objects whose smells I cannot identify. Shafts of sunlight cut through the darkness accentuating the malignant atmosphere as I take a few tentative steps inside.

In one corner sits a Boujou medicine man, identified by his elaborate costume of mirrored hat with tiny animals’ horns, and numerous amulets and bracelets to ward off evil spirits. He is perched on top of several old leather pillows and has toenails longer than my fingers. His clothes appear to be oilcloth, and I can smell his stench from ten feet away.

He watches me as I approach, his body unmoving, his head stationery, while only his black eyes track me, like a cat stalking prey. He shrieks when I raise my camera and I stumble backwards. His eyes are vacant, blank, and I think he is in his own place at the moment. Then I smell the khat, a strong local weed, stronger than marijuana, and know that accounts for his glassy-eyed stare.

Besides the ethereal beauty of the city itself, Djenne is a place of power and magic. It holds violence and death, mystery and intrigue, and is a part of old Africa that will likely disappear within my lifetime.

It is not a place for the faint of heart, but calls to pilgrims with an open soul and mind.