It was a summer made for a carefree adventure. I would have the longest vacation block – three weeks – in 12 years.

It was high time the three of us took a trip together. The difficulty lay in finding an activity that would be sufficiently challenging and exciting.


Biking Prince Edward Island’s Confederation Trail seemed ideal on a number of levels. Relatives had given me L.M. Montgomery’s works as a child and I had loved them so much that by the time I was 14 I’d read 20 of her books.

I was curious to see the island where Anne of Green Gables was set that she loved so much. And what could be a more appropriate way of doing so than on a bike?

Never mind that the last time I had been on a proper bike was nearly two years ago and that “training” for the 273 kilometers (169 miles) trek adventure had consisted entirely of a 45-minute session on a stationary gym bike after which I pronounced myself entirely ready. I was excited by the assurance that the grade was no more than 2% up or down and galvanized by the company of two athletic teenage brothers.

“We’ll be losing all kinds of weight pedaling, so we can eat anything we want,” I told them happily, imagining enormous quantities of steak, seafood, and pancakes smothered in butter and maple syrup. And of course that famous PEI lobster and other seafood!

Although there are several bike companies that offer rentals and transportation, we decided that the cheapest option was to purchase three inexpensive bikes at the Canadian Tire Store in Summerside and keep them after the ride was over. Our parents, with whom we had driven to PEI, would drop us off at the start of the trail in Tignish and pick us up at Elmira five days later.

In the meantime, they and our youngest brother would camp toward the southern end of the island, at Linkletter Provincial Park, where we would try and meet up with them on the second night of the trip.

Finding the Beginning in Tignish 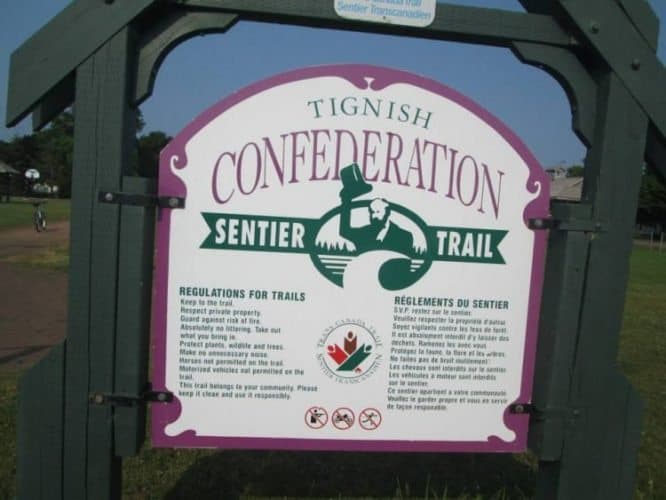 Day 1 Tignish. The start of the 273 kilometer 169 mile Confederation TrailResourcefully constructed out of the ashes of a railroad abandoned in 1989, the Confederation Trail serves as a biking/hiking trail in the summer and a snowmobile path in the winter.

My secret concern prior to commencing the trail was a danger of getting lost. Three years earlier I had completed Wainwright’s 192-mile coast-to-coast walk across England and was thoroughly humbled by how much compass work was required, as the English preferred that the Lake District retain as much “wildness” as possible.

To my intense relief, the excellent caretakers of the Confederation Trail had no qualms about marking the trail and neat sign posts were posted every kilometer. The trail is extremely well maintained, with surfaces ranging from crushed gravel to the island’s famous red dirt. Either side of the trail was covered with lush grasses and wildflowers, and rarely did we encounter any sign of man-made litter.

As the Tignish woman had predicted, the mosquitos were rampant, which the locals attributed to a record 18 feet of snowfall the previous winter. Our liberal application of bug spray proved ineffectual, and they proved particularly formidable at piercing through clothing. Some of the more benign wildlife we observed along the trail included frogs, fox, and a garden snake. Next time clothing and headgear embedded with insecticide might be an option!

During the first few hours of the day, we biked in a line abreast at a leisurely pace and talked. As the day progressed, we tried our best at harmonized singing, only to realize that none of us could accurately recall the lyrics to an entire song. At the 21 kilometer (12.5 mile) mark, we made a brief stop at Alberton’s fantastic bakery for fresh chowder and sandwiches before continuing on to the town O’Leary.

Had it not been a hot day, we might have been tempted to tour their potato museum, which claims to have the world’s largest collection of potato machinery and which boasts the world’s largest potato sculpture. An important part of the island’s economy, we felt we ought to pay homage. However, at the O’Leary gas station, we instead asked for lodging recommendations. 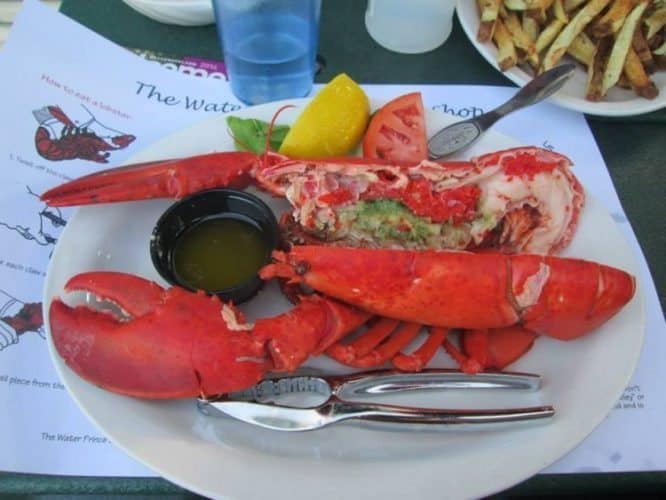 There is so much to commend the people of Prince Edward Island that it is a minor criticism to say that their sense of distance and time seems widely distorted. The locals claimed a nearby lodge was but a five-minute bike trip just up the road.

Twenty minutes later we were still biking along the shoulder of the road when we were overtaken by our parents’ van. As it turns out, they had taken the time to visit the O’Leary potato museum and assured us that it was well worth a visit.

The genuine hospitality of the Islanders can be attested to by the fact that we arrived at the Woodstock Rodd Mill River Resort with matted hair and bodies thoroughly grubby from sweat and dirt, and that there were wedding preparations taking place just outside the resort entrance.

Despite the marked contrast between us and the elegantly dressed guests, we were warmly received at the lobby, and the receptionist generously allowed us to store our bikes in their office.

The following day began with light morning rain. We reviewed the map and decided that rather than return to O’Leary to pick up the trail, we would shave several miles off the route by riding Highway 2 to the Linkletter campgrounds. Biking along the highway proved unexpectedly pleasant, both for the smooth and broad shoulder of the road, and for the great courtesy the drivers demonstrated.

At the Linkletter campsite we reunited with our parents, exchanged tales and washed clothes. After further paring down our load, we were unanimous that the one extravagant device we simply must have with us was a set of speakers to go with the iPOD.

Highway 2 had been provided such easy travels that on Day 3 we again decided to forgo the gentle 2% grade of the trail in favor of the rolling hills along the highway, from which we could better appreciate the hayfields, breezes, and observe more of country life. The cost to abandoning the trail meant that we would be pedaling in full July 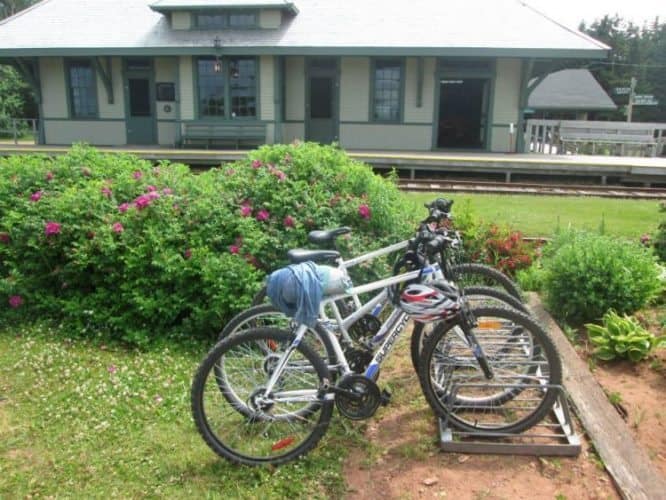 Just outside the Elmira Railway Museum.

Furthermore, the hills were at times steep and although the highest elevation in PEI is 153 meters (466 feet) we were thoroughly drenched in sweat as we rolled into Hunter River for lunch.

We celebrated the potato in good earnest that day, with chowder and poutine—french fries covered with cheese curds, gravy, peas, and hamburger; a thoroughly delicious and satisfying meal.

We overnighted at Winsloe B&B, just outside kilometer marker 176. Immaculately maintained, with fresh laundry hanging out to dry in the backyard, and with a nice big patio, it was the very definition of quaint.

After hearing from the hosts the proximity of the B&B’s to PEI’s capital of Charlottetown, we decided to stroll along the waterfront and treat ourselves to a lobster dinner and to a performance of Anne of Green Gables: The Musical.

Biking to the Music

Following a nice rest, after a breakfast of French toast, sausage, tea and orange juice we returned to the Confederation Trail. After the previous day’s hills, the mild grade was nothing by comparison, and we were astounded by how quickly the kilometer signs went past. We were aided, no doubt, by the music from the speakers my brothers had rigged, now crooning something from Taylor Swift, now playing Queen.

This day was to be the most scenically beautiful of the trip, and one brother announced the discovery of hundreds of wild strawberries growing on either side of the trail, luscious and delicious and about the size of a pinkie fingernail. Given that they were guarded over most jealously by legions of mosquitoes, it is only appropriate that their color was a vibrant blood-red. We ate as much as we could before finally being stung back to our bikes.

Our Last Day on the Trail
This fourth day of the trip is the only time the trail really hugs the water, and the views of St. Peter’s Bay were lovely ones, made even more lovely by strong cool breezes. Once again, we were fortunate to have found a B&B just off the trail, and checked in to Tir an Nog, run by two ex-patriots.

Our final day on the trail was uneventful and, at only 25 miles, the shortest leg of the trip. Despite finding still more ruby-colored strawberries we were unable to stop for any length of time to pick them before being picked at by those nasty guardians of the woods. It was with regret that we biked past them, and with no restaurants from St. Peter’s to Elmira we snacked on water, crackers, and bacon jerky.

Two miles from the trail a brother put on the theme song to “Rocky” and we saw the first visible signs of the railroad that had existed several decades earlier, and over whose path we had traveled.

It is fitting that the trail ends near a train museum. We had been advised by a trail organizer to ask at the museum for certificates commemorating our Confederation Trail ride and debated how much attention to give our appearance before presenting ourselves.

“Don’t look too clean,” we cautioned each other. “We don’t want them to get suspicious.”

We had made such good time that we arrived two hours ahead of schedule. As there was no restaurant or fast-food place after receiving our certificates we loaded up on potato chips and ice-cream bars from the museum and relaxed outside the building.

I thought of the hours we had spent each day pedaling, of the meals we had enjoyed together, of the hospitality and kindness we had witnessed, of evenings spent applying anti-itch /anti-sore cream and thought that we had succeeded—ours had indeed been an adventure.

As I studied the certificate, it seemed somehow bare, sterile, and incomplete. Spying a hateful mosquito hovering just above my knee I slapped it and then pressed it against my certificate, where it stuck nicely, the perfect exclamation point to an unforgettable summer trip. 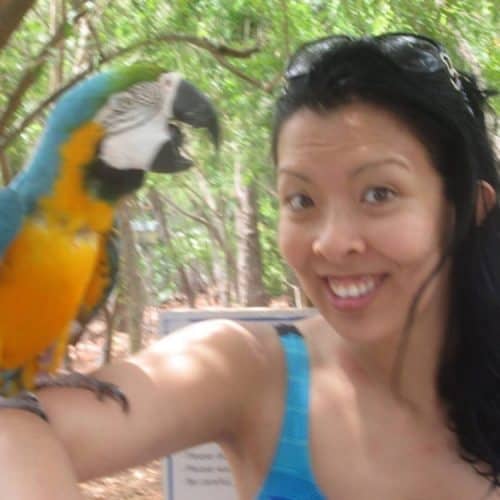 Katie Cerezo is a U.S. Naval officer who has lived in four countries and visited 37. In her off-time she enjoys hiking, kayaking, and self-propelled adventures. She loves the educational value travel brings, and looks forward to experiencing many more cultures.